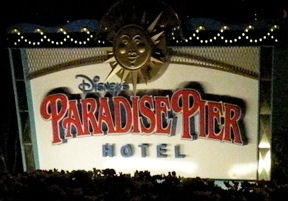 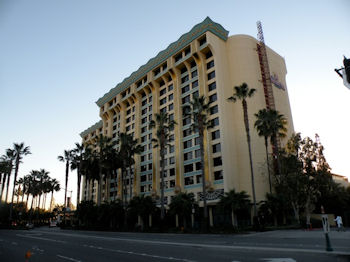 We booked a Concierge Theme Park View room with an annual pass discount, so we checked in on the second floor in the lounge. Due to a shortage of our room type, we were upgraded to a Family Suite with a gorgeous view of the back side of the World of Colorshow. I wanted to include this information because we did not experience the same check-in experience or room type as normal, but I want to say that I never saw a lengthy line at the front desk in the lobby. Also, when there was an increase in the number of people checking in, there always seemed to be an increase in the number of Cast Members at the desk. 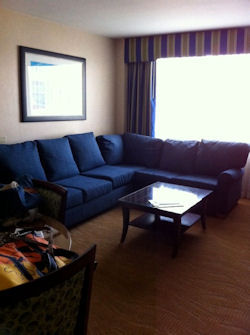 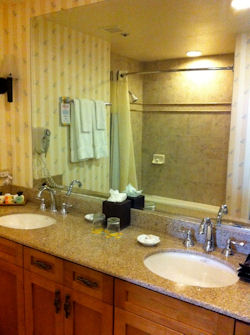 The sitting room and bathroom in the family suite. 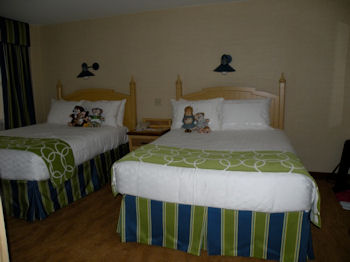 The beds in our suite.

There are so many positives to this resort that it is hard to include them all. The cartoon viewing area for the kids is in an enclosed room (Paradise Theater) with beach style chairs. I like this concept because the kids could sit down and “chill” in a quiet environment. At the other two resorts, the cartoon area is open in the lobby where it can be quite loud. There is an arcade (Flounder’s Fun ‘n’ Games) just down from the cartoon viewing room, so if you have kids in two different age groups, both can be satisfied at once. 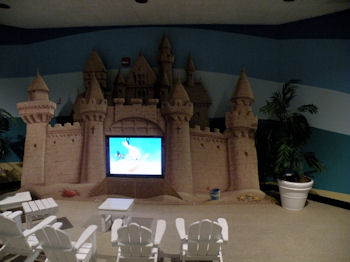 There is a well-stocked gift shop (Mickey in Paradise) and a lounge (Surfside Lounge) where you can get breakfast items, coffee drinks, cocktails, and lighter fare most of the day. Our favorite eating spot was the PCH Grill. In the morning, it hosts the Surf’s Up! with Mickey and Friends. I have to say that this character meal is my family’s absolute favorite character meal! Shhhh! Don’t tell anyone, though… We have consistently had the best character interaction at this meal. When we went this time, we saw Mickey, Minnie, Pluto, Daisy, and Stitch, and I have to say that the interaction between the characters was priceless, as well. 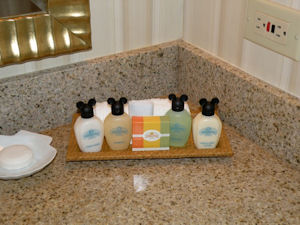 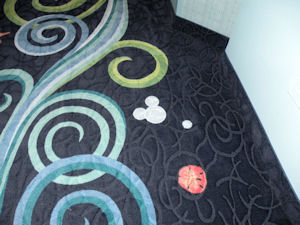 Attention to detail is apparent throughout the resort — from the toiletries to the hidden Mickeys in the carpet.

In the evening, PCH Grill has normal dinner fare with the absolute best Creamy Mushroom Bisque that I have ever eaten. We ate there twice, so I could get more soup. There is an exercise room, but I did not try it out. Keeping up with the kids was more exercise than I could handle, but I did look inside, and it appeared clean and bright. There is a laundry room, also.

There are a few negatives but not enough to overshadow the positives, in my opinion. I had read about the elevator issues before I left, so I was aware of the problems that some people have had on previous trips. Just to let you know, I usually travel in “off” season, so I can not attest to how these situations would be when the resort is crowded. Near the front desk in the lobby is a lone glass elevator. This is technically the concierge elevator. It is not key-access, so anyone can use it to go up; however, you can only call it from the concierge floors. Since we had been upgraded to a suite, we were not on a concierge floor, so we could not use it to go down. There are three elevators across from the glass elevator. These elevators are slow. We had to wait quite a while for elevators to go down, and in the morning, we usually had to wait longer because the elevators stopping were full. I think that this could be a major issue during the crowded times of the year.

Another problem is that the shower heads are very low. I am 5′ 6” on a good day, and the shower head was only about an inch above my head. My 5′ 7 1/2” daughter had to bend back to wash her hair.

The last negative is the pool size. There is only one pool, and the sign says that there is a 59 person limit. I personally think that is a small number, considering the size of the hotel. Like anything else, the hotel is a personal choice. 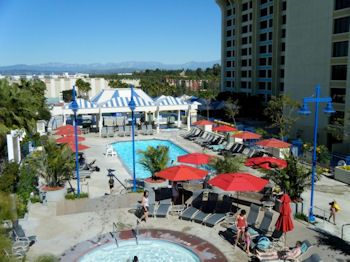 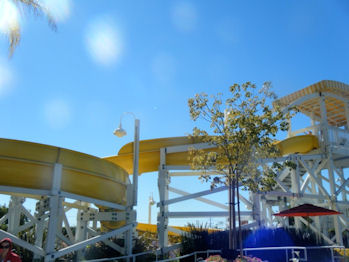 When I polled my kids about their favorite hotel and features, they replied that they preferred the Paradise Pier Hotel over the other two Disneyland resorts. Both children loved the water slide at the roof top pool complex. I liked that the slide ended in a chute of water and not a deep pool, so I didn’t have to be concerned about swimming capabilities or lack thereof. There was a lifeguard at the top of the slide and one at the bottom, but there was no lifeguard at the pool while we were there. 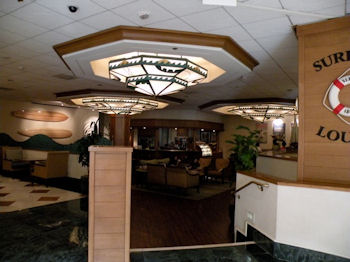 Concierge lounge — I have heard people debate the cost increase for concierge and whether or not it is worth the extra cost. For our family on this trip specifically, it was worth it. I took the kids by myself, and it was much easier to feed them breakfast in the lounge. Some nights, we would go get snacks to have in the room to eat while watching the World of Color. The other thing that makes the lounge a benefit is that they have small bottles of Desani water that can be taken back to the room. Between the bottles of water that we took to the room and the bottles that we took into the park from the lounge, we only bought two bottles of water in the parks during our seven day trip. I might have a tougher time justifying the extra cost of the concierge lounge at the other two resorts because there is a bigger difference in price related to standard room cost. In our case, we probably ate enough food and drank enough water, soda, and juice to break even. Keep in mind that the Paradise Pier Hotel lounge closes at 8:00 p.m. The other resorts’ lounges are open until 10:00 p.m. 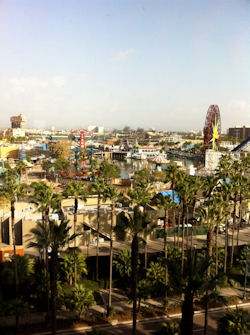 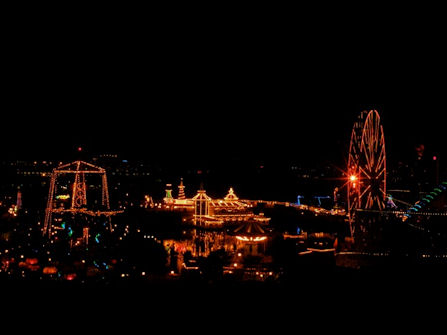 Day and night views of California Adventure from our room.

To summarize, my children have deemed the Paradise Pier Hotel as the best of the three Disneyland hotels. When asked why, my daughter said, “Because it has the coolest slide of all the hotels!” My son then chimed in that the slide was his reason, as well. I liked the lighter and brighter surroundings when compared to the darkness in the Grand Californian Hotel. I wonder, though, how the slide of the Paradise Pier Hotel will rank with my children after the Disneyland Hotel opens their new slide? 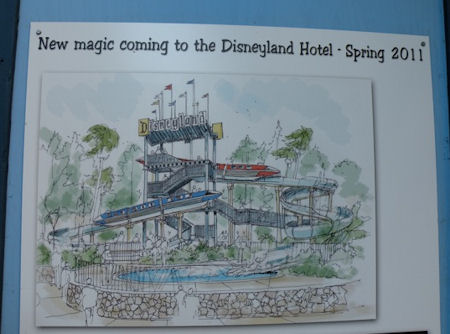 Maybe, we’ll have to try out the Disneyland Hotel again when its renovations are done for a slide comparison.