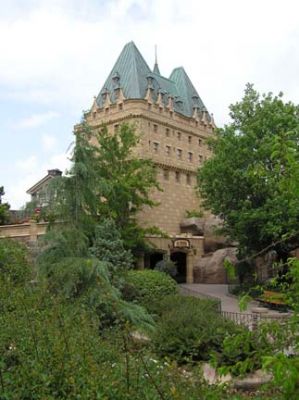 Our contributing writer, and resident Canadian, Teresa Pitman was on hand for the official opening of the new film at the Canadian pavilion at Epcot. She offers this report of the experience.

Even the weather cooperated. Friday, October 5 was a rainy, stormy day, but for about an hour early in the morning, the sun shone and the crowd gathered outside the Canadian pavilion to officially launch the new movie.

The day started with a lavish breakfast in the World Showplace – including bacon cooked on a chuck wagon grill, real Mounties (Royal Canadian Mounted Police) in their instantly recognizable uniforms, and entertainers from Cirque du Soleil (which originated in Montreal, Canada) – for the Canadian media and tourism representatives who were there to participate in this event. From there, the crowd walked over to the front of the Canada pavilion to enjoy a couple of songs by Off Kilter. A series of speakers, including Walt Disney World President Meg Crofton, Epcot Vice President Jim MacPhee, and Gisele Danis of the Canadian Tourism Commission, spoke about the friendship between Canada and the U.S. and the positive working relationships involved in creating this new film.

The previous film opened in 1982, and many Canadians felt a little embarrassed by it because of the emphasis on wilderness areas and wintry weather. Yes, we get snow. And yes, we have lots of beautiful landscapes. But the Canada that most Canadians know includes lively cities, diverse cultures, big-league sports, and a thriving entertainment industry.

As the speeches ended, Canadian Idol singer Eva Avila came to the stage and sang the movie’s theme song (she also sings it in the movie), while behind her a procession of people dressed to represent the various Canadian provinces and territories, each carrying a flag, descended the stairs. Many people in the audience were wiping away tears at this point. Those who weren’t already sniffling a little were certainly moved when a group of children, carrying Canadian flags, joined the provincial representatives and sang along with Eva. Then Mickey and Minnie joined the singer onstage as the song ended, and a burst of red paper maple leaves scattered over the crowd.

With everyone feeling a bit emotional, the crowd moved into the theater for the movie.

The Circle-Vision movie starts with a snowstorm, and a voice-over describing Canada as a country where it snows all the time and the people live in igloos scattered across the wilderness. Then comedian – and Canadian – Martin Short appears, announcing that he’s going to show us the real Canada that he knows and loves. The result is a movie that is both funny (Martin has a little trouble with calf-roping at the Calgary Stampede, for example!) and much more representative of Canada today. You’ll visit the Bay of Fundy on the Atlantic Ocean, where the difference between high and low tide is more than 50 feet; the big cities of Montreal, Toronto, Calgary, Vancouver, and Victoria; see the skaters on Ottawa’s Rideau Canal; and watch skiers in the Rocky Mountains. It ends with Martin encouraging everyone to come and visit Canada – “just exit by the big silver ball and head north.” The audience laughed and cheered, and at the end a cast mem ber led the group in singing the Canadian national anthem, which is also O Canada.

I think this new movie is something Canadians can feel proud about sharing with Epcot’s visitors – it clears up a few of the myths and showcases some of the best parts of our country. I look forward to seeing it again (and promise not to sing the national anthem next time…).