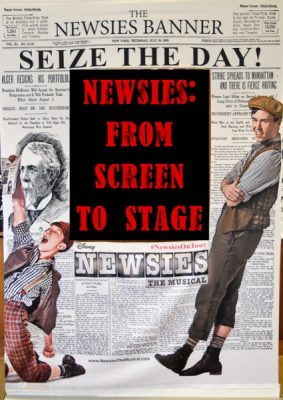 In 1899, the streets of New York City echoed with the voices of newsies, peddling the papers of Joseph Pulitzer, William Randolph Hearst, and other giants of the newspaper world. On every corner you saw them carrying the banner. Bringing you the news for a penny a pape. Poor orphans and runaways, the newsies were a ragged army without a leader, until one day all that changed.

So begins Newsies, the 1992 live action Disney musical starring Christian Bale and featuring music by Alan Menken. Which was a tremendous box office flop, but also spawned a successful Broadway musical 20 years later. This is that story.

Both the film and stage productions of Newsies are based on a real event – the newsboy’s strike of 1899. The core story from the Disney productions is true-  the New York papers increased their price from 50 to 60 cents per 100, and the ones specifically sticking to this were The Evening World and New York Evening Journal – the papers published by Joseph Pulitzer and William Randolph Hearst.

In true events, the demonstrations mainly took place on the Brooklyn Bridge, not only stopping New York circulation but that of most of New England. They Newsboys held several rallies, as depicted in Newsies, and also occasionally had tense and violent confrontations with men hired by Hearst and Pulitzer to break up demonstrations.

In real life, the strike was led by a charismatic leader known as “Kid Blink,” so called because he was blind in one eye. He is portrayed in the film Newsies by the actor Trey Parker (not the South Park guy) as a member of the ensemble.

The strike ended after two weeks when, like in the stage production, the publishers agreed to buy back unsold newspapers each day. 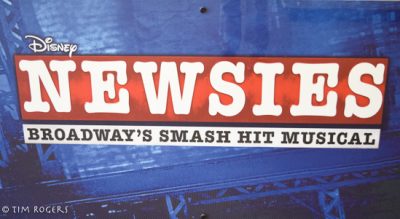 I grew up loving the movie Newsies. I think we might have been some of the few people who actually saw it in theaters, but I know my sister and I watched our VHS copy repeatedly and could recite nearly every song from memory.

In fact, because of this obsession, it never really occurred to me that others did not share our love of the film.  But since I have now learned that many people have never seen or even known of the existence of this movie, here are some of the high points.

The story follows Jack Kelly (Christian Bale) as he leads the newsboys in a strike, specifically against Joseph Pulitzer (Robert Duvall) after prices are raised 10 cents per 100 papers. Jack is helped by David (David Moscow) who, along with his brother Les, started selling papers to support their injured father. Along the way, Jack also meets and falls for David’s sister.

As the strike begins, the newsies situation is covered by New York Sun reporter, Bryan Denton (Bill Pullman), and they make front page news, before Pulitzer orders a press blackout on the strike. Also, the publicity helps the warden of the children’s prison (called “The Refuge”) find Jack, who had escaped from the refuge on Teddy Roosevelt’s car and is actually named Francis Sullivan.

Eventually, they catch Jack and try to turn him against the striking newsies to break him, but he can’t stay away. The newsies decide to print their own newspaper to spread the strike to all the working kids in New York, and that pressure, along with Teddy Roosevelt, helps to end the strike.

Not complicated at all.

As previously mentioned, this film flopped. Alan Menken has joked several times about how he won a series of Oscars and a Razzie in the middle, for Newsies (for “High Times, Hard Times,” which honestly is one of the weakest songs in the movie). However, it quickly gained a cult following, which continues to this day. 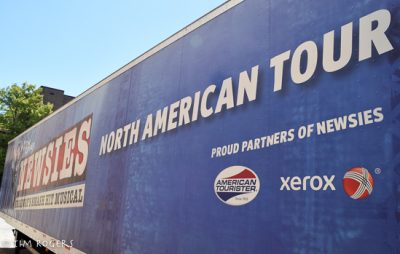 “We never thought of the movie as something meant for the stage,” Menken says. “But there was such a hunger for that to happen for a generation of kids because they loved it so much. We felt the need to turn it into a worthwhile meal.” (LA Times, March 13, 2015)

Looking at the productions that Disney Theatrical decided to pursue (Lion King, Beauty and the Beast, Mary Poppins, etc), there was a strong theme – they were popular and timeless. Newsies, does not quite fit into that mold.

However, and allegedly, one of the big drivers behind Newsies being produced as a stage production was that school and regional theatres were already putting on unofficial productions and Disney wanted to capitalize on the royalties.

In fact, the original idea for the stage show was to immediately release the rights for regional productions after the world premiere at the Paper Mill Playhouse, but the good reviews of the premiere caused them to bring it to Broadway instead. It played there for two years before going on tour, and that tour just ended October 2, 2016 after a final run in Austin (where I was lucky enough to see it).

The stage show varies from the movie in a few important ways. The team of original songwriters Alan Menken and Jack Feldman worked with Broadway legend Harvey Fierstein to rewrite some lyrics, shuffle the song order, and add some new songs. They also streamline and simplify the story. Plot-wise, the biggest change is that the newspaper reporter is now also Jack’s love interest and is also secretly Pulitzer’s daughter. This change combines several minor characters and adds some extra drama into the story (and also a humorous aside near the end). I will admit that when I first listened to the Broadway soundtrack (long before seeing the show) and heard this particular change, I was concerned with what they were doing, but seeing it in context I think it works. 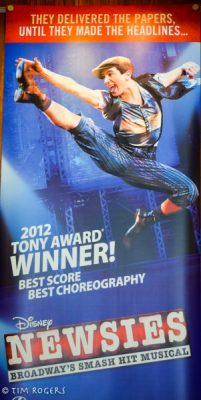 While on Broadway, Newsies won two Tony’s, for musical score and choreography, and rightly so. Probably the high point of seeing the stage production was the fantastic dancing of the news boys, with some extended dance breaks particularly in “Seize the Day” and “King of New York.” All in all, the stage production of Newsies is a fun show with good energy and catchy music – it’s popularity is well earned.

First, Disney is reuniting some members of the original cast (including the fabulous Jeremy Jordan as Jack Kelly) with some of the national tour company for a special performance of the show that will be broadcast into movie theaters around the country through Fathom Events. This broadcast is happening sometime in January, so watch the official Newsies page for updates and information. 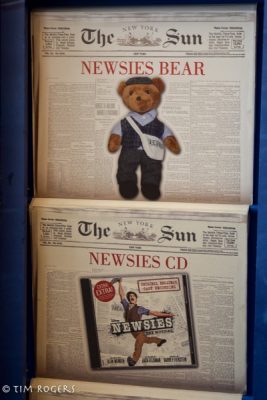 Check out your favorite Disney Outlet for a good chance at seeing leftover merchandise from the tour.

Other than that, the rights to Newsies are now being released for regional productions, as originally intended. As such, you will likely see productions of Newsies in a school, community theater, or local touring company near you in the very near future. 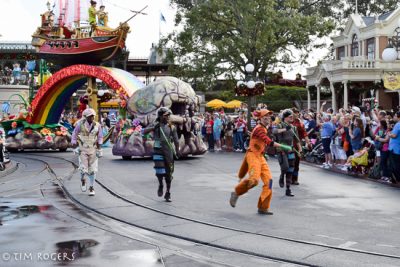 In the meantime, you can always check out the film, the Red Car Trolley News Boy show at Disneyland, or the Newsie-inspired Lost Boys in the Festival of Fantasy parade at the Magic Kingdom.

Whichever way you do it, go out, enjoy, and always seize the day.

Have you seen either Newsies on stage or on film? Share your thoughts in the comments.