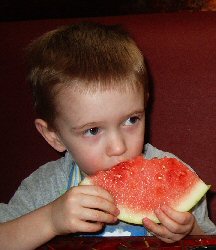 Five-year-old Sebastian gave the new healthier children’s menus at Walt Disney World “two thumbs up” during our December 2006 trip. His parents did, too, because they remembered the tears and frustration of  our 2005 trip when the kid’s menus consisted mostly of things he didn’t eat (like chicken nuggets and macaroni and cheese) – and the things he was willing to consume (like fries) weren’t very healthy.

The new menus, announced in the fall, are part of a long-term plan to give Disney guests more options. Joel Schaefer, who is the Culinary Development and Special Dietary Needs Manager at Walt Disney World says that the new menus were under development for about two years, and involved consultation with a dietician, the Disney chefs and, most importantly, kids themselves.

“We did lots of testing with kids, presenting them with some food options and finding out what they liked to eat,” he explains. “I remember one little girl who was trying the steak who said ‘I have little teeth, I can’t chew that steak.’ It helped us understand why foods like hamburgers are so popular with children – it’s because a hamburger is easy to eat.”

Schaefer says the goal was to offer more choices, but also to provide more balanced meals that would include one serving from each of the food groups.

The new menus are available at some counter service and some table service restaurants, and offer both “complete meals” and a “kid’s picks” sections. The complete meals include a main dish with a side dish and a dessert, served in a three-compartment plate shaped like – you guessed it – a Mickey Mouse head. Complete meals include one serving from each of the five food groups. “Kid’s picks” allow the child to choose from two of three “sides” (most often carrots, grapes or applesauce) or an appetizer at table service restaurants, then one choice from a short list of entrees (choices are different at each restaurant, but may include vegetable stir-fry, cheeseburger, chicken strips, turkey wraps, etc.) and a drink. Desserts available included yogurt and fruit, apples with brown sugar, ice cream, sugar-free jello, and carrot cake. 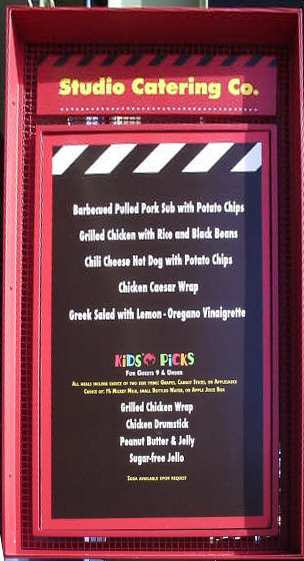 Another improvement: the drinks available with the kid’s meals included water, juice and milk. Sebastian especially liked having his own kid-sized bottle of water.

Some restaurants also have “specialty dishes.” As Schaefer says: “When you have a themed restaurant, the kid’s meals also should reflect the theme, because Disney is all about the story. So we will always have meatloaf for kids at the 50’s Prime Time Café.

Schaefer also pointed out that the French fries and soft drinks that were mainstays of past menus are still available if requested.  “We’re finding, though, that people are more often ordering the items with the healthier sides – carrots, grapes, applesauce – and picking water, juice or milk to drink,” he says.

Here are some of the “complete meals” from the newer menus that Sebastian especially enjoyed:

At the 50’s Prime Time Café: chicken on pasta with tomato sauce and mozzarella cheese, with green beans and a fruit salad.

At Sassagoula Floatworks and Food Factory (POFQ food court):  a grilled cheese sandwich with carrots as a side dish and grapes for dessert. 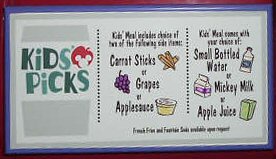 Some of the “kid’s picks” he especially liked:

At Sunshine Seasons: a “put it together yourself” sandwich with turkey and grated cheese, with carrots for a side dish and some (very yummy) watermelon for dessert.

At Marrakesh: Morroccan pasta (the mildly spicy tomato sauce was definitely one of his favourites) with ice cream for dessert

The side dishes and desserts are often packaged, so if they weren’t finished during the meal we could just tuck them in a backpack for a snack later or to be eaten while waiting in line for a ride. Some places (such as Sassagoula) also allowed us to substitute a whole fruit (such as an apple or orange) for the grapes or applesauce that came with the meal.

In fact, we found that the Cast Members were generally very flexible about substitutions, as Joel Schaefer had mentioned. I did, on one occasion, overhear a parent at a counter service restaurant being told that she could not substitute French fries for the carrot sticks included with her child’s meal. However, it is noted on at least some table service menus that French fries or soft drinks could be substituted if requested and I saw many other cases where the substitutions were made without hesitation.

A couple of times we asked if we could have carrots or grapes instead of fries with our adult meals, and were told “certainly.” So having these sides available can be helpful to adults looking for healthier options, too.

Schaefer promises that WDW guests can expect both the children’s and regular menus to continue to evolve. “We know that the food is an important component of your visit,” he says, “and we keep trying to make it better.” 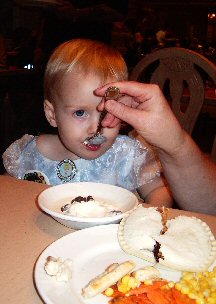