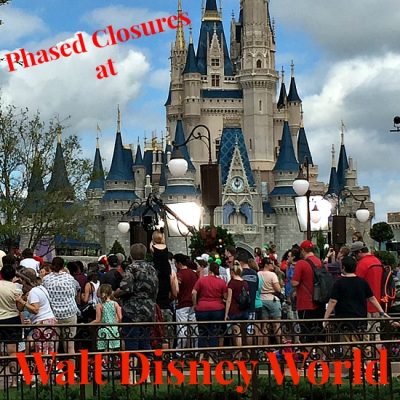 Each of the Walt Disney World parks has its own capacity level (meaning the number of people the park can handle at one time).  Occasionally the parks reach that number and Disney has to restrict the number of guests entering the parks.  Or they might close the parks to entering guests completely!  But, never fear!  These closures don’t happen often and, when they do occur, the parks don’t just close all at one time.  If you’re visiting Walt Disney World at a popular time of year, it is important to learn about phased closures.

Phase 1 closures are, as you would expect, the first “step” of closures on particularly busy days.  During a phase 1 closure, guests who are entering the parking lots with one-day single-park tickets, cast member passes or guests who had planned on buying tickets at the gate will be turned away.  Most guests will still be admitted during this type of closure, including guests staying at an on-site resort, guests returning to the park or hopping from a different park, Annual Passholders, those who have reservations in the park that day, etc.

A bit more restrictive than Phase 1 closures, Phase 2 closures are a bit more common.  During this phase the only guests who will be admitted to the park are Annual Passholders, those staying at an on-site Disney resort, those re-entering the park after visiting earlier in the day or hopping from another park, those arriving on Disney transportation or guests who have in-park reservations for the day.

Phase 3 closures are, usually, the most restrictive you will see at Walt Disney World.  During this phase, the only guests that will be admitted to the park are those who are staying at an on-site Disney resort, Annual Passholders and those with in-park reservations that day.

Although very rare, Phase 4 closures are a possibility.  During this phase the park is closed to all arriving guests.  The parking lots are closed completely and no additional guests are admitted through the turnstiles until the closure is lifted.

How Often Do Closures Occur?

The vast majority of guests visiting Walt Disney World will never experience a closure of any sort during their vacations.  Historically, there are very few times of the year when these types of closures take place – below are some quick facts about the frequency of closures in the past.

Have you experienced the park when it saw phased closings? What were your experiences? Share in the comments!