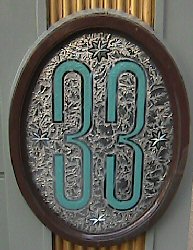 I’ve been obsessed with the idea of getting into Club 33 ever since I heard about it, when I was about ten years old. While my parents browsed in New Orleans Square’s shops, I’d linger by the nondescript entrance door, hoping to get a peek inside the lobby. When I was older, I scoured the web, reading every personal story and studying any photos I could find from those lucky few who had made it into the club.

We decided to meet up one afternoon of a MouseAdventure weekend (MouseAdventure is a scavenger hunt-style game put on by MousePlanet). Brian and Kari (the relatives) and Brad and I were competing in different formats of MouseAdventure, and our division’s race would start Saturday night. Our Club 33 reservations were for early afternoon. I was bursting with joy all day—how much better could a day at Disneyland get?

Although we knew that many people eat at the club in their usual Disneyland-casual wear, Brad and I decided to dress up. This was Walt’s special place, and I was not going to show up looking like I just got off of Splash Mountain. As we walked toward New Orleans Square on a hot autumn afternoon, in our unusually nice clothes, I felt every change in pavement through my heels, from bricks to cobblestones, and tried to look dignified as we paraded down Main Street. When I was young, I’d seen so many adults wearing “dress-up clothes,” and I just knew they were going to Club 33. Now I was one of them! I was practically bouncing down the street. I could have run the half-marathon in those heels.

We finally got to the bustling corner of New Orleans Square, met Brian and Kari, and giggled to ourselves while we waited for our reservation time to approach. I have to admit, some of the mystery that had built up was drained a bit as we watched the door held wide open while an enormous party filed out. At least fifteen people must have traipsed out of the “secret” club. For years I’d hung around, hoping for a quick glance inside, and now that I was about to enter, the door was swung open for ages. A few minutes later, just before we approached the (now closed) door, we saw some people taking pictures next to the “33” plaque, which renewed our feelings of giddy exclusivity.

Our smugness was again dashed back down to a reasonable level when the menfolk couldn’t figure out how to work the intercom/buzzer to let us in, which Kari and I found pretty hilarious. After finally stumbling into the lobby, I couldn’t stop grinning. Just the four of us seemed to fill the dark and tiny room, and we all managed to pile into the antique lift to be brought into the club in style. 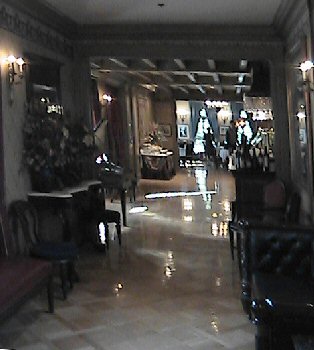 Hallway heading toward our dining room. That’s a shiny floor!

I admired the spacious rooms above, but zeroed in on the merchandise case. I’d been given various Club 33 memorabilia, bought off of eBay, and now that I was in the place itself, it was time to buy myself some presents. But first, we had to actually eat. 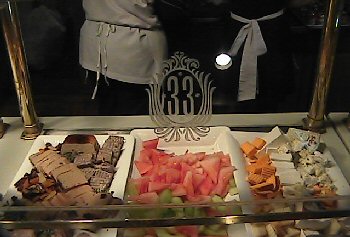 Cheese and fruit looks better with a Club 33 logo over it. 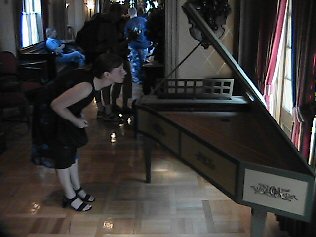 I’m studying the painting on the harpsicord from afar. I felt like I was in a museum.

It was lunchtime, so we strolled past a buffet on the way to our table, near a window overlooking New Orleans Square’s crowded streets below. We exclaimed over our surroundings—”We’re up here! Look at this plate! Look at those paintings! There’s the piano!” Fortunately, our waiter pretended not to notice us taking photos of the place settings and even told us about the history of the rooms and pointed us in the direction of the Trophy Room to examine later. 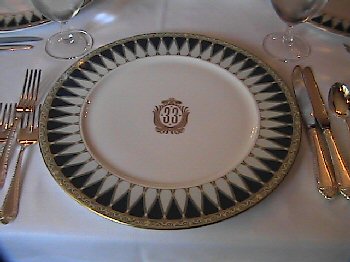 I wish we could have registered for these place settings.

I still think our waiter was psychic. After looking over the menu, I found one dish that sounded great, but I wasn’t actually sure what it was, and I wanted to make sure I could eat it as a vegetarian. I got as far as saying, “I wanted to ask about the pasta…” when the waiter told me all the ingredients and guaranteed that vegetarians love it. My psychic-waiter theory was later confirmed when I whispered to Brad that I liked the waiter’s pen with the club’s logo on it, and minutes later, he left it on the table for us. I began to wonder if the microphones that Walt had wanted installed in the Trophy Room ever secretly made it into our dining room. 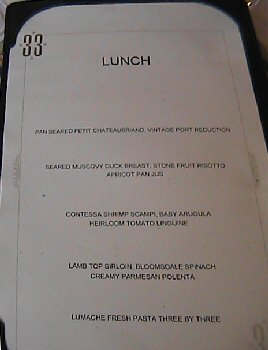 Our choices for the main course. 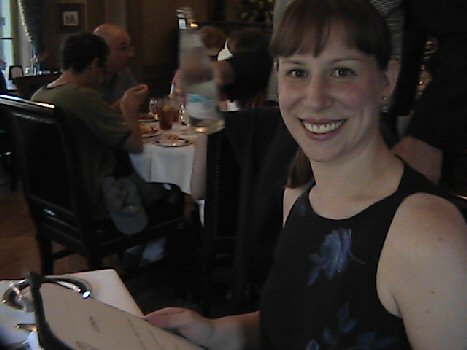 I don’t know what it is, but it sure sounds good!

We had a pass at the scrumptious buffet before our main course came, but I was way too giddy to eat much. My cousin and I both ordered tequila drinks, and we all took turns taking photos of each other after the waiter gave us the OK. I found my appetite when my assortment of four different pastas arrived, though, and everyone else dug into their steaks, which I was assured were perfectly cooked. Most of our conversation consisted of us all saying, “I can’t believe we’re here!” (or “I can’t believe I’m drinking tequila in Disneyland!”) between bites. 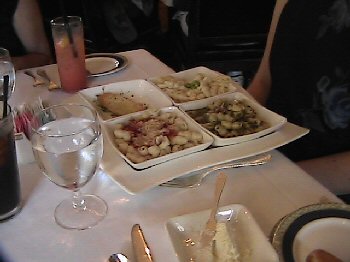 Despite completely stuffing ourselves at lunch, we all managed to make a significant impact at the dessert buffet. I can still almost taste a certain tangy, chocolate-raspberry pudding-type dessert. Even the richest chocolate tastes even better when you’re sitting in a sun-filled room at Club 33, watching the tourists run around on the streets below. 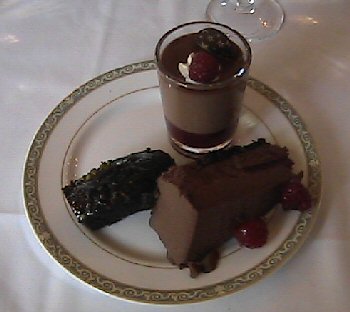 Yes, there were non-chocolate desserts, but what’s the point of that?

What with the drinks, huge amount of pasta, and three desserts, combined with my constant excitement, I can’t believe I wasn’t sick. But being ill in Club 33 was definitely not dignified. After all the photos and the dessert bar, I had to preserve whatever decorum might be left. 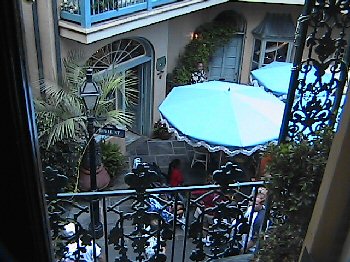 View from the dining room.

But, of course, any remaining tact went out the window (literally) when we realized that since we were already seated next to an exit onto the balcony, it wouldn’t inconvenience anyone if we slipped outside. We asked our psychic waiter, who told us yes immediately, and all shuffled out the door, feeling regal from our spot on the balcony, gazing at all the rest of Disneyland. While we were on the balcony, a little girl saw me, and I waved at her. I felt like a queen, only not one of the wicked ones. 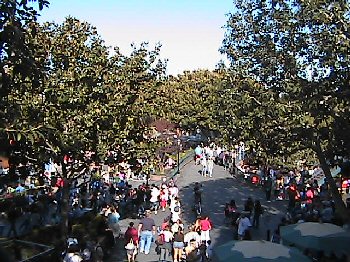 People watching from above. 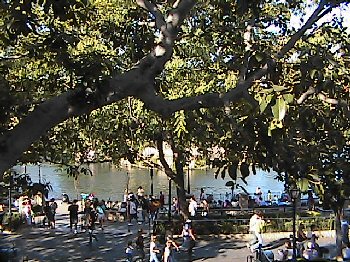 View of the Rivers of America, from our private balcony. 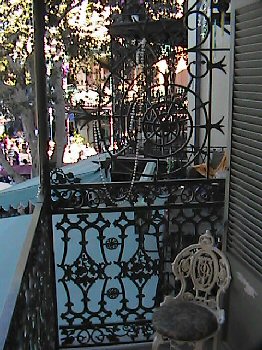 The tiny chair on the balcony reminded me that our being up there was probably ruining the forced-perspective building trick, but it was too much fun to worry about that.

After dawdling outside, gazing at the most coveted views in Disneyland, we all asked about merchandise and made our purchases. Then, the finale: A visit to the Holy Grail of Disneyland restrooms. By that point, with our time in the club coming to a close, I threw aside all thoughts of etiquette and shamelessly took pictures of the toilet. It looks like a throne, really! With golden toilet paper holders! After lightening the stack of Club 33-embossed paper towels, Kari and I rejoined the guys, and we all said goodbye to the club and our regal afternoon. 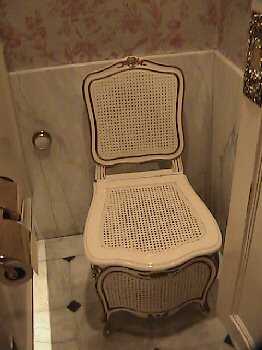 Brad and I headed back to the hotel to change into our MouseAdventure outfits for that evening, and Brian and Kari set off to find where their son and Brian’s mom had gone off to. Brad and I strolled through the busy streets, completely stuffed, content, clutching our souvenirs, and ready for an evening at our favorite place in the world, while still marveling at our good fortune of being able to fulfill a huge Disneyland dream. Of course, you don’t have to go to an exclusive club to have treasured memories of Disneyland. But if you can go, getting a precious afternoon in Walt’s private club makes for an especially unique memory to add to the hundreds of other happy ones from Disneyland. (And now I even have my own souvenirs to show for it.)

Incidentally, we performed miserably at MouseAdventure that night. We blame it on being too full from lunch at Club 33, which, I think, is not at all a bad excuse. 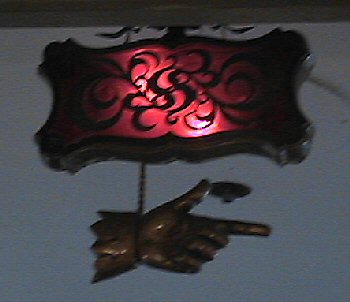 Sign pointing the way to the club’s exit out into Disneyland. Not such a harsh “reality” to have to go back to.