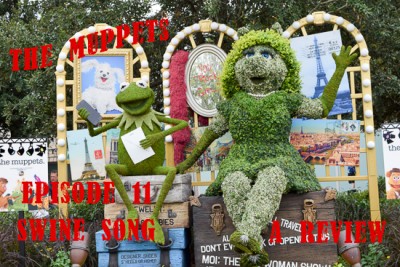 After their hiatus, the Muppets return at a brand new time (8:30 eastern/7:30 central). This episode begins with Miss Piggy returning from a great trip to Argentina (where she also smuggled a baby penguin back with her) and a network executive coming with a “branding expert” to work on the show.

His name is Pizza (pronounced pa che) and he is supposed to “update” the talk show because it is too “talky.” Kermit brings in Key and Peele since they had worked with him before, but their advice scares Piggy into doing whatever Pizza says.

While meeting to figure out how to update the show, all of the Muppets suddenly break into an impromptu a cappella jam on the Muppet Show theme.

Kermit thinks that the way to update the show is to incorporate more of the other Muppets into it. The show includes a segment with Pepe as an Uber driver, Bobo reading lines from the “Real Housewives of Atlanta,” and was supposed to include an interview with Key and Peele, but Pizza sabotaged them, causing Piggy and Kermit to need to sing an old duet to fill the time. However, seeing them sing together caused Denise to ask for a break from Kermit.

As far as a review goes, Key and Peele had a great cameo in this episode. Both of them have great comedic timing, are fun and silly, and really seemed to embrace the show. Those kind of guest stars are the best. Additionally, Uncle Deadly remains a new favorite for me and I am glad he is still given such a prominent support role on this show.

From the end of this episode, it seems like incorporating the other Muppets in a performance capacity on Miss Piggy’s show will not be a one time thing. As such, it seems like this will be a new direction for the show as a whole, and I think that will be a positive. It gives more of an opportunity to do silly things and to utilize all of the Muppets in a multitude of ways. That could really fill in some of the gaps the show has had thus far, and make it stronger for the long run.

If this is really a tweak in direction for the show and will last, I think it’s a great decision and can’t wait to see what they do next.

Miss Piggy, speaking of the penguin she stole: “His name is Gloria Estefan. It was the only Spanish name I could think of in the momento.”

Peele: “Now he and I share a one bedroom and sell oven mitts on Etsy.”

What were your thoughts of this week’s episode of The Muppets?