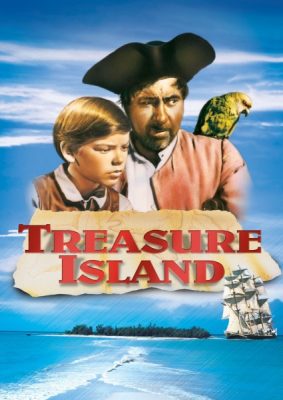 Based on Robert Louis Stevenson’s 1883 novel of the same name, Disney’s Treasure Island was theatrically released on July 29, 1950. The ninety-six minute film, shot in London, was the first completely live-action movie in Disney history. (1)

The year is 1765, and a monetary adventure is afoot. No, we are not congregating in New York City to protest the Stamp Act; rather, we are on the west coast of England preparing to embark on a voyage to Treasure Island, where 100,000 pounds of gold has been hidden by the late pirate Captain Flint. The treasure, long known to be in existence, is now available for the taking because the dying pirate Billy Bones (Finlay Currie) gave his map to young Jim Hawkins (Bobby Driscoll), the son of the owner of the Benbow Inn, for safekeeping against a horde of rival pirates. Hawkins’s possession of the map convinces a rash local official, Squire Trelawney (Walter Fitzgerald), and Bones’s hesitant physician, Dr. Livesy (Denis O’Dea), to organize a voyage on the vessel of Captain Smollett (Basil Sydney). Hawkins joins the duo and develops a close relationship with the ship’s charismatic cook, Long John Silver (Robert Newton), who exudes a genuine fondness for the boy. Unfortunately for Trelawney, Livesy, and Smollett, Silver is actually a cunning pirate, and, before long, a planned mutiny transpires, where Silver kidnaps Hawkins for leverage. Trelawney, Livesy, and Smollett are now seemingly forced into a zero-sum game: they can either have the treasure or the boy. How will this saga conclude?

New York Times film critic T.M.P. afforded Treasure Island a laudatory review, praising every aspect of the effort. T.M.P. said, “The greatest pirate adventure story of ‘em all, Robert Louis Stevenson’s ‘Treasure Island,’ emerged yesterday on the screen of the Mayfair Theater as a grand and glorious entertainment. Six or 60, the spectator is bound to be caught up in the magic of this thrilling quest for fabulous wealth. Under the production auspices of Walt Disney, the picture was produced in England with an English cast that is downright perfect to the lowliest of Long John Silver’s cutthroat crew. Only Bobby Driscoll, who plays the youthful Jim Hawkins, was imported from Hollywood, and his casting was sheer inspiration.

Although ‘Treasure Island’ was filmed twice as a silent movie and once as a talkie, Mr. Stevenson’s classic never really sprung to full cinematic life until Mr. Disney waved his magic wand. Photographed in gorgeous Technicolor, the latest remake captures the true spirit of the novel. It is a tingling, suspenseful diversion which expresses in eloquent pictorial terms all of the suppressed craving for adventure that sometimes prompts little boys to wander off into the wooded pathways of life and sets the rest of us to daydreaming about excitements which are denied fulfillment by the inhibitions of advancing age.

‘Treasure Island’ is simply fascinating. From the moment Black Dog thunders into the Admiral Benbow Inn on the rugged, lonely west coast of England and traps the manly, little Jim Hawkins in a lie concerning the whereabouts of Captain Billy Bones and his prized map of Captain Flint’s pirate treasure, the screen throbs with the exhilaration and chilling fear that are the experiences of Jim Hawkins as the wily, peg-legged Long John Silver leads the crew of the Hispaniola to mutiny against the good Captain Smollett and its owner, Squire Trelawney.

Byron Haskin has directed ‘Treasure Island’ to bring out all the action inherent in the story. The scenes aboard the majestic square-rigger as it plows across the Atlantic from Bristol have all the menacing foreboding of gathering storm clouds, and the showdown on the island between the captives and the pirates crackles and sparkles to the sound of musketry and flying cutlasses. Pity the heart that is so worn and tired that it will not respond to the timeless fascination of ‘Treasure Island.’” (1) 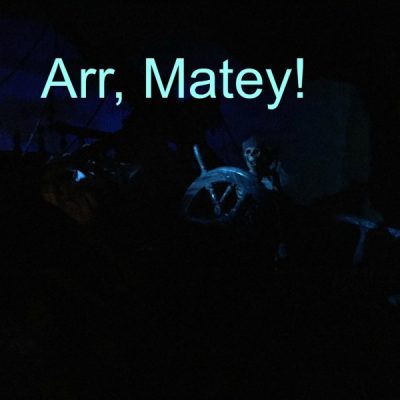 From the Alice Comedies of the 1920s to the package films, such as Saludos Amigos (1942) and The Three Caballeros (1944), of the 1940s, Walt Disney had created numerous live action productions prior to Treasure Island. These efforts, however, had all amalgamated live action segments with Disney’s legendary animation. Treasure Island was, thus, the first completely live-action film in a long line of non-animated Disney movies that lasts to the present day.

Years after Treasure Island’s release, Dave Smith, chief archivist emeritus of the Walt Disney Archives, reminisced on the career of Bobby Driscoll, who portrayed Jim Hawkins in Treasure Island. Said Smith in response to a fan’s question: “Bobby Driscoll starred in Song of the South [1946], Melody Time [1948], So Dear to My Heart [1948], and Treasure Island for Disney; he also provided the voices of Peter Pan and Goofy Jr. in 1950s cartoons. Besides his films for Disney, Bobby appeared in a number of features and television shows for other producers. He received a special juvenile Academy Award in the year he made So Dear to My Heart and the non-Disney film The Window. He appeared in the television specials One Hour in Wonderland and The Walt Disney Christmas Show. He had a troubled life after he outgrew children’s roles and died a pauper, of a drug overdose, at age thirty-one in New York City. Bobby was a favorite actor of mine, too, as I was growing up, since we were about the same age, and I knew his mother when I worked at the UCLA Library in the 1960s (she worked there, too).” (3)

Treasure Island is the oldest Disney film to have received a “PG” rating, albeit retroactively, when the film was released on VHS. (4) In addition to pirate battles, the film incorporates smoking and alcohol consumption.

Squire Trelawney should have probably conducted some research in selecting the crew for Captain Smollett’s vessel rather than trusting the search to his chosen cook, Long John Silver. Silver may make a good ham and buttered eggs platter, but culinary skills are kind of irrelevant to ship safety. To Trelawney’s credit, however, he freely admits that he made a huge mistake to Smollett upon learning of Silver’s plan to foment a mutiny.

The most trustworthy character in the film is undoubtedly Jim Hawkins. When Hawkins tells an elder that he will do something, such as stopping Billy Bones from drinking whiskey, remaining “friends” with Long John Silver for purposes of espionage, and defending Long John Silver after Silver saved Hawkins’s life, the lad tries to the best of his abilities to follow through on his promises.

If Walt Disney was attempting to portray Hawkins as a child with unimpeachable character, Hawkins’s decision to defend Silver also says something about the pirate, namely that Silver maintains some goodness in his soul. If Silver was a pure scoundrel, Hawkins would have been more likely to abandon the pirate.

The final line of the film, spoken by Dr. Livesy as Long John Silver sails away in a rowboat, well sums up general feelings towards the pirate: “I can almost find it in my heart to hope he makes it.” Long John Silver is bad, but there is nonetheless something likeable about him.

Did Hawkins’s mother protest much before allowing Jim to embark on the voyage? Even under ideal circumstances, the adventure seems perilous.

Incidentally, Ms. Hawkins is the only woman mentioned in the film. No female character actually appears on screen during Treasure Island.

No original lyrical numbers are included in Treasure Island. Suspenseful background music, however, augments the action throughout the film.

The quirky personalities of Trelawney and Ben Gunn (Geoffrey Wilkinson), the latter a marooned crewman of Captain Flint on Treasure Island, are amusing, but you are unlikely to laugh hysterically during Treasure Island.

At the Magic Kingdom, children can receive pirate or mermaid makeovers at “Pirate’s League.” Reservations are highly recommended for this extra-cost experience.

Delving into a new format for the first time, Disney struck gold with Treasure Island. The effort is well paced, engaging, and fun.

What do you think of Treasure Island? Let me know in the comments!

Sponsored Ad:  Would you like to help support The Mouse For Less website in continuing their mission of being THE Disney vacation planning resource?  You can do so by purchasing Treasure Island from our Affiliate Link through Amazon. Thanks so much for your support!