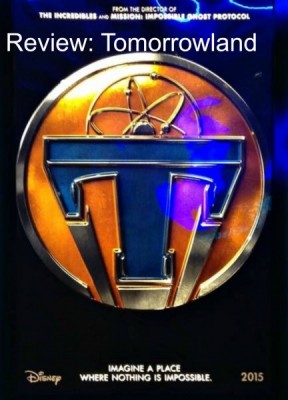 Disney has had a mixed track record of films based on their theme park attractions. I think we can all agree that Pirates of the Caribbean was a hit, and although not everyone agreed, some people enjoyed The Haunted Mansion. But if you can find anyone who enjoyed The Country Bears, let me know. For a while I was worried that we’d be subjected to “The Tram Ride from The Parking Lot: The Motion Picture.”

However, how would Disney make a film based, not on an attraction, but a complete land inside many of their parks? I was intrigued when the trailers for Tomorrowland were released, especially when I learned that Brad Bird, who gave us my favorite Pixar film (The Incredibles) directed it, and that Damon Lindelof (“Lost”) wrote the screenplay. I had a feeling that with Bird and Lindelof behind the project, we’d get an intelligent, fun, exhilarating film.

This is the story of Casey (Britt Robertson), an idealistic teenager trying to make sense of a pessimistic world. When she attempts to stop the dismantling of a shuttle launch platform, she finds herself in jail. When she is released, she finds among her possessions a pin, which transports her to a futuristic city whenever she touches it.

Her quest–to discover the meaning of this pin leads her first to Athena (Raffey Cassidy), a young girl who is not what she seems, and Frank Walker (George Clooney, in absolutely perfect form), a hardened, disappointed man who has lost the optimism of his youth.  To say anything else about this film would be to ruin several wonderful surprises, so that’s it from me for the plot summary.

I’ll cut to the chase: I absolutely loved this film. It is not perfect; I found that the pacing towards the end of the film slowed considerably. Also, the message of the film, albeit an important one, was bashed over my head with a mallet in the last 17 minutes or so. I felt like yelling, “YEAH, OKAY, I GOT IT!” at the screen.

This film is a celebration of innovation, invention, optimism, and idealism. It’s a critique (perhaps too heavy handedly so) of today’s pessimistic society, where irony and sarcasm dominate any conversation about how to fix what is wrong with the world. Walt Disney would love this film. George Orwell would roll his eyes and leave the theater.

The PG rating is based mostly on action and fight sequences. Parents of young children should note that while there are some violent scenes, there is no blood or guts. Most of the injuries that are inflicted happen to robots, so you’ll see a lot of exposed circuitry, but nothing that would turn anyone’s stomach.

The effects are masterful, both when you see Tomorrowland in all its glory and when Frank reminisces about visiting the 1964 World’s Fair in New York City. There are Disney touches throughout, both subtle (referring to a secret society as Plus Ultra) and not so subtle (you’ll hear There’s a Great Big, Beautiful Tomorrow and see it’s a small world).

As with so many “idea” films, this one suffered from the marketing campaign. How do you market a movie that’s so hard to pin down? It’s not really a sci-fi. (The majority of the film takes place OUTSIDE of Tomorrowland.) It’s not really a kids’ movie, although kids will certainly enjoy it. It’s not really an action film, although there is a lot of action. It reminds me of an old fashioned Disney live action FAMILY movie. And that’s something that’s been in short supply lately. Most summer films fall into one of two categories: 1) a kiddie film that parents will squirm through and wish was over and 2) an adult film that means Mom and Dad left the kids home with a sitter. This is neither, and perhaps that’s it’s greatest triumph.

Perhaps the reason this film has not been as well received as hoped is because the film is right: our society has become far too pessimistic. Maybe film goers don’t want to see a film about hope and progress, about ideas and vision, about youth changing this world for the better.

But movie goers who go into this film with an open mind, who are ready to ask “what if” and take a leap of faith that yes, things CAN get better and not worse, will be rewarded by a wonderful film that celebrates the best and the brightest in all of us.

Did you see Tomorrowland yet? What are your thoughts of the film?