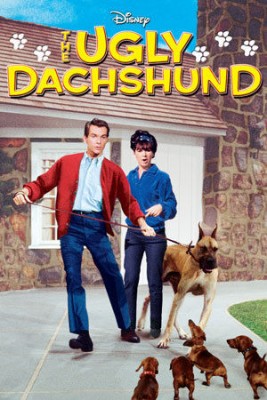 A live action comedy based on Gladys Bronwyn Stern’s 1938 novel of the same name, The Ugly Dachshund was theatrically released on February 16, 1966. The 93-minute film was accompanied by the short “Winnie the Pooh and the Honey Tree,” which was re-utilized as the first of four segments in the animated feature The Many Adventures of Winnie the Pooh (1977).

Early in the morning, Mr. Mark Garrison (Dean Jones), an artist, rushes his wife, Fran Garrison (Suzanne Pleshette), to the hospital for a special delivery. A police officer, Carmody (Kelly Thordsen), is set to ticket Mr. Garrison for speeding when he realizes the situation and graciously provides an escort.

Actually, Carmody does not comprehend the situation—the Garrisons are not bound for the maternity ward but for the animal hospital, where the family Dachshund, Danke, bears three female puppies: Wilhelmina, Heidi, and Chloe.

Upon returning to the animal hospital to retrieve the dachshunds, Mr. Garrison is asked for a favor. The veterinarian, Dr. Pruitt (Charlie Ruggles), wonders if Danke can nurse, in addition to her kin, a newborn male Great Dane, the runt of the litter, until he is weaned. Opposed to the idea initially, Mr. Garrison agrees, and he soon comes to love this Dane, Brutus, in a situation that evolves into a competition with Mrs. Garrison and her dachshunds. The dachshunds frequently instigate chaos, yet Brutus receives all the blame.

Mr. Garrison is perturbed, and when his wife enters Chloe into a dog show, Mark covertly agrees to work with Dr. Pruitt to train Brutus for the show’s Great Dane category. Unfortunately, having grown up among dachshunds, Brutus thinks he is a dachshund. With the show only days away, the men face a seemingly impossible task. Can Brutus, the underdog, possibly have his day and become best in show?

The plot of The Ugly Dachshund is weak and predictable, but the plights of Mr. Garrison and Brutus afford enough structure to make the story passable.

New York Times columnist Howard Thompson offered a mixed review of The Ugly Dachshund, deeming the concept “cute” but over-saturated with canines. On the latter point, Thompson said, “To one viewer, at least, a dog is a dog. And there is something distinctly off key, even unhealthy, about a young couple whose every waking minute revolves around a bark or a tail-wag. If ever a Disney picture—and a marriage—needed children, it’s this one.” (1)

Thompson was more enthusiastic about the Winnie the Pooh short, saying, “Three cheers for “Winnie the Pooh”! “The Ugly Dachshund”? He’ll do.” (2)

Joseph Gelmis was more enthusiastic about the main feature in his Newsday review, deeming the flick good family fun. On Disney comedies in general and The Ugly Dachshund in particular, Gelmis said, “Walt Disney deals in the obvious—and makes it pay. He rains cats and dogs and monkeys down on his audiences, and there are never any whimpers from actors or the public. He tells a little story, not enough to slow up the cute action shots of the animals at play, and he plays it all for family laughs.” (3)

On her new venture, Pleshette jokingly said, “I told Mr. [Walt] Disney he spent 40 years establishing an image, and that I might wreck it in three weeks.” (5)

More seriously, she continued, “My parts for Disney show how perceptive he is. He sees things in people that other producers overlook. For Disney this is the first film with real sex appeal. It’s all very proper, of course, but there are some hugging and kissing sequences.” (6)

Overall, I think Charlie Ruggles offers the best effort in genuinely portraying the kind elderly Dr. Pruitt, and Dick Wessel is solid in a limited role as Eddie the garbage man. Dean Jones overacts moments of agitation, but the exaggeration is amusing.

The Ugly Dachshund lacks a true villain, but Mrs. Garrison is one of the most annoying characters in any Disney movie. She grates on the viewer’s nerves by bombastically blaming her husband and Brutus for disasters that are really the fault of herself and her dachshunds. This irritation peaks during a vitriolic rant in the aftermath of a debacle in Mr. Garrison’s art studio.

Beneath the rancor, Mrs. Garrison is actually a loving wife. She just gets carried away with her dogs sometimes, which is most of the time in the movie.

Background music is utilized throughout the film to complement the varying moods. Somber, soothing tunes dominate during serious interactions between Mr. and Mrs. Garrison, while swift, whimsical melodies are featured during chaotic moments involving the dogs.

To dissect one scene late in the film, the music commences on a triumphant note with Mr. Garrison trying to persuade Brutus of his true identity as a Great Dane, before gaining a whimsical air as Brutus does not understand Mr. Garrison’s point. The segment then culminates in a beautiful melody as the Garrisons hug.

Cats and dogs are rarely amiable, but Brutus is a figurative exception to this rule. He is mistaken for a lion, even though he is a canine, not a feline, and he helps protect the neighborhood from cat burglars!

The Ugly Dachshund provides consistent laughs, though it is rarely hysterically funny. Coupled with the characterization, the humor is fulfilling.

Danka, Wilhelmina, Heidi, and Chloe buy Mr. Garrison birthday presents. These gifts do not seem to impress him, and I cannot really blame him. The dogs adorn cute party hats, though!

Mr. Garrison goes from exalting Brutus to scolding him almost instantaneously. In general, Mr. Garrison is at his funniest when angry.

The dachshunds, with help from Brutus, wreak havoc in the living room, in Mr. Garrison’s studio, and at an outdoor party. The latter scene is especially funny, though politically incorrect, with people aimlessly scrambling and running into tables, each other, and seemingly-scrumptious desserts. That cake looks good!

One of the names Mrs. Garrison ponders for a puppy, “Esmeralda,” was the name of the female protagonist in The Hunchback of Notre Dame (1996).

One of the dachshunds is an adequate pianist. Like Berlioz and Marie from The Aristocats (1970), she seems to know both her scales and her arpeggios.

No attractions or character meets pertaining to The Ugly Dachshund are featured at Disney’s theme parks.

A dark ride themed after Winnie the Pooh, “The Many Adventures of Winnie the Pooh,” is featured at both Walt Disney World’s Magic Kingdom and California’s Disneyland Park.

A weak plot notwithstanding, The Ugly Dachshund is entertaining and worth watching. 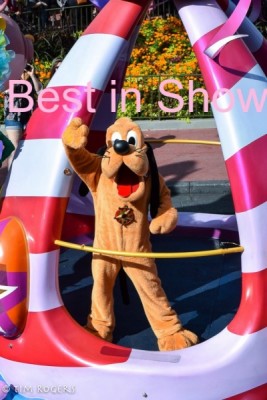 What do you think of The Ugly Dachshund? Let me know in the comments!

Sponsored Ad:  Would you like to help support The Mouse For Less website in continuing their mission of being THE Disney vacation planning resource?  You can do so by purchasing The Ugly Dachshund from our Affiliate Link through Amazon. Thanks so much for your support!