Based on the Reverend Albert Fay Hill’s 1968 book of the same name, Disney’s The North Avenue Irregulars was theatrically released on February 9, 1979. The live action mystery comedy is 100 minutes in length. Disney’s movie loosely portrays the real events chronicled in Hill’s book. To this end, the story’s setting was moved by Disney from New Rochelle, New York to the fictional town of New Campton. (1)

In the modern day, Reverend Michael Hill (Edward Herrmann), his young son Dean (Bobby Rolofson), and his young daughter Carmel (Melora Hardin) arrive in New Campton, where Hill is set to become the new preacher at the North Avenue Presbyterian Church. A quick response by the church’s members to a dangerous incident involving the elderly Delaney Rafferty (Douglas Fowley) demonstrates a tight-knit community, but the church’s secretary, Anne (Susan Clark), warns the new minister that he should complete church tasks himself rather than delegating them to the laity. The reasons why specific members of the church cannot be trusted vary, but one such reason, the propensity of the men in town to gamble, is made obvious when Hill, against Anne’s advice, delegates control of the church’s sinking fund to Delaney Rafferty’s wife, Rose (Patsy Kelly).

Sans his wife’s knowledge, Mr. Rafferty bets the entire sinking fund, $1,206, on a horse race, and when Hill and Mrs. Rafferty unsuccessfully attempt to get the money back from the bookie, Harry, the Hat (Alan Hale), the minister realizes that not only is the town embedded with bookies but the police and local government are complicit in this illegal gambling ring. Using a television appearance that night to lecture against gambling in general and New Campton’s gambling problem in particular, Hill attracts the attention of two investigators from the United States Treasury Department, Marv Fogelman (Michael Constantine) and Tom Voorhees (Steve Franken). This duo barges in on the reverend and insists that local men be organized to upend the gambling ring. None of the men in town are interested in helping, but five women active in the church—Mrs. Rafferty, Claire (Cloris Leachman), Jane (Karen Valentine), Vickie (Barbara Harris), and Cleo (Virginia Capers)—agree to cooperate with Fogelman and Voorhees. The five ladies have no experience whatsoever in crime fighting, but they display great enthusiasm after initial hesitation. Will the determination of these ladies be sufficient to dismantle the gambling ring?

The film could have been improved by further developing the finer points of the gambling operation and the government corruption, and by correspondingly shortening the numerous and lengthy chase scenes. Said segments are exciting, but the plot would have benefited from a closer look at the gamblers themselves. In particular, the connection between the local government and the gamblers is never explained save for Hill reaching said conclusion. Hill’s dealing with the police after the minister’s bizarre experience with Harry, the Hat in the backroom of the local tailor shop is undoubtedly negative, but this encounter provides no evidence of corruption within the police force—the cops were following protocol, and the shop owner, Sam (Carl Ballantine), acted quickly to cover his proverbial tracks.

Additionally, Hill’s children are awkwardly utilized. After playing major roles in the film’s opening moments, one gets the sense that Dean and Carmel are going to be closely involved with the flick’s shenanigans. Instead, save for a brief scene where Carmel implores her father to disassociate himself from the investigation, the young pair is relegated to cameos.

Although various people try to convince Reverend Hill that the town’s gambling problem is none of his business, precedent exists in American history for the church to assume some authority on this issue. In Puritan New England, the church was one of three sources of authority, along with the family and the state, charged with maintaining order and “whipping moral sluggards into line”; even if the family and the state failed to fulfill their duties, the church had to fulfill its responsibilities. (2) The Reforming Synod held at Boston in 1679 was one instance where ecclesiastical officials condemned a dereliction of duty by both the families and the secular government of the Massachusetts Bay Colony. (3) 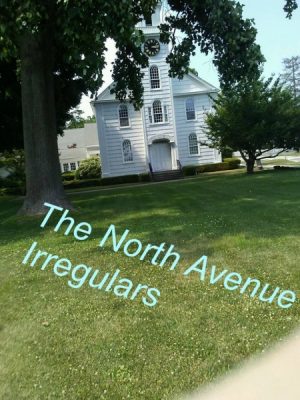 The North Avenue Irregulars features numerous exciting moments. Along the way, the congregation attempts to save Mr. Rafferty after the painter is startled off the church’s roof, the ladies recklessly race around town in their crime-fighting efforts, and a fiery explosion abruptly rocks the church. The latter moment is unnerving considering the lightheartedness of the movie’s previous action.

Animated caricatures of the forthcoming characters engage in assorted antics and emit strange noises during the opening credits.

Dean decides to pull the rope to the church’s bell, commencing several minutes of chaos as Mr. Rafferty, who was painting the bell tower, slips and attempts to get down to the ground with the help of his neighbors. A circus atmosphere pervades this segment.

The local fire department cannot promptly respond to Hill’s call to save Quasimodo…err, Mr. Rafferty, because the responders are attempting to get a cat out of a tree.

Like Jonathan Edwards’s classic sermons from the First Great Awakening, Hill’s first sermon in New Campton has no chance of putting listeners to sleep. The main difference between the two ministers is that Edwards’s efforts were enthusiastic and fiery, while Hill’s sermon was dull but less than thirty seconds in length, insufficient time to bore an audience.

In order to speak to Harry, Reverend Hill must pass through the main room of Sam’s tailor shop. Sam requires the bettors to give him their pants to iron, so the bettors and Hill meet in the backroom in their underwear.

After realizing that the horse race has commenced, Hill enthusiastically roots for Sundae Treat, the horse on which Mr. Rafferty bet the church’s money. Sundae Treat’s defeat is ironically a positive development for both the church and the town in the long run, for had Sundae Treat prevailed, the church would have made money on Rafferty’s bet, and Hill may not have been inspired to destroy the gambling ring.

The ladies initially display incompetence and disorganization in their roles as undercover detectives. Among other missteps, Claire forgets what to tell the bookie in the flower shop despite frequent reminders from Mr. Voorhees; Claire compounds her troubles by revealing Voorhees’s position as a government investigator; Rose allows her tape recorder to blare pre-recorded music while dealing with the bookie at the luncheonette and unsuccessfully tries to save face by bursting into song with Cleo and Vickie; Jane stumbles in relaying a potential gambler’s car color and direction to Marv; and all of the ladies fail to accurately position their cars for a decisive chase.

Though not a musical, The North Avenue Irregulars features a surprisingly good soundtrack.

Two lyrical numbers, the traditional hymn “Faith of Our Fathers” and the energetic band song “Pass a Little Love Around,” are performed during the film’s church services. The latter number is extremely catchy and underrated among Disney’s live action movie songs.

Additionally, a mysterious tune plays over the opening credits; a whimsical tune is played as the people of New Campton try to catch Mr. Rafferty in a large net; and a triumphant song accompanies the concurrent acceptance of the ladies to assist the investigators.

Edward Herrmann subsequently contributed to Touchstone Pictures’ Big Business (1988) and Hollywood Pictures’ Nixon (1995) for Disney. The former film provided the original theme for the “Soundstage Restaurant” at the then “Disney-MGM Studios,” now Disney’s Hollywood Studios. Soundstage Restaurant, which closed in 1998, was later themed after Beauty and the Beast (1991) and Aladdin (1992). The location now houses the park’s interactive Disney Junior stage show.

Cloris Leachman previously appeared in Charley and the Angel (1973) for Disney, and she subsequently contributed to Herbie Goes Bananas (1980) and Sky High (2005) for the studio.

In The North Avenue Irregulars, Vickie is grossed out by a chili dog abandoned in her car by one of the children. Since 2004, guests at Walt Disney World’s Magic Kingdom have been repulsed by the stench of a chili dog-scented burp from the giant Stitch animatronic at the “Stitch’s Great Escape!” theater-in-the-round show. Fortunately for people’s nostrils, Stitch’s Great Escape! has only operated on a “seasonal” basis, during Walt Disney World’s busiest times, since 2016.

Like most Disney comedies of its era, The North Avenue Irregulars is really silly, really bizarre, and really entertaining. The plot has some holes, but the movie is good family fun.

What do you think of The North Avenue Irregulars? Let me know in the comments!

Sponsored Ad:  Would you like to help support The Mouse For Less website in continuing their mission of being THE Disney vacation planning resource?  You can do so by purchasing The North Avenue Irregulars from our Affiliate Link through Amazon. Thanks so much for your support!