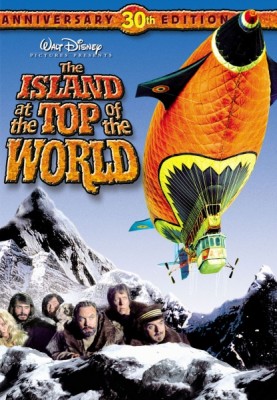 Based on Ian Cameron’s 1961 novel The Lost Ones, The Island at the Top of the World was theatrically released on December 20, 1974. The 93-minute flick, a commercial flop, was preceded by the short “Winnie the Pooh and Tigger Too,” which was subsequently repackaged as the third segment in The Many Adventures of Winnie the Pooh (1977). (1)

In 1907, a widower British aristocrat named Sir Anthony Ross (Donald Sinden) has one goal, to find his son, Donald Ross (David Gwillim), who went missing two years earlier while attempting to locate a legendary island in the Arctic where “whales go to die.” To aid his quest, Ross bypasses the help of Santa Claus and essentially coerces Professor John Ivarsson (David Hartman), an archeologist from the University of Minnesota temporarily teaching in Europe, to join the mission along with Captain Brieux (Jacques Marin), who has invented an impressive airship, Hyperion, for transportation. The trio then locates Oomiak (Mako Iwamatsu), an Eskimo who had traveled with Donald but got separated in the midst of danger, for potentially crucial instructions.

Back onboard the Hyperion, Ross, Ivarrson, Brieux, and Oomiak see something incredible, a place where whales go to die but humans went to live. This place is Astragard, an uncharted volcanic island with immense greenery and mountains, where Vikings have covertly resided in peace for centuries. With Ivarrson translating Norse into English, it soon becomes obvious that Donald is living happily in this utopia and that the natives are willing to arrange a reunion. Now deeming Donald a spy, however, Astragard’s High Priest, The Godi (Gunnar Öhlund), is in a less-than-accommodating mood, and he prepares to execute the newcomers. Donald’s girlfriend, Freyja (Agneta Eckemyr), frees the men, but they are hardly out of harm’s way. Will they survive this ordeal?

Martin Levine contributed a relatively positive review of The Island at the Top of the World in Newsday, praising especially the visuals and deeming the film superior to recent Disney efforts. Levine said, “Parents must find few Yuletide gifts more welcome than a good children’s movie. That’s what ‘The Island at the Top of the World’ is, and it comes from what recent years have made to seem an unlikely source—Walt Disney Productions. Since [Walt] Disney’s death, the company’s films have looked cheap and featured acting of sitcom broadness, with plots of like absurdity. ‘Island,’ which opened Friday at Flagship Theaters, shouldn’t be taken as heralding the return of the golden age; director Robert Stevenson has been too busy in the Disney mill for optimism. But the careful [word unintelligible] of the novel on which it is based (Ian Cameron’s ‘The Lost Ones’) has been retained, and the sets and special-effects reflect what must have been a larger-than-usual budget.” (2)

I would concur with Levine’s take on the acting in Disney’s live action films between 1967 and 1974—the performances in The Computer Wore Tennis Shoes (1969) and Now You See Him, Now You Don’t (1972), for example, are borderline wretched—but while these movies are hardly cinematic masterpieces, I find them immensely entertaining and would definitely recommend checking them out. You will be hard pressed not to laugh, sometimes hysterically.

Continuing his review, Levine offered a quip with The Island at the Top of the World, saying, “The story’s final twist is badly forced.” (3) I understand Levine’s point, though on viewing the film a second time, the moment is adequately foreshadowed by words uttered during the walk between Donald’s house and The Godi’s temple. For one protagonist, the past is the future.

The Hyperion airship is a reference to 2719 Hyperion Avenue, the Hollywood location of the Disney Studio from 1926 to 1940, when operations moved to a larger campus in Burbank, California. Disney’s first full length animated feature, Snow White and the Seven Dwarfs (1937), was created at the Hyperion Avenue studio. (4)

According to Dave Smith, chief archivist emeritus of The Walt Disney Archives, the gargantuan Hyperion was a mirage. Smith said, “The airship Hyperion was designed by Peter Ellenshaw, the movie’s production designer, and various-sized miniatures were built for the filming of the flying sequences by the special-effects department at the Disney Studios. For the segments featuring the cast in the gondola, a full-size gondola was built with only the very bottom part of the balloon. This was filmed on Stage 2 at the Studio. A full-scale airship was not constructed.” (5)

Sir Anthony Ross and Donald Ross come to realize their excesses. The former was too demanding in grooming his son for the family business, while Donald overreacted and risked his life. Sir Anthony’s concern for Donald is shown through the former’s willingness to take every transportation risk in the dead of winter to locate his son.

The Island at the Top of the World is visually interesting with fire, lava, arrow battles, cascades, explosions, and the Hyperion, though the quality of the actual settings is dated from a 2016 perspective. The volcano’s surroundings look especially unrealistic as does the appearance of The Godi’s temple. These locales are clearly painted sets on a soundstage.

If nothing else, the film is colorful. The varied colors during the opening credits and the volcano scene are reminiscent of those from the “Rite of Spring” segment of Fantasia (1940), albeit without dinosaurs.

The acting in The Island at the Top of the World is adequate, definitely superior to that in other Disney films of the era. Much of the dialogue, however, is either not in English or, in the case of Captain Brieux, uttered with a heavy accent, rendering comprehension problematic. Subtitles would have been a useful addition.

The Island at the Top of the World is not a comedy, though comic relief is occasionally provided, most notably by Josephine the dog and Oomiak.

Professor Ivarsson notes that sulfur is good for the lungs. The element’s effect on one’s nose is less beneficial, however, unless you like the smell of rotten eggs.

I found one exchange late in the film between Freyja and Ross over the rise of the Vikings from the sea awkwardly hysterical.

Coincidentally, Ivarrson, a professor at the University of Minnesota, interacts with Vikings, “real” Vikings, not members of the popular National Football League franchise.

The Island at the Top of the World was the seventeenth of nineteen films directed by Robert Stevenson for Disney, dating back to Johnny Tremain (1957). Stevenson was named a Disney Legend in 2002. (7)

One of the minor characters in The Island at the Top of the World is named Sven (Torsten Wahlund). Sven is also the name of Kristoff’s reindeer in Frozen (2013). Both films contain arctic and Norwegian overtones.

Sir Ross deems Captain Brieux “brave, but mad as a hatter.” The Mad Hatter was a key player in Alice in Wonderland (1951).

A replica of the Hyperion sits atop the “Café Hyperion” restaurant in Discoveryland at Disneyland Park Paris. (9)

The amphitheater at Disney’s California Adventure is called “Hyperion Theater.” A new Broadway-caliber production based on Frozen is scheduled to debut in the summer of 2016, replacing the long-running “Disney’s Aladdin – A Musical Spectacular.” 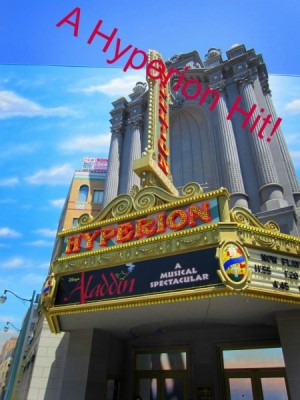 In 2015, the Superstar Television Theater at Disney’s Hollywood Studios was renamed “Hyperion Theater.” The venue currently houses an interactive show, “For the First Time in Forever: A Frozen Sing-Along Celebration.”

In late 2010, Disney announced that the former Pleasure Island area at the then-Downtown Disney would be altered into “Hyperion Wharf.” The idea was eventually scrapped, and in 2015, Downtown Disney as a whole was rechristened “Disney Springs.” (10)

Guests can experience the cuisines and cultures of England, France, and Norway at their respective pavilions in Epcot’s World Showcase.

The Island at the Top of the World picks up after a slow start, and features interesting visuals and a suspenseful plot.  Disney history buffs should definitely watch it because of the Hyperion and Discovery Bay connections. Relatively speaking, it is a 2.5 out of 4-star film.

What do you think of The Island at the Top of the World? Let me know in the comments!

Sponsored Ad:  Would you like to help support The Mouse For Less website in continuing their mission of being THE Disney vacation planning resource?  You can do so by purchasing The Island at the Top of the World from our Affiliate Link through Amazon. Thanks so much for your support!