Based on Edgar Rice Burroughs’ 1912 novel Tarzan of the Apes, Disney’s Tarzan was released on June 18, 1999 as the company’s 37th full-length animated feature. The 88-minute flick culminated a decade known as the “Disney Renaissance,” where Disney broke out of a prolonged animation drought by releasing 10 mostly critically-acclaimed cartoon features.

En route to an unspecified destination, a married couple and their infant son escape a burning ship and take refuge in the middle of an African jungle. The dire situation commences well enough with the family creating a serviceable shelter, but any semblance of happiness quickly terminates when a leopard named Sabor kills the baby’s parents, leaving the infant orphaned.

With all hope seemingly lost, a female gorilla named Kala stumbles upon the wreckage and takes the human child as her own. The gorilla leader, Kerchak, raises staunch objections to Kala’s decision, but Kala proves to be an ideal mother, nurturing the child, now named Tarzan, as a responsible human mother would.

Still, Kerchak is unable to accept Tarzan. The gorilla questions whether the now young-adult human will remain loyal to his animal family. Kerchak’s doubts intensify when a trio of British travelers, Professor Archimedes Q. Porter, the professor’s daughter Jane Porter, and the Porter’s guide Clayton, arrive to study the indigenous species. Soon enough, Tarzan and Jane fall in love with each other, and a difficult choice must be made. Will Tarzan leave the jungle to live with Jane in Europe?

As relayed through the song “Two Worlds,” Tarzan faces the conundrum of being a human amongst jungle animals. He often questions whether he fits in with either faction. On this note, the scenes where the title character realizes that he is relatable to peers on both sides are, in my opinion, some of the most beautiful in any Disney movie.

Tarzan comes to consider both the animals and the humans as his family, and he will do anything he can to protect them from harm. This determination sometimes leads to awkward situations. When Kerchak threatens to attack the expedition members, for example, Tarzan physically fights the gorilla leader. Conversely, when Clayton later reveals his true evil colors, Tarzan valiantly fights to defend his gorilla family, Kerchak included.

Tarzan isn’t hampered by doubters. Rather, he only fights harder when questioned.

When Terk, a young gorilla, and his friends sarcastically tell Tarzan that he can hang out with them if he retrieves an elephant hair, the human actually completes the arduous task.

The title character is also determined to prove Kerchak wrong, to show that he can be trusted by the gorillas. Indeed, even after Kerchak deems Tarzan a traitor for mingling with Jane and the other humans, Tarzan returns against all odds—no reference to the 1984 Phil Collins song intended, though it can be considered foreshadowing —to protect his jungle family.

The flick features several exhilarating segments. Along the way, Tarzan battles Sabor, attempts to protect Jane from an army of aggressive monkeys, and strives to stave off a gang of malicious hunters.

As often as Tarzan is melancholy, it is as frequently hilarious.

Terk and Tantor, the latter an elephant, engage in numerous shenanigans, such as pondering human possessions and playing “dress up.”

When examining the still unnamed baby at the beginning of the film, Kala observes the infant’s diaper. Let’s just say it didn’t smell that great. Eww, what a stink!

The adult elephants have some interesting conversations, including a scholarly debate over whether piranhas exist in Africa. In any event, these elephants, unlike Tantor, are completely oblivious to their surroundings. Look out behind you!

Your enjoyment of Tarzan’s soundtrack will likely be determined by one factor: Phil Collins. If you like Collins’ music, you’re in luck because he sings four of the five numbers in the movie proper. In other words, unlike other films from the “Disney Renaissance,” such as Pocahontas (1995) and Hercules (1997), a single person performs both the in-film and popular versions of the songs. Collins’ in-film renditions exist in the background; singing by actual characters is extremely limited here.

Similar in mood to “Two Worlds,” “You’ll be in My Heart” emphasizes key themes, most notably the lasting power of love. On this note, Tarzan reassures Kala that she will always be his mother even if he elects to leave with Jane.

The upbeat “Son of Man” is my favorite song in the movie. Coupled with fun visuals of Tarzan, Terk, and Tantor enjoying life in the jungle, this number is delightful.

“Trashin’ The Camp” is the only song not sung by Collins in the movie. Rather, Rosie O’Donnell, the voice of Terk, performs this jazz number while the curious animals are inadvertently destroying Professor Porter’s camp.

An inanimate version of Mrs. Potts from Beauty and the Beast (1991) is displayed at Porter’s camp.

Another story of animals raising a human was told through The Jungle Book (1967).

Kala’s unbreakable love for Tarzan in spite of familial animosity reminded me of Mrs. Jumbo’s love for her son in Dumbo (1941).

In providing comic relief, Terk and Tantor are relatable to Timon and Pumbaa from The Lion King (1994).

The scene where Tarzan implores Kerchak to tolerate the expedition members is eerily similar to the segment in Pocahontas where the title character begs her father to seek peace with the settlers.

The opening scenes of Tarzan, where the family attempts to survive in an uninhabited locale following a shipwreck, harken back to Disney’s live-action movie The Swiss Family Robinson (1960). 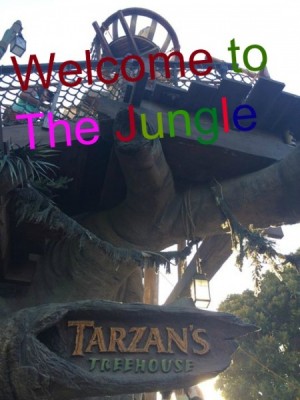 Simultaneously heartwarming and hilarious, Tarzan is an amazing film.

What do you think of Tarzan? Let me know in the comments!

Sponsored Ad:  Would you like to help support The Mouse For Less website in continuing their mission of being THE Disney vacation planning resource?  You can do so by purchasing Tarzan from our Affiliate Link through Amazon. Thanks so much for your support!