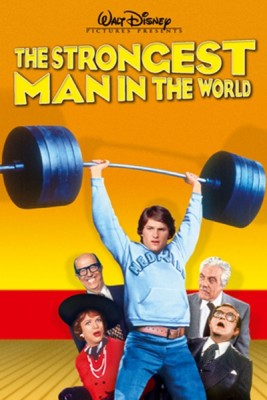 Following The Computer Wore Tennis Shoes (1969) and Now You See Him, Now You Don’t (1972), The Strongest Man in the World was theatrically released as the final installment of the “Medfield College trilogy” on February 6, 1975. The film, the fifth of six overall Disney flicks to take place at the fictitious Medfield College, is 92 minutes in length.

On July 19, 1974, Joe Flynn, who portrayed Dean Eugene Higgins in each installment of the Medfield College trilogy, passed away following a swimming accident. In addition to The Strongest Man in the World, Flynn was posthumously featured in The Rescuers (1977), where he voiced Madame Medusa’s henchman, Mr. Snoops.

Flynn was the only actor to partake in four Medfield College films, having also made a brief cameo appearance as a commercial host in Son of Flubber (1963).

Professor Quigley (William Schallert), the science teacher in The Computer Wore Tennis Shoes, regains his role as Medfield’s featured academic after being replaced by Professor Lufkin (William Windom) in Now You See Him, Now You Don’t.

Walking down the street with his friends, Dexter Riley, now a senior at Medfield College, manages an incredible feat, bending a light post before restoring it to its proper position. How did Dexter get so strong? Well, he ate cereal! No, not Wheaties, the “Breakfast of Champions,” but an inferior product called Crumply Crunch, which was inadvertently mixed with an acid in Professor Quigley’s Creative Science class. The acid, not the cereal itself, provides Dexter’s strength.

Crumply Crunch may be a workaday breakfast option, but its place in the story provides a potentially valuable application for the strength formula. With Medfield again in financial straits and Dean Higgins on the verge of being fired by the board of regents, Higgins decides to contact the Crumply Crunch cereal company to propose a reciprocal deal: Crumply Crunch can utilize the formula for a marketing bonanza, while Medfield will receive needed funds.

A demonstration by Higgins before Crumply Crunch’s president, Harriet Crumply (Eve Arden), and board of directors succeeds, and a contest is devised. Crumply Crunch, with the aid of the formula, will sponsor Medfield College’s weightlifting team in a televised competition against the defending national champions, Springfield State College. The latter school, Medfield’s perennial nemesis, will receive the backing of Crumply Crunch’s primary competitor, the Krinkle Krunch cereal company. Springfield State has the talent, but Medfield has the potent weapon. Which squad will prevail?

Medfield’s continued financial problems were foreshadowed during a discussion between Dexter and his friend Debbie (Joyce Menges) in the final scene of Now You See Him, Now You Don’t.

In a textbook example of alliteration, Dean Higgins decides to contact “the Crumply Crunch cereal company, Coyote Corners, Courant County, Connecticut.” This location does not really exist, but it rolls off the tongue nicely.

Viewers expecting a politically correct production should avoid The Strongest Man in the World at all costs. The acupuncture scene at the Chinese restaurant in the middle of the film is extremely stereotypical.

The happy occurrences in the movie ironically arise from mistakes and ignorance, showing that it is sometimes better to be lucky than good.

The blame afforded Dean Higgins for Medfield’s extravagant science expenditures is superficially unfair because in the first two films, Higgins adamantly protested the prodigious desires of Professors Quigley and Lufkin. Then again, Higgins succumbed to their requests. There is often a fine line between fiscal responsibility and the need to purchase requisite equipment.

Though Dexter was not scolded by Professor Quigley for chomping on a sandwich during an exam in The Computer Wore Tennis Shoes, a student named Elmer (Barry Greenberg) is reprimanded by four teachers, a janitor, and Dean Higgins for eating in class in The Strongest Man in the World.

Medfield College’s location is never disclosed in the trilogy. However, upon being introduced to Dean Higgins, Harriet Crumply describes Medfield College as “that funny little school downstate.” Assuming the Crumply Crunch boardroom is at the Coyote Corners address previously mentioned by Higgins, Medfield College is located in Connecticut.

At the weightlifting competition, Dean Higgins brags to Regents Appleby (Burt Mustin) and Dietz (Harold Gould) that Dexter is one of Medfield’s “better students.” Dexter was placed on academic probation in The Computer Wore Tennis Shoes, so has Dexter become a better student, or is Dean Higgins merely attempting to impress his superiors?

Although Arno and Cookie return and receive much airtime, they serve as secondary villains in The Strongest Man in the World. Acting as a double agent between the rival cereal companies, Harriet Crumply’s nephew Harry Crumply (Dick Van Patten) is the flick’s main antagonist.

As was the case in the first four Medfield films, a competitive event, weightlifting, highlights The Strongest Man in the World. Previously, The Absent-Minded Professor (1961) featured basketball, Son of Flubber featured football, The Computer Wore Tennis Shoes featured an academic tournament, and Now You See Him, Now You Don’t featured golf.  In each case, the underdog prevails despite possessing astronomically inferior talent.

Though there is no lyrical music in The Strongest Man in the World, a catchy, whimsical tune is played over the opening credits and reprised while Dexter and his friends walk to school after Dexter eats his fateful meal. Additionally, circus music complements Dean Higgins’s trapeze act in the boardroom. The man on the flying chandeliers…err, trapeze!

Humorous sketches of a strong lad, an ancient god, and King Kong accompany the opening credits.

Though it pains him to do, Dean Higgins has to inform Professor Quigley of the latter’s dismissal. Higgins’s anguish arises from his foot, not his heart.

As he was in the first two films, Schuyler is uproarious in The Strongest Man in the World. In particular, his lines, expressions, and mannerisms during the opening science lab scene are so awkward and forced that I laughed like a hyena.

Schuyler and Roscoe (John Myhers), the latter of the Crumply Crunch board, laugh at their own jokes, which are paradoxically funny because they do not amuse anybody else.

Dexter talks to a cow on the telephone after midnight. He was not requesting warm milk.

Humans, dogs, and cows temporarily morph into dragons upon consuming the special formula.

Professor Quigley is honestly snarky with Dean Higgins during a meeting after Dexter’s initial strength demonstration.

Arno and Cookie struggle to break into Medfield College. Arno exudes pure terror for his life.

Dexter convinces a rambling Dean Higgins to give him the keys to Higgins’s car. Off to the races!

The optimistic delivery of the television announcer (Jonathan Daly) at the weightlifting competition seems to annoy his partner.

The Strongest Man in the World was the last Medfield College flick until 1997, when a remake of The Absent-Minded Professor, Flubber, was released.

The Strongest Man in the World marked Kurt Russell’s final appearance in a live action Disney film until 1992, when he starred as the title character in Touchstone Pictures’ Captain Ron. In 2004, Russell starred as Coach Herb Brooks in Miracle, Disney’s retelling of the immortal journey of the 1980 United States Olympic hockey team.

Brutus, the name of Schuyler’s dog, was also the name of the Great Dane in The Ugly Dachshund (1966).

Cereal was also prominently featured in 101 Dalmatians (1961) in the form of “Kanine Krunchies.”

In the queue for Epcot’s “Journey Into Imagination With Figment,” guests can hear an announcement for Dexter Riley and see Dean Higgins’s office door. 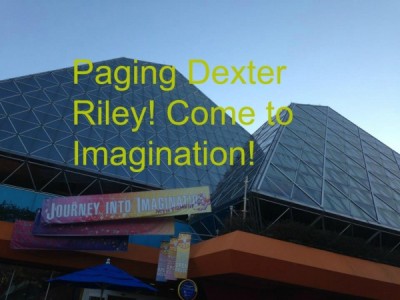 Although guests cannot swing on chandeliers like Dean Higgins did in the boardroom, the indoor, interactive queue for the Magic Kingdom’s “Dumbo the Flying Elephant” attraction allows children to participate in various circus-type activities.

Enhanced by nutritious cereal, milk, and other substances, which you should probably not consume for breakfast, The Strongest Man in the World triumphantly culminates the Medfield College trilogy.

What do you think of The Strongest Man in the World? Let me know in the comments!