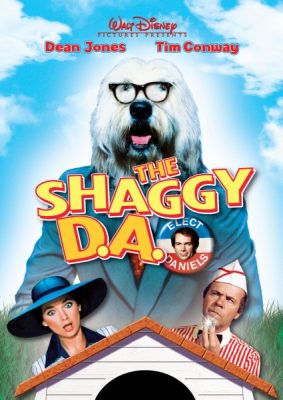 A sequel to The Shaggy Dog (1959), The Shaggy D.A. was theatrically released on December 17, 1976. The live action comedy is ninety-one minutes in length.

In the suburban town of Medfield, a string of burglaries has the citizenry on edge. Much to the populace’s chagrin, the local District Attorney, “Honest” John Slade (Keenan Wynn), is seemingly derelict in his duties, easily apprehending criminals but just as quickly setting them free with no punishment. The only solution to the problem is for Slade to be ousted in the upcoming election, and, after his house is robbed twice on the same day, local lawyer Wilby Daniels (Dean Jones) throws his hat in the ring. Daniels’s campaign is managed by his wife, Betty (Suzanne Pleshette); his son, Brian (Shane Sinutko); and his neighbor Admiral Brenner (John Myhers).

Daniels’s solid credentials notwithstanding, his prospects of defeating Slade and his cronies are slim, and these odds grow even smaller when the Borgia Ring, the same ring that facilitated Daniels’s transformation into a dog in The Shaggy Dog, is stolen from the local art museum and the ring’s infamous inscription “In canis corpore transmuto” (“Into a dog’s body I change”) is repeatedly read aloud. With each reading, Daniels morphs into the body of Elwood, the shaggy canine of Tim (Tim Conway), the eccentric local ice cream man.

Dogs may be man’s best friend, but Daniels’s best chance to win the election is to remain human. Will he find a way to prevail?

The Shaggy D.A.’s plot starts interestingly enough with the seeds being sown for a contentious political race, but the story gradually slumbers. The closing scenes are largely action sequences with only loose connections to the overall plot. 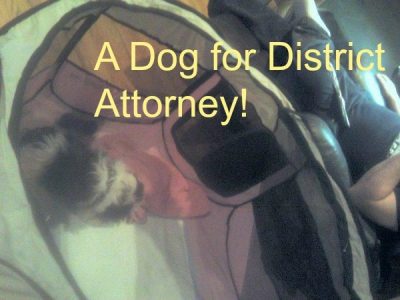 Announcing his resignation from the presidency in 1974, Richard Nixon said, “Always remember others may hate you but those who hate you don’t win unless you hate them. And then you destroy yourself.” Slade learns this lesson the hard way in The Shaggy D.A.. His incessant repeating of “In canis corpore transmuto” to destroy Daniels’s career may instead have a boomerang effect.

The Shaggy D.A. is uproarious at points.

Admiral Brenner tries to jumpstart Daniels’s campaign by offering to donate a quarter.

If Daniels wants to “clean up” Medfield, he should probably avoid appearing in print with his face smothered in barbecue sauce.

After forcing Tim to recite all forty-four flavors sold by his ice cream truck, Brian Daniels passes over complex concoctions like gingerbread rocky road slush and avocado surprise in favor of a simpler flavor: vanilla.

Daniels, after shapeshifting into Elwood while campaigning on live television, fails to perform requested tricks. He can only muster an audible “woof.”

Tim takes Elwood to a local bar to sing classic pub tunes, such as “Mary Had a Little Lamb” and “Down by the Old Mill Stream.” Unfortunately for Tim, Elwood does not comply.

Daniels offers a $2,000 reward for the recovery of the Borgia Ring, a bit more than the twenty-five cents he gives Brian for cleaning the garage.

A food fight involving cherry pies ensues at a function hosted by Slade.

While in canine form, Daniels acts like a real dog. Among other activities, he roller skates and drives a truck. Ok, well, maybe normal dogs don’t do those things, but so it goes.

Locales called Medfield were previously featured in The Absent-Minded Professor (1961), Son of Flubber (1963), The Computer Wore Tennis Shoes (1969), Now You See Him, Now You Don’t (1972), and The Strongest Man in the World (1975). In these films, Medfield was the name for colleges rather than towns.

Suzanne Pleshette had previously appeared with Dean Jones in The Ugly Dachshund and Blackbeard’s Ghost.

Keenan Wynn had previously starred as the main antagonist in The Absent-Minded Professor, Son of Flubber, Snowball Express, and Herbie Rides Again for Disney.

Michael McGreevey, who portrayed Schuyler in The Computer Wore Tennis Shoes, Now You See Him, Now You Don’t, and The Strongest Man in the World, is afforded a small role in The Shaggy D.A., portraying Sheldon at the dog pound.

Another Honest John, with morals comparable to those of John Slade, was featured in Pinocchio (1940).

The Shaggy D.A. is often hysterical, even if the plot is a bit lacking.

What do you think of The Shaggy D.A.? Let me know in the comments!

Sponsored Ad:  Would you like to help support The Mouse For Less website in continuing their mission of being THE Disney vacation planning resource?  You can do so by purchasing The Shaggy D.A. from our Affiliate Link through Amazon. Thanks so much for your support!