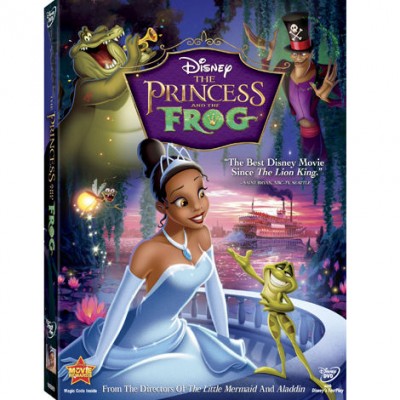 The forty-ninth full length animated feature in Disney history, The Princess and the Frog was theatrically released on December 11, 2009. It is based loosely on the Brothers Grimm fairy tale “The Frog Prince” and is ninety-seven minutes in length.

Back to the Past and the Future

The Princess and the Frog was in many ways a throwback film for Disney. The movie was Disney’s first hand-drawn animated feature since the critically-panned Home on the Range (2004), a development ensured by Chief Creative Officer John Lasseter’s desire to continue to mix hand-drawn animation with modern computer-generated animated flicks, such as Chicken Little (2005), Meet the Robinsons (2007), and Bolt (2008). (1)

The Princess and the Frog also returned legendary directors John Musker and Ron Clements to Disney. The duo previously directed The Little Mermaid (1989), Aladdin (1992), Hercules (1997), and Treasure Planet (2002) for the company. (2)

The film was not completely old fashioned, however. The Princess and the Frog broke new ground with Tiana becoming the first African American princess in Disney history.

The film was well received critically but garnered only average returns at the box office, perhaps because boys were turned off by the word “princess” in the title. (3) Such was the conclusion of Disney’s research team and a key reason why the project “Rapunzel” was renamed Tangled the following year. (4)

In early twentieth century New Orleans, a young woman named Tiana tirelessly labors as a waitress at Duke’s Café to earn enough money to open her own restaurant, a goal originally proposed by her late father. She is well short of the requisite money, but, out of the blue, her rich friend Charlotte La Bouff affords her the balance in exchange for a ton of delicious beignets to entice the visiting Prince Naveen of Maldonia at a masquerade ball.

On the way to the party, Prince Naveen makes a wrong turn. He decides to deal with a voodoo witch doctor named Dr. Facilier, who turns Naveen into a frog and plans to use the Prince’s valet, Lawrence, to elevate himself into the most powerful man in The Big Easy!

As if this dark magic was not bad enough, Tiana is simultaneously informed that she has been outbid for the building she wants for her restaurant. Tiana is devastated, and New Orleans is in grave danger of being duped into disaster. What will become of the girl and her city?

The protagonists of The Princess and the Frog struggle with a common problem: finding the proper balance between work and leisure. Similarly, it is shown that effort, rather than mere magic, is needed to make one’s dreams come true.

The most complex character in the movie is Charlotte La Bouff. Seemingly selfish on the surface due to her father’s spoiling, Charlotte is actually incredibly selfless. As the old saying goes, “don’t judge a book by its cover.”

In the tradition of Disney’s greatest animated movies, The Princess and the Frog is a musical. The vast majority of the film’s soundtrack is the work of Randy Newman, who previously contributed music to such Disney and Pixar films as James and the Giant Peach (1996), Toy Story (1995), A Bug’s Life (1998), and Monsters Inc. (2001). (5)

Two of Newman’s songs from The Princess and the Frog, “Almost There” and “Down in New Orleans,” were nominated for “Best Original Song” at the 2010 Oscars, though “The Weary Kind” from Crazy Heart took the prize. Newman had previously won an Oscar for Best Original Song in 2002 with “If I Didn’t Have You” from Monsters Inc., and he won again in 2011 for “We Belong Together” from Toy Story 3 (2010).

On the whole, I think The Princess and the Frog’s soundtrack is exceptional and ranks with any of the gems from the 1990s and above those of  Tangled (2010) and Frozen (2013). The songs, unfortunately or otherwise, just do not receive as much exposure as those from other Disney films.

The Princess and the Frog is not a comedy, but laughs are had throughout.

Much to Lawrence’s chagrin, Prince Naveen is quick to assimilate to New Orleans. Lawrence would rather get on to the masquerade ball than dance in the street.

Louis the alligator brings awkwardness, bluntness, and a mean Satchmo impression. Man, can he play that trumpet! 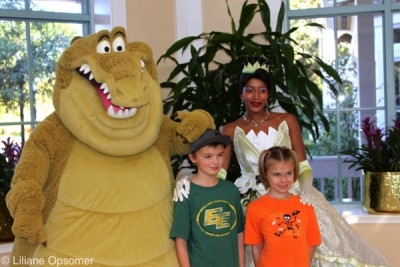 Three frog hunters are concurrently inept and hampered by Murphy’s Law, not a good combination.

Though seemingly burnt out at first appearance, Ray the firefly retains much energy. He can turn entangled frogs into a disco ball and travel at nearly supersonic speeds. Ray to the rescue!

A bayou was previously featured in The Rescuers (1977).

Several characters wish upon a star, an act prominently introduced in Pinocchio (1940).

Big Daddy La Bouff’s costume at the masquerade ball is reminiscent of the title character from Hercules.

Two hotels at Walt Disney World, “Port Orleans Riverside” and “Port Orleans French Quarter,” are themed after New Orleans. Both of these resorts are priced in the “moderate” category.

Though not prepared by Tiana, guests at Walt Disney World can enjoy beignets throughout the day at Port Orleans French Quarter’s “Sassagoula Floatworks and Food Factory” food court. At Disneyland in California, beignets and other Cajun offerings are available at Downtown Disney’s “Ralph Brennan’s Jazz Kitchen” and Disneyland Park’s “Café Orleans.”

Disneyland Park features an entire land, “New Orleans Square,” dedicated to the famed city. Here, guests can enjoy a pair of classic attractions in “Pirates of the Caribbean” and “The Haunted Mansion,” and dine at “Café Orleans” and “Blue Bayou.” The latter establishment offers views of “Pirates of the Caribbean.” A portion of Tokyo Disneyland’s Adventureland is also themed after New Orleans.

With heartwarming moments, whimsical characters, and an amazing soundtrack, The Princess and the Frog is a contemporary Disney gem.

What do you think of The Princess and the Frog? Let me know in the comments!

Sponsored Ad:  Would you like to help support The Mouse For Less website in continuing their mission of being THE Disney vacation planning resource?  You can do so by purchasing The Princess and The Frog from our Affiliate Link through Amazon. Thanks so much for your support!