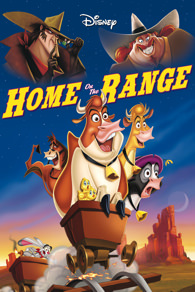 Home on the Range was theatrically released as the forty-fifth full length animated feature in Disney history on April 2, 2004. It is seventy-six minutes in length.

The film started towards its eventual structure in 2001, changing course from an initial project called “Sweating Bullets,” which was scheduled to be released in late 2003. (1) Home on the Range maintained many elements from “Sweating Bullets,” including composer Alan Menken’s music. (2)

Way out west, a notorious crook named Alameda Slim swipes Abner Dixon’s cattle in the middle of the night, and, void of alternatives, the elderly Dixon sells both his farm and the one cow that was not taken, Maggie. Maggie is sold to Pearl Gesner, the owner of the “Patch of Heaven” farm, which holds numerous animals, including two cows: the stuffy Mrs. Calloway and the socially-awkward Grace.

The three cows are quickly united by a common goal, detaining Slim. You see, finances are dire, and if Pearl does not pay her $750 debt to the bank within three days, Patch of Heaven will be auctioned off. Conveniently, a $750 reward is being offered for the capture of Slim, but three little cows are just no match for a professional bandit. Right?

The plot of Home on the Range is poorly developed. The mental state of Pearl over her farm’s probable demise is captivating and depressing at moments, but this turmoil serves more as a loose thread than a focal point. The eccentric behaviors of individual characters are more interesting and engaging than the story itself, which unfolds with no real direction. In other words, comic relief dominates in Home on the Range at the expense of storytelling. I personally love comedies and enjoyed Home on the Range but not because of its plot.

Lucky Jack the rabbit illustrates the plot’s shallowness. Jack is teased in the introduction and plays a fairly significant role later on, yet he feels like a complete afterthought. He was there but did not add anything.

Great feats are often attempted by seemingly inferior beings. In Home on the Range, baby chicks try to change Mrs. Calloway’s decisions, and the cows embark on their grand mission to reign in Slim.

The animation quality in Home on the Range is inconsistent. While many of the backgrounds, especially the skies, are excellent, other portions are reminiscent of Saturday morning cartoons. The animation of the pigs borders on horrid.

The featured number, “Home on the Range,” adds excitement and anticipation throughout, and “Little Patch of Heaven” provides a fun introduction to Pearl’s farm. You will likely want to jump up and dance to the latter number!

My favorite song in the movie, however, is “Will the Sun Ever Shine Again.” This beautiful song, which is performed by Bonnie Raitt, deals with regaining hope in the darkest moments of life.

Some of the characters sing as a hobby. Slim’s yodeling is captivating enough to hypnotize his listeners, while Grace…well, I have nothing nice to say about her singing, so I will not comment on it… Ok, her singing is comically bad! There; I said it. Now, let’s move on to another topic.

If not consistently hilarious, the flick’s perpetual humor will probably keep you grinning…or rolling your eyes.

Verbal humor, including homophones, slang, translations, and puns, are incorporated throughout the movie.

Maggie enjoys county fairs, barnyard football, and having fun in general. She can be gross with the piggies, but they do not seem to mind; fortunately or otherwise for the audience, this movie was not enhanced for Odorama.

Buck the horse is a “legend in his own mind.” He dreams of becoming the next Rocky Balboa but is relegated to playing tic-tac-toe, where he currently trails Rusty the dog by a 27-6 score.

Slim’s henchmen are seemingly incapable of recognizing their master incognito. Come on guys, it’s me; I’m just wearing a disguise!

Abstract animation is also incorporated in Fantasia (1940), Dumbo (1941), and various segments of the package films of the 1940s.

The Wild West is also the setting for the “Blue Shadows on the Trail” and “Pecos Bill” segments of Melody Time (1948).

Like Slim, Vice Principal Lamar Bone from Disney’s “Doug” enjoys yodeling, though the latter does not use it as a form of hypnosis.

In appearance and mannerisms, Lucky Jack reminds me of the title character from Who Framed Roger Rabbit (1988).

Although no attractions or regular character meets directly based on Home on the Range are featured in Disney’s theme parks, guests can interact with cows, pigs, and goats at the “Affection Section” petting zoo in the Rafiki’s Planet Watch area of Walt Disney World’s Animal Kingdom theme park. 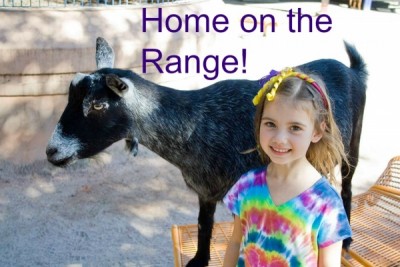 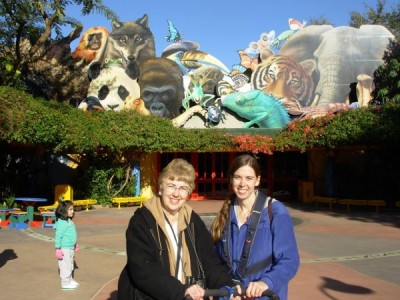 A more intense runaway train ride can be found in the Animal Kingdom’s “Expedition Everest,” which includes a backwards section.

The train chaos in Home on the Range commences in a mine. The Magic Kingdom’s Fantasyland houses “Seven Dwarfs Mine Train,” a tame coaster with some thematic surprises.

A luau like the one mentioned by Maggie to the piggies is offered every Tuesday through Saturday at Walt Disney World’s Polynesian Village Resort. This luau, “Disney’s Spirit of Aloha Dinner Show,” features a meal and theatrical entertainment.

Relying on perpetual humor to atone for a shallow plot, Home on the Range is one of Disney’s weaker animated movies. Still, it is a fun watch if you limit your expectations. I thought it would be awful but was pleasantly surprised.

What do you think of Home on the Range? Let me know in the comments!

Sponsored Ad:  Would you like to help support The Mouse For Less website in continuing their mission of being THE Disney vacation planning resource?  You can do so by purchasing Home on the Range from our Affiliate Link through Amazon. Thanks so much for your support!