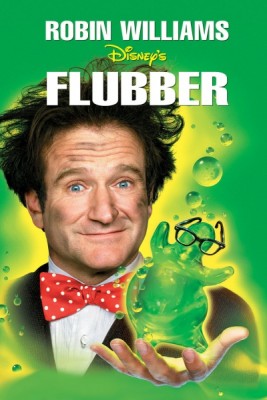 A remake of Disney’s 1961 live action comedy The Absent-Minded Professor, Flubber was theatrically released on November 26, 1997. The 93-minute film, a box office success in spite of generally poor reviews, was the sixth and, to date, final Disney movie to be set at the fictitious Medfield College.

The outline of Flubber’s plot is essentially the same as that of The Absent-Minded Professor, though the character names are starkly different: A chemistry professor at Medfield College, Philip Brainard (Robin Williams), discovers an incredible substance, Flubber, short for “flying rubber,” but he cannot revel in glory because his preoccupation with science has caused him to miss three scheduled weddings and seemingly lose the love of his life, Dr. Sara Jean Reynolds (Marcia Gay Harden). Compounding Brainard’s problems, a former friend from Rutland College, Professor Wilson Croft (Christopher McDonald), attempts to coerce Reynolds into marriage, and a licentious Medfield creditor, Chester Hoenicker (Raymond J. Barry), plots to steal Flubber for his own benefit and close the school. Will Professor Brainard’s situation improve?

Roger Ebert of the Chicago Sun-Times was extremely unimpressed with Flubber, giving the film one star. Ebert did not mince words in his review, saying, “Flubber is a substance that somehow magnifies energy, allowing objects to bounce faster and higher than they should. Barely drop some, and it rebounds crazily off the walls. ‘Flubber’ the movie seems to be made out of anti-flubber; you drop it, and it stays on the floor. Although the movie may appeal to kids in the lower grades, it’s pretty slow, flat and dumb.” (1) Ouch!

Janet Maslin of the New York Times offered a tepid review of Flubber, sensing wasted potential in the lead casting of Robin Williams because excessive subplots, most notably Brainard’s respective relationships with his fiancé and enemies, limited the late actor’s ability to improvise, as he had brilliantly done as the Genie in Aladdin (1992). Maslin especially noted that Flubber’s villain battles were hackneyed retreads of those from Writer and Producer John Hughes’s previous efforts for 20th Century Fox Home Alone (1990) and Home Alone 2: Lost in New York (1992). (2) Coincidentally, Hughes’s Home Alone 3 was released by 20th Century Fox just two weeks after Flubber’s debut.

Newsday columnist John Anderson was more optimistic on Flubber, affording the flick 2.5 out of four stars and describing it as “uneven but good natured.” (3)

From an audience’s perspective, Flubber had discernible color in neither The Absent-Minded Professor nor that movie’s sequel, Son of Flubber (1963), because these films were shot in black and white. In producing Flubber, it was decided to make the substance green for improvisation purposes. On this note, Robin Williams said, “You have to imagine playing with . . . {the absent co-star, in this case, Flubber.} You have to give it a depth and a weight. You’re improvising with providing a stimulus for them to work off.  Originally, it [Flubber] was going to be purple. Then they went with the green because it plays better: You can do more with light and texture – and mucus!” (4) Yuck!

Unlike The Absent-Minded Professor, where Flubber was a static substance, albeit one with amazing scientific potential, the title matter in Flubber displays a mind of its own, morphing into different shapes and eccentrically dancing to Mambo.

In Son of Flubber, Ned Brainard explained to a jury that progress often arises from mistakes. On a similar note, Robin Williams, in reminiscing on Flubber’s production, said, “We [Disney] had this grad student in chemistry, and it was fun talking to him, even if you’re dealing with totally theoretical things. The technobabble is wonderful. He was basically telling us the potential for superpolymers and superfluids and supersaturatred solutions. Also, he reinforced this wonderful idea I’ve always had that it’s often in accidents that discovery occurs. Something explodes and creates something else. We wanted to honor a different mind-set.” (5)

A new sidekick, a hovering robot called Weebo (voiced by Jodi Benson), assists Brainard throughout the flick. Weebo is viable for comic relief purposes and as an aide to the professor, but an attempt to make her a second lover for Brainard falls flat—nothing in the story pushes the audience to gain emotional attachment for the robot. Especially in the wake of Williams’s tragic death, some of their conversations about love are heartwarming in general terms, but Weebo’s role here is superfluous.

Weebo is interesting from a promotional standpoint. Images from numerous Disney productions, including Snow White and the Seven Dwarfs (1937); Dumbo (1941); Alice in Wonderland (1951); and assorted Goofy, Pluto, and Donald Duck cartoons, in addition to non-Disney efforts like “The Simpsons,” are displayed by Weebo to relay specific points and moods. For example, when Brainard asks Weebo to stay away from the Flubber while he is out, the robot seemingly agrees by showing a clip of Donald Duck under a halo; moments later, however, this image changes to one of a devilish Donald Duck. Weebo is practicing the robotic version of crossing one’s fingers behind his or her back while making a promise. 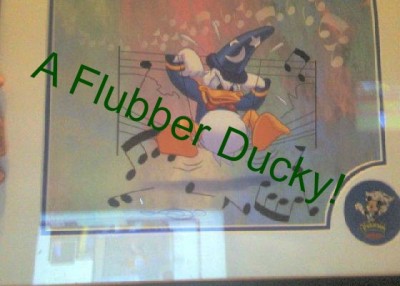 Compared to Alonzo Hawk’s domineering persona in the original, Chester Hoenicker is a caricature, lacking seriousness and delegating his dirty work to a pair of henchmen, Wesson (Ted Levine) and Smith (Clancy Brown). This venal duo is integral to the film’s humor, but you are unlikely to develop any pronounced hatred for the pair.

Also, Wilson Croft is a greater villain than Shelby Ashton was in The Absent-Minded Professor, but he is not developed enough to elicit an angrier reaction from viewers. Croft and Ashton are both overt caricatures, the former more so.

A noticeable theme in The Absent-Minded Professor and Son of Flubber, governmental ineptitude does not play a role in Flubber. The problems here are caused by crooked individuals.

Though it is not a major aspect of Flubber, music occasionally augments the action. A swift, suspenseful tune accompanies the opening credits, for example, and a Latin number amplifies the first car flight scene.

With bizarre antics, awkward caricatures, and frequent puns, Flubber is often hilarious. For better or worse, it exudes a much sillier vibe than The Absent-Minded Professor.

After an entertaining circus performance, Professor Brainard secures flying Flubber in a baseball mitt. Unfortunately, the third out had already been made when Brainard missed his wedding for the third consecutive time.

A random child is frequently treated to, or tortured by, seemingly supernatural sights.

Wesson and Smith survive attacks from Flubberized golf and bowling balls and struggle to interpret instructions from Hoenicker. The final battle scene, involving all of the film’s major players, is hysterical with various types of humor, including puns and rapid digestion.

Being a remake of The Absent-Minded Professor, Flubber was the first of two remakes based off classic Fred MacMurray Disney films. The Shaggy Dog (2006), a remake of the 1959 movie of the same name, was the other.

Nancy Olson, who played Professor Ned Brainard’s fiancé and then wife, Betsy, in The Absent-Minded Professor and Son of Flubber, makes a cameo as the secretary at the Ford Motor Company. (6)

Robin Williams had cemented his place in Disney lore by the time of Flubber’s release because of his legendary portrayal of the Genie in Aladdin. Williams reprised this role in the direct-to-video Aladdin and the King of Thieves (1996). Williams was named a Disney Legend in 2009. (7)

Flubber was the second Disney movie in 1997 to heavily incorporate basketball, after Air Bud.

Professor Philip Brainard is featured in a photograph in the queue of Epcot’s “Journey into Imagination with Figment.” The photograph commemorates Brainard’s fictitious winning of the “Imagination Institute Inventor of the Year Award.”

Also in the queue of Journey into Imagination with Figment, guests can view a replica of Weebo.

If you enjoyed watching Professor Brainard fly his car upside down before freefalling, be sure to check out “Rock ‘n’ Roller Coaster Starring Aerosmith” and “The Twilight Zone Tower of Terror.” These attractions, a looping roller coaster with limousine-themed cars and an elaborate drop tower, respectively, are situated at the end of Sunset Boulevard at Walt Disney World’s Disney’s Hollywood Studios.

The effort to amalgamate aspects of The Absent-Minded Professor with new concepts in Flubber resulted in an erratic story.  Flubber’s plot development is subservient to the antics of individual scenes, but the film is nonetheless fun.

What do you think of Flubber? Let me know in the comments!

Sponsored Ad:  Would you like to help support The Mouse For Less website in continuing their mission of being THE Disney vacation planning resource?  You can do so by purchasing Flubber from our Affiliate Link through Amazon. Thanks so much for your support!