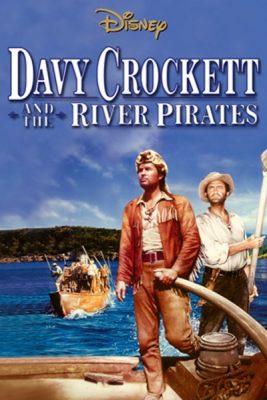 A prequel to Davy Crockett, King of the Wild Frontier (1955), Davy Crockett and the River Pirates was theatrically released on July 18, 1956. The eighty-one minute film is an edited compilation of the final two episodes of the five-part Davy Crockett miniseries, which aired as part of Walt Disney’s weekly “Disneyland” television show on ABC-TV and fostered one of the greatest fads in American entertainment history. (1)

Beginning with the 1961-62 television season, Walt Disney moved “Disneyland,” now renamed “Walt Disney’s Wonderful World of Color,” from ABC-TV to NBC-TV because of the latter network’s greater interest in color television productions. (4) As such, a September 12, 1964 airing of Davy Crockett and the River Pirates in the weekly Sunday 7:30-8:30 PM “Wonderful World of Color” window on New York City’s NBC affiliate, WNBC-TV, was in color. (5)

King of the Wild Frontier has a sturdier historical backing than River Pirates. Sans the major events, including the Creek War, state and national politics, and the Alamo, that structured King of the Wild Frontier, Davy Crockett and the River Pirates is more tangential in nature (6), and Disney admits as much over the opening credits in the lyrics to “The Ballad of Davy Crockett”: “History remembers the name of his gun and some of the deeds he really done, but most of his chores for freedom and fun got turned into legends, and this here is one!”

The film’s questionable overall accuracy notwithstanding, historical facts, such as the importance of New Orleans as a trading center and the names of specific towns and Native American tribes, are presented in Davy Crockett and the River Pirates.

The boat race between Crockett and Fink commences in the town of Maysville, Kentucky.

In 1830, twenty years after the setting of the film, President Andrew Jackson, who played a major role in King of the Wild Frontier, vetoed the Maysville Road Bill, which would have provided federal funding for the construction of a road between Maysville and Lexington, Kentucky. Jackson issued the veto under the strict-constructionist logic that because the entirety of the proposed project was situated within a single state, rather than among multiple states, the national government lacked constitutional authority to intervene. Jackson’s opponents, conversely, argued for the constitutionality of the proposed funding under the loose-constructionist logic that the road was a component of a larger national transportation project. Crockett, having bitterly broken with Jackson, fell into the latter camp and was among the Congressional Representatives who unsuccessfully voted to override Jackson’s veto.  The vote came only a month after Crockett’s speech against the Indian Removal Act, which was depicted in King of the Wild Frontier. (7)

By keeping his word to others regardless of the circumstances, Crockett personifies honor. Crockett is truthful to Fink concerning the race stakes in the first half of the film and to the Chickasaw and Kaskaskia Indians regarding his intent to locate the troublesome woodsmen in the second half of the film.

Action scenes are incorporated throughout Davy Crockett and the River Pirates.

In the first segment of the film, punches and kicks are thrown on the streets of Maysville; a shootout with Indians, or frontiersmen disguised as Indians, occurs on the Ohio River; a brawl erupts in a New Madrid tavern after Crockett demonstrates a perfect shot; and the respective crews engage in a final battle at the finish line in New Orleans.

The second half of the movie features an extended battle between Crockett’s crew and the pirates on the river, where everything within reach, including guns, tomahawks, bare fists, barrels, frying pans, and dynamite, is used as a weapon. Crockett and Russel, with still greater intensity, proceed to fight the pirates’ leaders in a cave.

The soundtrack of Davy Crockett and the River Pirates is excellent. My opinion on this matter was secured by the fact that the unforgettable “Ballad of Davy Crockett” was retained from King of the Wild Frontier, but several catchy new songs are also present. Among these additions, “King of the River” is essentially a theme song for Fink, highlighting the character’s arrogance. The song is first heard when Crockett, Russel, and Fink meet at Maysville and is reprised as the keelboats race down the Ohio River. “The Ballad of Davy Crockett” is reprised immediately after the second “King of the River” rendition, a pleasant juxtaposition.

The second half of the movie adds a banjo-playing peddler, Colonel Plug (Walter Catlett), who is lacking in morals but not in musical ability. Plug commences the song “Yaller Gold,” a ballad that alerts the river pirates to a trove of gold that may or may not be aboard Fink’s boat. “Yaller Gold” is superior to “King of the River,” in my opinion, though that’s not a knock on the latter.

In addition to the film’s great lyrical music is solid background music. These tunes add suspense and drama where appropriate, the best insertion coming as Crockett passes Fink on the river after the former’s boat had been mischievously redirected down a rough stretch of the Ohio River by the latter’s crew. The music abruptly shifts from tranquil to eerie, an alteration seemingly out of “The Twilight Zone,” as Crockett comes within Fink’s view—perfection.

Davy Crockett and the River Pirates is funnier than its predecessor, perhaps because the stories are more legendary than historical.

While trekking through the Kentucky wilderness with Crockett, Russel encounters some problems with nature. Ants the size of alligators bite him, squirrels gleefully drop debris into his beverage, and a skunk casually strolls past him. Russel, unfortunately for his olfactory glands, decides to hit the sack at the same time as the skunk.

Mike Fink is not exactly humble. He claims the ability to “outrun, outjump, out eat, outfight…and outtalk” everybody, including Crockett. The “King of the River” also does an adequate banker impersonation.

Crockett and the rest of his crew are happy to help a man stranded on an island in the middle of the river…they just wish that he didn’t insist on bringing along more animals than were present on Noah’s Ark. At least the critters don’t have to board two by two.

Walt Disney continued his string of United States-history based films the following year with Johnny Tremain, which is set in Boston in the years prior to the outbreak of the American Revolution.

Animals also board a vessel en masse, this time in two-by-two fashion, in the Noah’s Ark segment of Fantasia 2000.

In Critter Country at California’s Disneyland Park, guests can explore the Rivers of America on “Davy Crockett’s Explorer Canoes.”

Guests were able to ride “Mike Fink’s Keel Boats” at Disneyland from 1955 to 1997 and at Walt Disney World’s Magic Kingdom from 1971 to 2001. The names of both Fink’s keelboat from the movie, “Gullywhumper,” and Crockett’s vessel from the film, “Bertha Mae,” also served as the names of the theme park keelboats. (8) 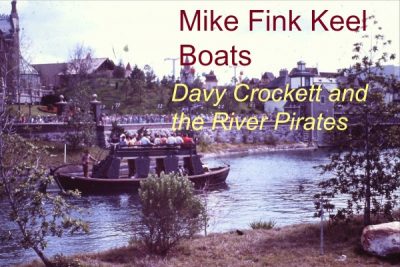 The plot of Davy Crockett and the River Pirates is more contrived than that of its predecessor, but it is no less entertaining. The music is great, you are guaranteed a few laughs, and action abounds.

What do you think of Davy Crockett and the River Pirates? Let me know in the comments!

Sponsored Ad:  Would you like to help support The Mouse For Less website in continuing their mission of being THE Disney vacation planning resource?  You can do so by purchasing Davy Crockett and the River Pirates from our Affiliate Link through Amazon. Thanks so much for your support!