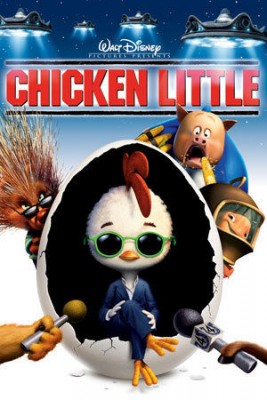 Chicken Little was theatrically released as the forty-sixth full length animated feature in Disney history on November 4, 2005. It is based on the fable of the same name and clocks in at 81 minutes.

The film was released amidst immense pressure for Disney, as a poor reception could have destroyed the company’s chances to acquire Pixar. (1) As it turned out, the film was generally well received by moviegoers despite mediocre reviews from critics. (2)

Animator Glen Keane proved essential in Disney’s transition to computer animation. Infuriated in February 2003 when his proposal for “Rapunzel Unbraided,” the eventual Tangled (2010), was only approved with the caveat that it be computer animated, Keane acquiesced on a new challenge. Animation president David Stanton said to Keane, “Glen, I’m not asking you to go make a movie with humans that look like ‘Final Fantasy.’ I‘m asking that you—and I know it doesn’t exist out there—I’m asking you to create it. You have to create something new.” (4)

Seemingly more enthusiastic, Keane responded that while he “loved” DreamWorks’ Shrek (2001), he deemed the animation of that film terrible. (5) Perhaps Disney could become the best in a new medium. The company’s namesake, after all, had always embraced new ventures.

With Keane onboard, Disney’s de-emphasis of hand drawn animation became easier to implement, though the change was still not overly popular with the animators. (6)

Chicken Little was also the first animated feature in Disney history to be released to theatres in 3-D, and on very short notice. Disney first consulted George Lucas’s “Industrial Light & Magic” about a possible 3-D conversion of the film in March 2005 and managed to convince the skeptical company to, successfully, attempt the process. (7) 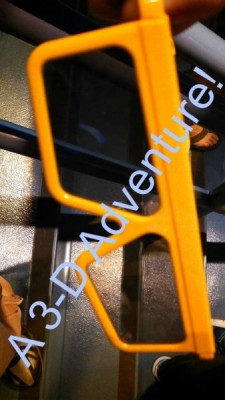 The residents of Oakey Oaks are excited for an upcoming movie, “Crazy Little Chicken,” which is based on a true incident. Unfortunately for the Cluck family—Chicken Little and his widower father, Buck Cluck—this flick is not endearing. You see, a year earlier, Chicken Little alerted the town that the sky was falling with no evidence to prove his contention. Mr. Cluck, a local hero because of his stellar high school baseball career, is especially humiliated and subconsciously loses faith in his son.

Chicken Little wants more than anything to impress his father. He joins the school baseball team, and despite not playing all season, he miraculously wins the pennant for Oakey Oaks with a pinch hit inside-the-park home run. His father is indeed now proud of him but only for the moment. When Chicken Little and his best friends, Abby, Runt, and Fish, proclaim an alien invasion later that night, the town and Mr. Cluck turn their backs on the new baseball hero. Can Chicken Little prove he is not crying wolf?

When a child is troubled, it is often better for said child to discuss the problem with a parent than to remain silent on the issue. The title character in this flick encounters such a situation, when he feels his father does not support him, yet Chicken Little struggles to actually tell his father.

Mr. Cluck clearly loves his son; he is just ignorant of the situation. Communication in this case would have likely solved the problem quickly.

The plot of Chicken Little is not perfect, and I have some questions based on ambiguities.

First, is Chicken Little in middle school or high school? The evidence, especially the excitement surrounding the baseball game, would indicate the latter, but a sign in the gym during the dodgeball scene reads “middle school.”

Second, why was the baseball announcer so melancholy when it was initially thought that Chicken Little was out at the plate? Even if the run had not been awarded, the tying run had scored on the hit, so the game was not lost. I guess it was assumed that the on-deck hitter, the team’s best player, Foxy Loxy, would have driven in the winning run.

Finally, was Chicken Little planning to attend Abby’s karaoke party on the evening of the game? She was clearly expecting him, but the title character was late, and Mr. Cluck had already wished his son goodnight.

In a word, Chicken Little’s soundtrack is “interesting.” I found the original songs, including the fast paced country tune “One Little Slip,” mediocre and forgettable, but I enjoyed the inclusion of popular music. Throughout the course of the movie and the end credits, notable songs, including “Ain’t No Mountain High Enough,” “Don’t Go Breaking My Heart,” “We are the Champions,” “I Will Survive,” “Stayin’ Alive,” and “It’s Too Late,” are incorporated either as vocal music or bizarre poetry.

The utilization of “Ain’t No Mountain High Enough” in the final scene perfectly concludes the movie.

Chicken Little is consistently funny and downright hilarious at points.

The two funniest characters, in my opinion, are Runt the pig and Mayor Turkey Lurkey. The former sings, dances, and plays thesaurus, while the latter makes his decisions from cue cards and puts pennies ahead of his official duties.

The Aliens have arrived! They have not come for tic tacs, the key to the city, or a trip to the mall. They seem to enjoy Disney merchandise, though.

Chicken Little may be a baseball champion, but he is not winning American Idol.

Pop culture references are inserted throughout the movie. Baseball for Dummies makes an appearance as do numerous movies and movie franchises, including Star Wars (1977 et al.), Raiders of the Lost Ark (1981 et al.), and The Lion King (1994).

Walt Disney released an approximately nine-minute short of the same name in 1943.

Chicken Little wishes upon a star, following the lead of Geppetto from Pinocchio (1940).

A bell tower was previously featured in The Hunchback of Notre Dame (1996).

Having been featured in the live action sports drama Remember the Titans (2000), “Ain’t No Mountain High Enough” was heard in a Disney movie for the second time in five years.

Baseball was highlighted in the “Casey at the Bat” segment of Make Mine Music (1946).

Chicken Little is consistently entertaining, though the plot has indeed been pulled from outer space.

Clips from previous animated and live action films, most notably Raiders of the Lost Ark and The Lion King, are inserted, though.

What do you think of Chicken Little? Let me know in the comments!

Sponsored Ad:  Would you like to help support The Mouse For Less website in continuing their mission of being THE Disney vacation planning resource?  You can do so by purchasing Chicken Little from our Affiliate Link through Amazon. Thanks so much for your support!