Based on Jeanne-Marie Leprince de Beaumont’s 18th century French fairy tale of the same name, Beauty and the Beast was released as the 30th full-length animated feature in Disney history on November 22, 1991. The 91-minute flick was theatrically re-released in 3D in January 2012.

Beauty and the Beast. The former character, appropriately named Belle, is a beautiful and compassionate, albeit eccentric, young woman. She may not fit in with the crowd, but her looks are attractive to male suitors, most notably the popular Gaston.

The Beast, conversely, is a hideous brute of a creature. He used to be a handsome prince, but his entitled personality caused a traveler to place a spell over his castle and its inhabitants. If he doesn’t find reciprocated love by his twenty-first birthday, he will remain a beast forever. He wants to redeem himself, but time is running out, and hope is essentially lost. After all, nobody could love a creature like him. Right?

The old saying “don’t judge a book by its cover” implies that quality is often found beneath the surface. Such is the case in Beauty and the Beast. Belle may be both beautiful and kindhearted, but the two qualities don’t coexist in everyone. Gaston’s vile personality is shielded by his good looks, while the Beast’s hideous exterior masks his potentially caring heart.

Gaston is conceited and arrogant. In the vein of a passionate mob leader, he excites the townspeople to kill the Beast so that Gaston can marry Belle.

The Beast’s initial actions toward Belle and her father, Maurice, would hardly be excusable in a real-world setting, but they can be forgiven in a Disney movie. On this note, the Beast demonstrates selflessness by allowing Belle to leave the castle to rescue her father in spite of the fact that Belle is his last hope to break the curse. He may have to remain a beast forever, but Belle showed concern for him, gave him a chance, and his own fate is secondary to her happiness as a result.

The Beast meets greater success in winning Belle’s trust through his actions than his words. A half-hearted “please” didn’t convince Belle to come to dinner, but fighting a pack of angry wolves to save her life altered the course of the relationship.

Belle is an independent woman. She reads frequently and is not afraid to speak her mind. Belle shuns Gaston numerous times and holds her own in a heated debate with the Beast over who was at fault for the latter’s injury, suffered from fighting the wolves.

Chip Potts, the son of Mrs. Potts, demonstrates childhood innocence. He asks questions, most of which his mother is afraid to answer, and is willing to take risks, such as secretly departing the castle with Belle to find out why she left. His actions and personality are in sharp contrast to those of the Beast, who has resigned himself to eternal misery. Chip is young and ignorant about the world’s vices, while the Beast has been corrupted by society.

What happened to the king and queen? Was the prince an orphan, and if not, who raised him?

Was Chip born as a human or as a teacup? The spell has existed for ten years, and he seems rather young.

Why did the Beast attempt to save Belle from the wolves? Did he love her at that point, or did he just want to bring her back as a prisoner? In any event, he made the right decision.

Beauty and the Beast excels at manipulating a viewer’s emotions. The situations surrounding Belle’s relationships with her father and, later, the Beast are often tear-inducing, and the caustic demeanor of Gaston will likely evoke rage. Gaston is a pure bully.

With the possible exception of The Hunchback of Notre Dame (1996), Beauty and the Beast is the darkest movie from the Disney Renaissance period (1989-99). Humor is intermittently inserted, but it’s subtle.

The interactions between the enchanted candlestick, Lumière, and his clock counterpart, Cogsworth, are also entertaining. Lumiere is optimistic and whimsical, while Cogsworth is conservative and serious. The latter is hesitant to take risks that the former embraces, leading to tension.

Beauty and the Beast’s soundtrack is excellent. The numbers, alternatively upbeat and soothing, are catchy and seamlessly aid the story.

The song “Belle,” which is performed by the townspeople, showcases the title character’s awkward demeanor and Gaston’s desire to marry her. Belle is so captivated by the book she is reading that she is oblivious to the people badmouthing her behind her back.

Probably my favorite song in the movie, “Something There” utilizes the same tune as “Belle” to demonstrate the evolving feelings between Belle and the Beast.

“Be Our Guest” is an upbeat number initiated by Lumiere at dinner. The lyrics showcase the servants’ joy at entertaining a prisoner…err, guest… after ten years of inactivity. The visuals during this segment are abstract with numerous dancing utensils.

Beauty and the Beast’s only mediocre song, in my opinion, is “Human Again.” This drab number involves the Beast’s enchanted counterparts dreaming of the spell perishing and their transforming back into humans. On a positive note, the song culminates in Splashtacular fashion! (Ed. Note:  “Human Again” was originally cut from the 1991 version. It was only re-introduced when it was included in the 1994 theatrical version and therefore brought back beginning in the 2002 DVD release of the film.)

At the beginning of the film, Belle tells the baker that she just finished a book featuring a beanstalk. Fun and Fancy Free (1947) contains a short called “Mickey and the Beanstalk.”

The Hunchback of Notre Dame is relatable to Beauty and the Beast in several ways. First, Belle makes a cameo in the streets of Paris during Quasimodo’s rendition of “Out There.” Secondly, Quasimodo, like the Beast, must fight a peculiar exterior to win love. Finally, both flicks feature a conclusive battle scene atop a tower.

If the flick made you hungry for French pastries, check out “Les Halles Boulangerie & Patisserie” in Epcot’s France pavilion. Guests can also meet Belle at the France pavilion.

Beast’s Castle in the Magic Kingdom’s Fantasyland houses the “Be Our Guest Restaurant.” This eatery offers counter-service dining at lunch and full-service dining at dinner. Beer and wine are available at the latter meal, in addition to the “Grey Stuff” dessert, which Belle enjoyed during the rendition of “Be Our Guest” in the movie. There are a few different ways to enjoy the “Grey Stuff”.  The traditional “Grey Stuff” served by itself on a plate is typically only available at dinner for guests celebrating something. In addition, at lunch, there is the option to purchase “The Master’s Cupcake” which is a chocolate sponge cake cupcake that includes the “Grey Stuff”.  At dinner, there is the “Grey Stuff” option, which is a chocolate shell, cookie crème topped the“Grey Stuff”  At the restaurant, diners can also interact with the Beast only during dinner. 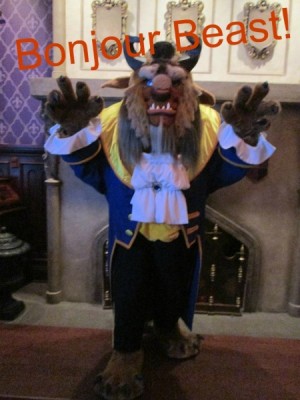 Also in Fantasyland, children and adults alike can participate in a reenactment of Beauty and the Beast amongst Belle and animatronics in “Enchanted Tales with Belle.”

With great music, a well-developed plot, and engaging characters, Beauty and the Beast is a Disney masterpiece.

What do you think of Beauty and the Beast? Let me know in the comments!

Sponsored Ad:  Would you like to help support The Mouse For Less website in continuing their mission of being THE Disney vacation planning resource?  You can do so by purchasing Beauty and the Beast from our Affiliate Link through Amazon. Thanks so much for your support!