Based on Washington Irving’s 1820 short story “The Legend of Sleepy Hollow” and Kenneth Grahame’s 1908 novel The Wind in the Willows, The Adventures of Ichabod and Mr. Toad was theatrically released on October 5, 1949 as the 11th full-length animated feature in Disney history. The 68-minute flick culminated a string of six consecutive package films released by Disney.

The two segments have since been released separately as “The Legend of Sleepy Hollow” and “The Wind in the Willows,” respectively.

The package films incorporated multiple animated shorts based around a common theme, in this case literature, instead of a single plot-based story. Since the release of The Adventures of Ichabod and Mr. Toad, Disney has produced only one additional package film: The Many Adventures of Winnie the Pooh (1977).

In contrast to the title, the first half of The Adventures of Ichabod and Mr. Toad is the Mr. Toad segment. It is narrated by Basil Rathbone, who is perhaps best known for his portrayal of Sherlock Holmes in several mystery films.

The Ichabod segment comprises the latter half of the flick and is narrated by Bing Crosby.

The segments are connected by a bookshelf. This transition definitely wasn’t Walt Disney’s most creative idea, but it suffices.

In the Mr. Toad segment, J. Thaddeus Toad is enduring financial problems. His friends, Mole, Water Rat, and Angus MacBadger, understand the severity of the situation, but Mr. Toad doesn’t care. Rather, he buys a gypsy cart and a horse named Cyril Proudbottom, and he trades his valuable estate, Toad Hall, to a barman named Winkie for a motorcar.

Unfortunately for Toad, the motorcar had been stolen by Winkie and his gang of Weasels. Somebody has to pay a debt to society, and that somebody turns out to be Toad. He’s innocent, but nobody believes his story. Will justice eventually prevail?

The Sleepy Hollow portion is a tale of love and horror. Brom Bones, the town bully, especially hates the new schoolmaster, Ichabod Crane, and this disdain intensifies when a beautiful and wealthy young woman named Katrina Van Tassel emerges. Bones soon realizes that his only chance of charming Katrina is to somehow eliminate Crane; he tells the superstitious schoolmaster the legend of the Headless Horseman in hope of achieving this end.

Friendship is a key theme in the Mr. Toad segment. Mole, Rat, and MacBadger may be tough on Toad, but unlike the sleazy Winkie, they have Toad’s best interests in mind. Most notably, MacBadger works tirelessly and with little appreciation to help his amphibian buddy.

I question whether Crane truly loves Katrina. Crane acts kindly towards her, but he also admits that he is eager to inherit her father’s wealth.

On a related note, I find the interactions between the anthropomorphic animals and humans in “The Wind in the Willows” interesting. There are many humans in the segment, including a postman, the court officials, a conductor, and the police.

I find two scenes in the feature, one in each portion, to be especially well animated. The flight segment in Mr. Toad beautifully captures a dusk sky, and all aspects of the Headless Horseman are dark yet bold. The figure really stands out.

Sound effects are also well utilized. When Toad and Cyril cover their ears to avoid hearing Rat’s finance lecture, the audio from the film correspondingly silences. Also, during Crane’s ride towards Sleepy Hollow through the forest, intermittent sound effects are limited to the horse’s steps, an owl, Crane’s whistle, and the wind. The scarcity of sound creates an eerie and suspenseful scene, which solidly sets the stage for Crane’s encounter with the Headless Horseman.

I think Cyril is the film’s funniest character. The horse makes numerous awkward facial expressions, recites poetry, and impersonates with relative ease. Some of my favorite moments in the film involve Cyril’s diverse wardrobe.

Performed by Eric Blore, the voice of Toad, and J. Pat O’Malley, the voice of Cyril, “Merrily on Our Way (to Nowhere in Particular)” is the main song in the Mr. Toad segment. The lyrics depict Toad’s joyful but directionless life. This fast-paced and upbeat number reminds me of “The Walrus and the Carpenter” from Alice in Wonderland (1951) because O’Malley also sang the latter tune.

Moving to the Sleepy Hollow portion, “Katrina” is a soothing love song.

Bones reminds me of Gaston from Beauty and the Beast (1991) both in appearance and demeanor.

Prior to the Mr. Toad segment, other notable characters from English literature, including King Arthur, Robin Hood, and Oliver Twist, are mentioned. These protagonists respectively formed the basis for The Sword in the Stone (1963), Robin Hood (1973), and Oliver and Company (1988).

Similarly, other famous characters from American literature, such as Pecos Bill, Johnny Appleseed, and Davy Crockett, are mentioned before “The Legend of Sleepy Hollow.” Pecos Bill and Appleseed were the protagonists of two of the shorts in the package film Melody Time (1948), while Crockett was the focus of Disney’s Davy Crockett, King of the Wild Frontier (1955).

At Disneyland Park in California, guests can partake in Toad’s adventures on “Mr. Toad’s Wild Ride.” 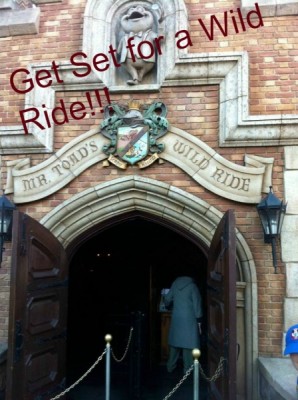 Though Walt Disney World’s version of “Mr. Toad’s Wild Ride” was replaced in 1999 by “The Many Adventures of Winnie the Pooh,” Toad wasn’t completely evicted from his Florida residence. He is shown handing the building deed to Owl from the Pooh franchise in the new attraction.

Guests at Disneyland Paris can enjoy a counter service meal at the “Toad Hall Restaurant.”

Finally, the Headless Horseman is among the highlights of the “Mickey’s ‘Boo-to-You’ Halloween Parade” at Walt Disney World’s “Mickey’s Not-So-Scary Halloween Party.” This hard-ticket party, which requires a separate admission fee, is held at the Magic Kingdom on select nights during the weeks prior to Halloween.

Though The Adventures of Ichabod and Mr. Toad is more of a way to integrate shorts than a traditional movie, the two segments are well done with a good mix of music, humor, and story.

What do you think of The Adventures of Ichabod and Mr. Toad? Let me know in a comment!

Sponsored Ad:  Would you like to help support The Mouse For Less website in continuing their mission of being THE Disney vacation planning resource?  You can do so by purchasing The Adventures of Ichabod and Mr. Toad from our affiliate link through Amazon.