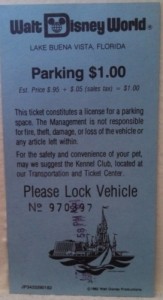 This month is a big one is Disney Parks History. October of 1971 brought us Walt Disney World!!! The Walt Disney World Resort consisted of The Magic Kingdom, the Contemporary Resort, the Polynesian Village, and Fort Wilderness. When the Magic Kingdom gates opened at 10am that day, the first guests were William Windsor, Jr accompanied by his wife, Mary and their two sons, Jay and Lee; the park was dedicated by Roy O. Disney, brother of Walt. Then, exactly 11 years later on October 1, 1982 Walt Disney World expanded as EPCOT Center (later renamed Epcot) opened giving WDW a second park! Epcot was dedicated by Cardon Walker, CEO of Disney.

Here are some other notable October Park History moments:

October 1, 1960 – The Dixieland at Disneyland evening concert show is first held at Disneyland, at the Rivers of American in Fontierland.

October 1, 1999 – The Tapestry of Nations parade premieres in Epcot.

October 2, 1981 – The live stage show Disney World is Your World begins performances on the Tomorrowland Stage in the Magic Kingdom at Walt Disney World.

October 2, 2009 – A ticker-tape parade is held for Buzz Lightyear at the Magic Kingdom in Walt Disney World to celebrate his return from 15 months in the International Space Station. Also appearing in the parade was astronauts Buzz Aldrin and Michael Fincke.

October 3, 2005 – In Disneyland, in the forecourt of Sleeping Beauty Castle, ten of the original cast members of “The Mickey Mouse Club” along with 1,000 “honorary” Mouseketeers form the world’s largest pair of “Mouseketeer ears”.

October 5, 1955 – The Disneyland Hotel opens, on a 60-acre site next to Disneyland. It was the first hotel of bear the Disney name, but was not initially owned by the Disney Company, they would acquire it in 1988.

October 6, 1989 – A new “Disneyland” marquee is installed at Disneyland, replacing the original sign placed there in 1958.

October 14, 1971 – The 20,000 Leagues Under the Sea ride opens in Tomorrowland in the Magic Kingdom at Walt Disney World.

October 15, 1971 – The cover of Life magazine shows 1500 Disney employees and characters in front of Cinderella Castle at Walt Disney World.

October 30, 2010 – The Disney Dream cruise ship is complete and is launched at the Meyer Werft shipyard at Papenburg, Germany.  It can hold a maximum of 4,000 passengers and just shy of 1,500 crew members.