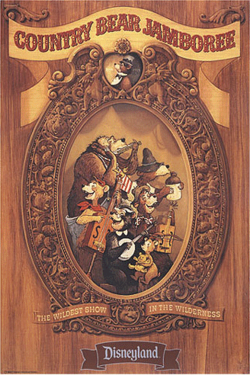 It’s that time again! Let’s look back at Disney Parks history in the month on March. March of 1972 brought an expansion to Disneyland: Bear country! It opened this month bring to the park the Country Bear Jamboree, The Mile Long Bar, Teddi Barra’s Swingin’ Arcade, and Ursus H. Bear’s Outpost. March also brought several other rides to Walt Disney World and Tokyo Disneyland. It also brought us the latest addition to the Disney Cruise Line fleet, the Disney Fantasy.

March 1, 1986 – The Safari Outpost shop opens in Adventureland at Disneyland.

March 3, 1995 – The Indiana Jones Adventure – Temple of the Forbidden Eye attraction officially opens in Adventureland at Disneyland, and opened to the general public the following day. (I actually remember standing in line for this a few months after it opened. The line ran pretty much though most of the park and took several hours to get through.)

March 5, 1983 – The Journey Into Imagination attraction opens in Epcot at Walt Disney World.

March 8, 1986 – The Alice’s Tea Party attraction opens at Tokyo Disneyland. This would be the 3rd Disney Park to get the popular spinning teacup ride and there is currently one in all 5 of the Disney parks/resorts worldwide.

March 15, 1987 – The Pickett Suites Resort hotel opens on Lake Buena Vista at Walt Disney World. After a series of company buyouts it is currently known as the DoubleTree Suites by Hilton Orlando.

March 17, 1999 – The Test Track attraction officially opens to the public in Future World at Epcot. It had an original “soft opening” in December 1998, but experienced several problems and closures before its official opening.

March 17, 2005 – The Buzz LightYear’s AstroBlasters ride officially opens in Tomorrowland at Disneyland following a soft opening the week before.

March 18, 1967 – The Blue Bayou Restaurant opens in New Orleans Square at Disneyland. The Prates of the Caribbean attraction also had a soft opening around this date, but Disney lists the official opening of the ride in April.

March 21, 1975 – The Mission to Mars attraction opened in Tomorrowland at Disneyland.

March 23, 1969 – The first “Herbie Day” was held at Disneyland.  The day’s festivities included a car decorating contest (VW Bugs of course) and the finalists in the contest would be featured in a parade in the park.

March 23, 2003 – The Main Street Electrical Parade in Disneyland Paris makes it final run. Similar versions of this parade still run at the Magic Kingdom at Walt Disney World and in Tokyo Disneyland.

March 26, 1994 – The “Food Rocks” show opens in The Land Pavilion at Epcot. It was designed to be a concert style show that promoted good nutrition.

March 28, 1958 – The #3 Disneyland train, the Fred Gurley, begins operation on the Disneyland Railroad.