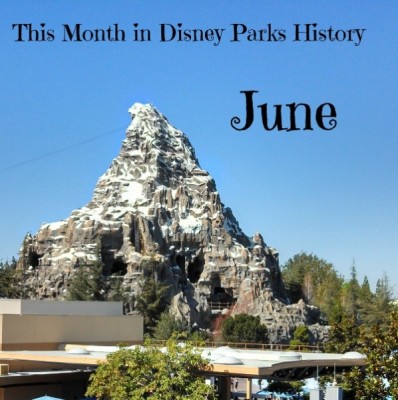 June was a great month for the Disney Parks. It brought the Monorail and The Enchanted Tiki Room to Disneyland, a Space Mountain ride to Disneyland Paris, Alice and Wonderland and the Columbia sailing ship to Disneyland, and brought Walt Disney World a couple of water parks (although one is no longer open). June also brought something that was personal favorite, The Main Street Electrical Parade, to Disneyland.

June 7, 1975 – The Mission to Mars attraction opens in Tomorrowland in the Magic Kingdom at Walt Disney World.

June 11, 2007 – The Finding Nemo Submarine Voyage attraction officially opens to the public in Tomorrowland at Disneyland.

June 14, 1958 – The Sailing Ship Columbia attraction firsts “sets sail” along the Rivers of America in Disneyland. It is a replica of the original Columbia, the first ship to circumnavigate the globe, in 1787.

June 14, 1958 – The Alice in Wonderland attraction officially opens in Fantasyland at Disneyland.

June 14, 1959 – The Disneyland-Alweg Monorail System begins operation in Tomorrowland at Disneyland. It became the first daily operating monorail system in the United States, as well as the entire Western Hemisphere.

June 14, 1959 – The Matterhorn Mountain with its Matterhorn Bobsleds ride opens in Fantasyland at Disneyland. It is the first roller coaster constructed with continuous tubular steel track.

June 16, 1957 – The Holidayland picnic area opens adjacent to Disneyland. It could hold up to 7,000 people for large events and had its own entrance gates to the park.

June 20, 1976 – The River Country Water Park opens at Walt Disney World. It closed in 2001, making it one of only two Disney Parks to close permanently.

June 20, 1995 – The ExtraTERRORestrial Alien Encounter attraction officially opens to the public in Tomorrowland in the Magic Kingdom at Walt Disney World.

June 23, 1956 – The Skyway to Tomorrowland and the Skyway to Fantasyland officially open in Disneyland.

June 29, 1974 – The America Sings show begins running in the Carousel Theater in Tomorrowland at Disneyland.