Welcome to The Mouse For Less Blog, Jenni and Mark!

What value do you place on your memories? A few years back, Disney came out with their Memory Maker package. For our family, this is a summer trip must have. However, this past week we made a long weekend trip to the World for Mickey’s Very Merry Christmas Party. This was our second time at the party, and already knew how amazing this event is for photos. However, we could not justify the cost of $150-$200 for the Memory Maker package since the party was the only opportunity we would have use it (only had tickets for the party). Fortunately, we had heard that Disney has started to offer a hard ticket event Memory Maker deal.

As far as we know, there really isn’t much publicity for this (more on that later), nor did we hear a lot about it on the internet. It was however, the best money we ever spent. With your paid party ticket, you can go to the Magic Kingdom guest services and ask for this special deal. The cost was around $40 before taxes, and works the same as the regular Memory Maker. The only difference is that it is only good for the day of the party. When it comes to Disney, the idea of spending $40 for unlimited professional photos during one of the most magical and amazing events is a deal that we could not pass up. Imagine your family Christmas card with the entire family in front of Cinderella’s Castle covered in Elsa’a ice! 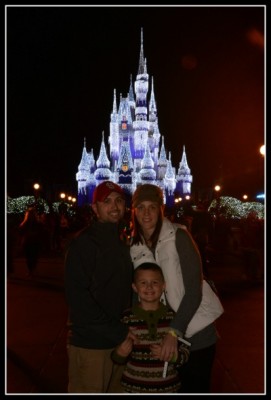 We originally heard about this back during the Mickey’s Not So Scary Halloween Party, but had not heard any confirmation about the deal carrying over to Christmas. The strange thing was that we asked the PhotoPass reps at both the Animal Kingdom Lodge and Art of Animation, but neither representative knew much about this. One even called his supervisor, but still couldn’t find out if the deal was legit. It wasn’t until we got to Magic Kingdom that I found a cast member with knowledge about it. So don’t be discouraged if you ask around but can’t get any answers until you are at the Magic Kingdom. 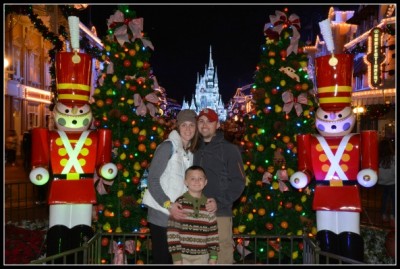 We went on this trip thinking we would gladly download three or four good photos from our time at the Christmas party. When you do the Disney math though, we obviously came way out on top. Instead of spending over $50 to download 4 photos, we got over sixty photos (and the Mine Train video!) Simply put, this was the best money we ever spent in Disney. Who knows, maybe your family will be as lucky as ours and get the perfect picture in front of an iced castle with fireworks blowing off all around! 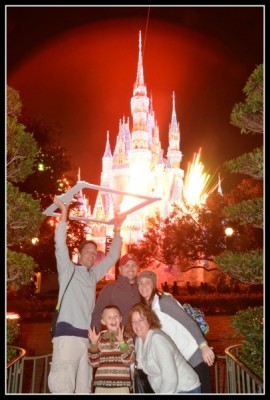