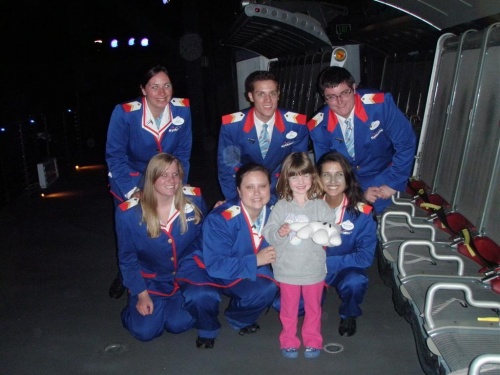 A magical 4th birthday ride on Soarin’! (Submitted by PJ) 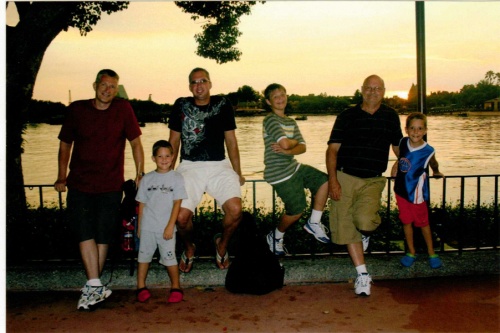 My guys waiting at the lagoon in Epcot for our dinner reservations. This picture of the guys in my family make me smile. Love going to Disney World with them. We are counting the days until we can return to “the happiest place on earth”. (Submitted by LB) 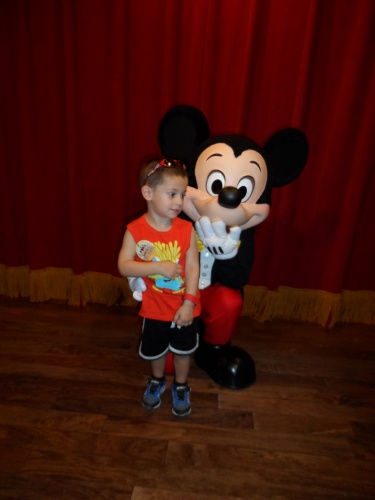 I finally get to meet you Mickey! I waited three whole years. (Submitted by Elizabeth C.) 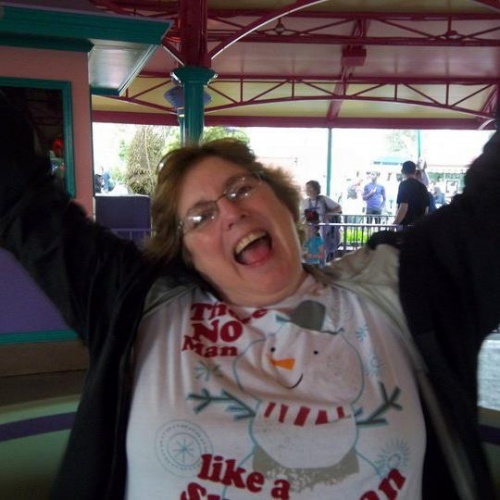 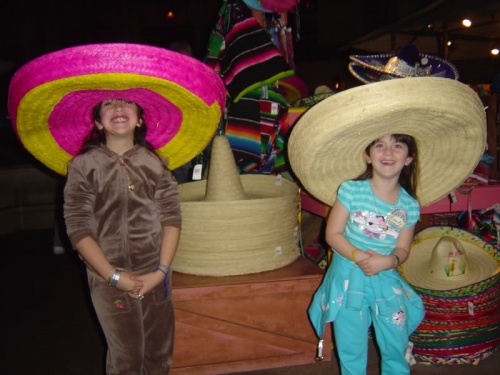 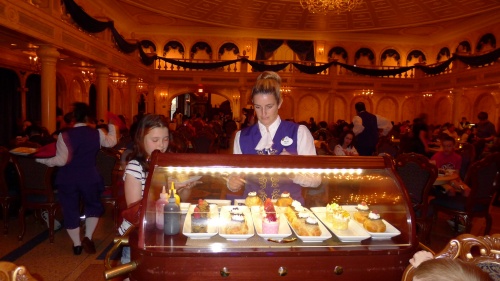 After receiving your recent newsletter and truly enjoying reading Melissa’s review about Be Our Guest Restaurant, I decided to send a picture of my daughter Samantha picking our deserts from the trolley! This was the hardest task she has ever been given as they all looked simply delicious! (Submitted by Sandra C.) 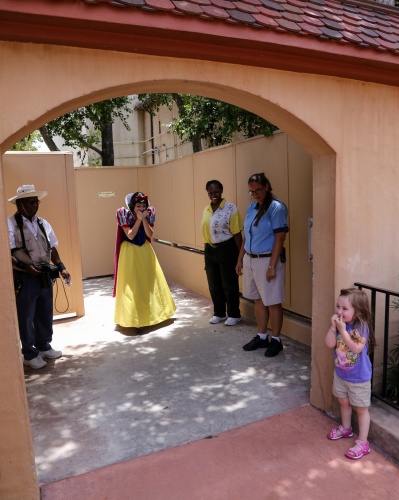 Lila meeting Snow White. This was the best character interaction we’ve ever had. She was smitten! (Submitted by Chrissy D. and Ryan T.) 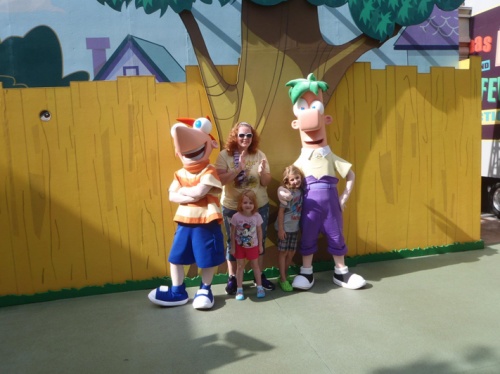 I think I was more excited to meet these guys than they were! (Submitted by Lucy W.) 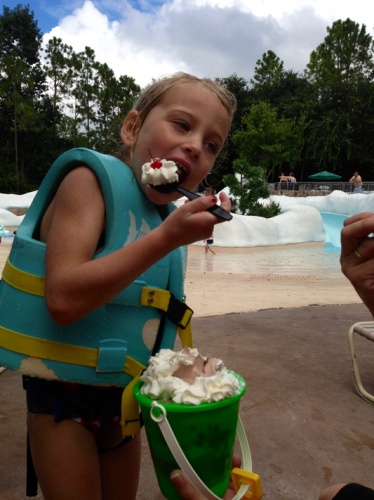 A magical moment is letting a child (in this case my 4 year old niece Lily, who was on her first trip to Disney) eat a bucket, yes a bucket full of ice-cream for lunch while at Blizzard Beach. (Submitted by Jackie S.) 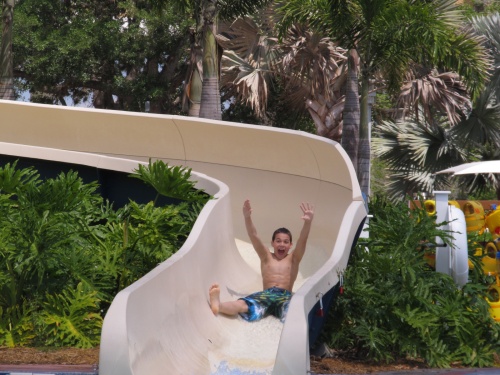 After a long and miserable Pennsylvania winter…my son had a ball at the Contemporary hotel pool. (Submitted by Luann C.) 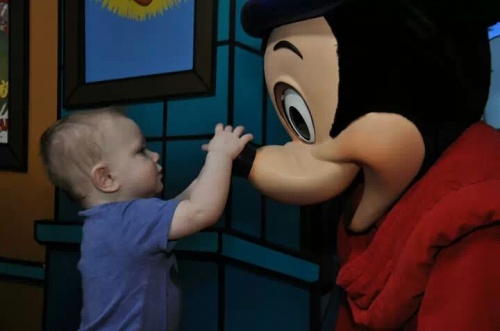 Our baby’s first visit with Mickey! We visited for his first birthday and the entire trip was magical. (Submitted by Phinon W.) 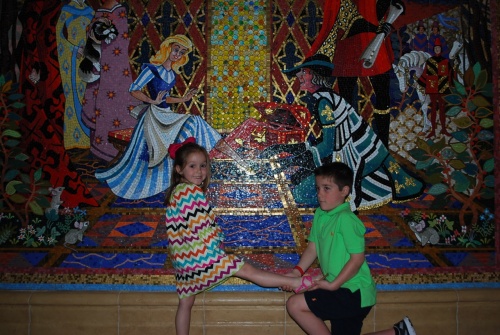 Celebrating our first visit with dinner at the castle. (Submitted by Christie M.) 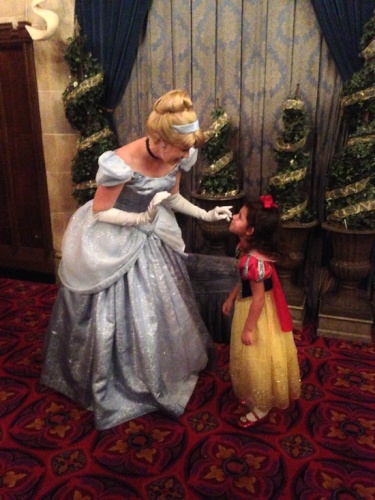 My 4 yr old, Audrina, meeting Cinderella for the first time. She was speechless! (Submitted by Susan M.) 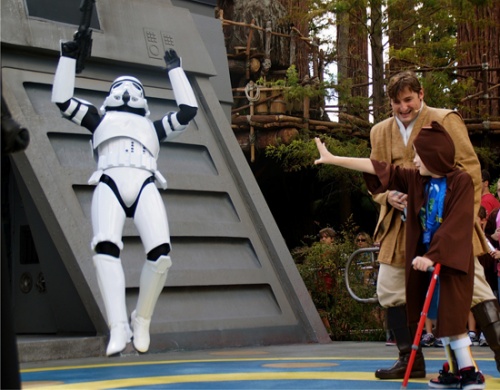 My friend captured this moment during Jedi Training Academy. My son actually thought he mastered the use of the force! (Submitted by Jenni M.) 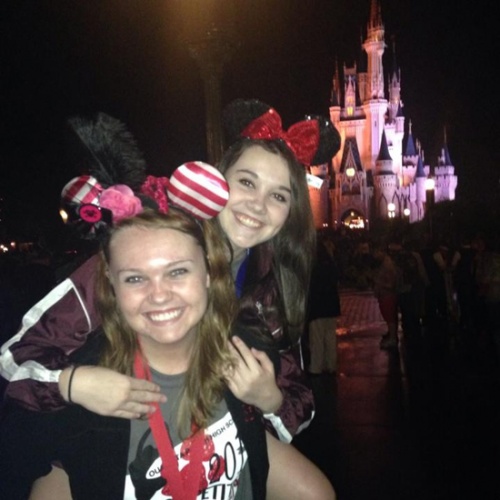 This is one of my favorite memories of my daughters (Lauren and Megan) waiting for the fireworks to start at Magic Kingdom. The fireworks was always a favorite of theirs when they were small and it was sweet to see the kid brought back out in them. (Submitted by Jennifer G.) 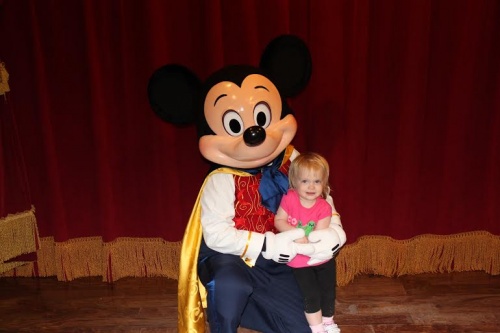 I love you Mickey! (Submitted by Abby S.) 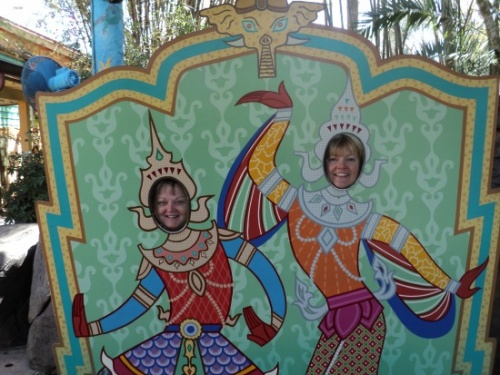 A Disney trip with my cousin and aunt! 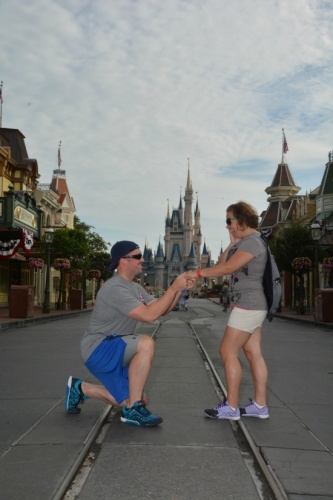 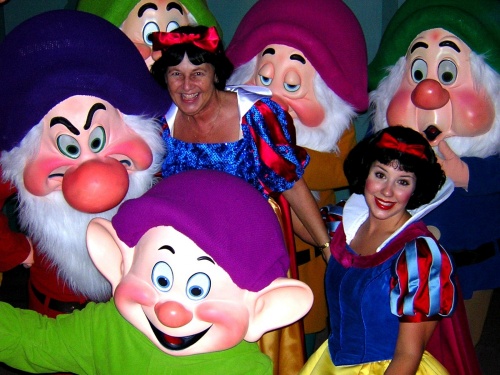 My wife, Judy has been a Snow White fan since she was a little girl and because of her dark hair, was called Snow White by many. One late night at Mickey’s Not-So-Scary Halloween Party we ran into Snow White and the Dwarfs while Judy was wearing her Snow White outfit which she had made. That is one of our favorite memories of our many visits to the Magic Kingdom. (Submitted by Tom G.) 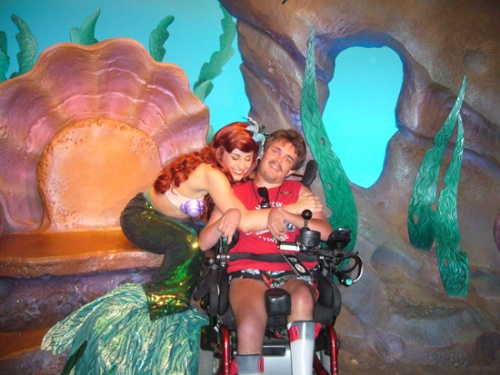 When the New Fantasyland opened in 2012, my son was immediately drawn to Ariel’s Grotto. He went so much that the cast members started to know him by name which made it even more magical for him. There are so many nice people who are friends of Ariel but there immediately became one or two special friends.

As my son is disabled and been in a power chair since first grade, he has come to love the Magic Kingdom as it has created a “safe” environment for him. During 2012, he decided to experiment with independence as much as a wheelchair-bound person can who has limited functionality of his hands. Ariel’s Grotto immediately became his second home. Ariel would greet him by name and make him to feel welcome without Mom and Dad tagging along. We would meet up after two houses of “independence” and he would tell us all about his conversations with Ariel.

On one outing at the park a cast member named Lizzie saw him going around the park on his own and asked him if he would like to spend a day with her. She contacted us by email and we made arrangements. Little known to him even to this day, Lizzie is close friends with Ariel. Arrangements were made and they spent a day touring Ariel’s Grotto, riding her ride and then the rains came and they didn’t get to do anything else together that day.

But, the magic remains due to one cast member’s kindness; Lizzie and Matthew are friends outside of the Grotto, and he always gets a special welcome whenever he is able to find her in Ariel’s Grotto.

As he had to have surgery in September of 2013, the cast member’s got together with another nice friend of Ariel (aka, Libby) and made a special video for him and posted it on his Facebook page. This made recovery from surgery so much nicer for one young man. The post came through the day after his surgery and it was a happy moment to have Ariel give you a personal get well message.

Thanks so much to those who are friends with Ariel that made the life of one young man a happier existence. You never know what your kindness means to someone and we hope that you continue to share your love with all the special needs people who come to your Grotto. (Submitted by Mark and Dora D.) 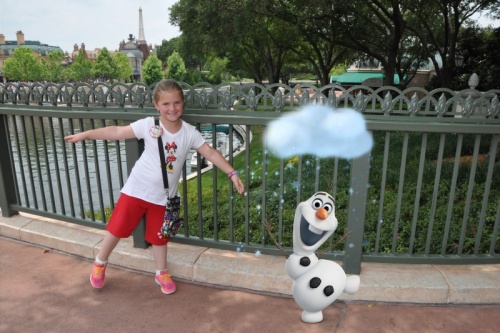 My daughter Mikayla during our trip this past May. She loves Frozen and we were so excited when the Disney photographer offered to add something fun for her in the picture! She was standing on the bridge heading into France in Epcot! (Submitted by Amanda B.) 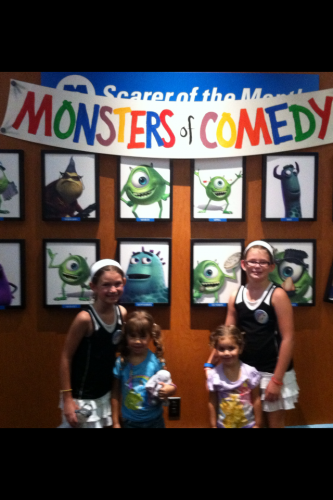 My daughters met up with their cousins at Magic Kingdom and got to have a few laughs at Monsters Inc Laugh Floor. It looks like they’ve become a new set of “Monsters of Comedy”. (l-r, Alexandra, Vicki, Briana and Samantha) (Submitted by Matthew D.) 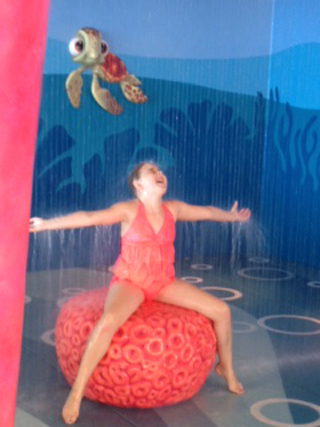 Having fun in Nemo’s Reef on the Disney Dream! (Submitted by Sally D.) 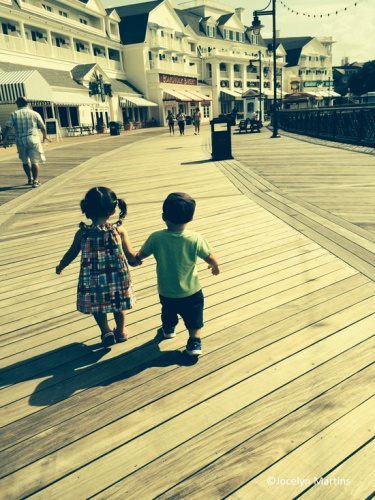 We were lucky enough to spend most of our last trip to Walt Disney World with our best friends. They have two boys and we have three girls. It looks like gender doesn’t matter and the “best friends” theme spans to the next generation. Elliot and Sabrina walking along the Boardwalk. (Submitted by Jocelyn M.) 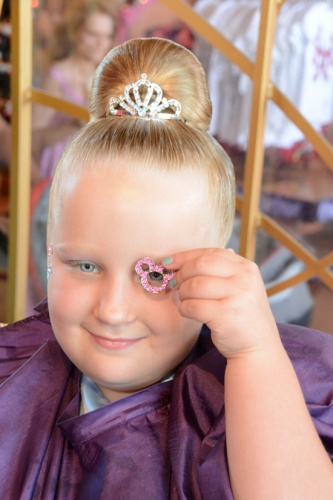 I spy with my little eye…During her very first trip to the Bibbidi Bobbidi Boutique, Princess Emma was chosen to be the Princess in the window at Downtown Disney. (Submitted by Tina F.)