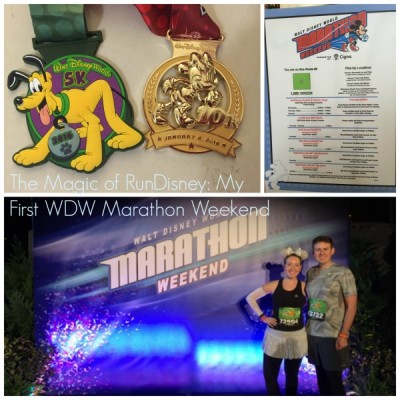 When I began my running journey in January 2015, I started with a goal in mind: running in the Walt Disney World Marathon Weekend 2016. After hearing about the weekend on several podcast episodes and finding out that it was the biggest RunDisney event of the year, I knew I wanted it to be my first race experience. The day registration opened in April, I signed my husband and myself up for both the 5K and the 10K. For brevity’s sake, in this trip report, I will be leaving out all non-race related details.

After months of training and trip planning, our first run-cation finally arrived. We got to Disney’s Boardwalk Inn and Villas on Wednesday morning. Being the biggest runDisney event of the year, every Disney resort was a host resort, so the Boardwalk had clear signage for Walt Disney World Marathon Weekend including hours for the Expo and every race, and information and times for the bus service to the events. 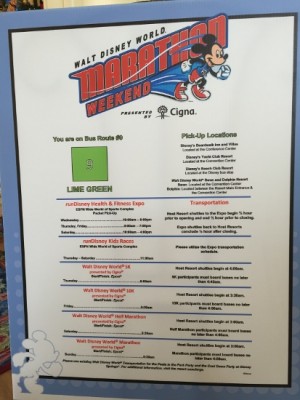 After getting settled into our room, we headed to the Health and Fitness Expo using Disney-provided bus transportation. The Expo was held at the ESPN Wide World of Sports, which neither of us had ever been to. It turned out to be much bigger and different than what we had expected. I had expected for everything (packet pick up, vendors, official runDisney merchandise, etc.) to all be in one huge room/building. Instead, everything was spread out across multiple buildings. Our 5K packet pick up was in one corridor, then we picked up our 5K race shirt in another spot, then we had to head to another building to get our 10K packet, and another building after that to get our 10K race shirt. It wasn’t too confusing, and there were signs everywhere, but I want other newbies like me to have a heads up for future events.

After getting everything squared away, my husband and I checked out a few vendors, and we went inside the official runDisney merchandise area. We aren’t big shoppers, so we left without buying anything. As we were leaving, we saw Jeff Galloway, the official training consultant for runDisney, giving one of his talks. We stopped and watched the rest of the presentation, which was an overview of his Run-Walk-Run program, and general tips for race day such as nutrition, hydration, and clothing choices. 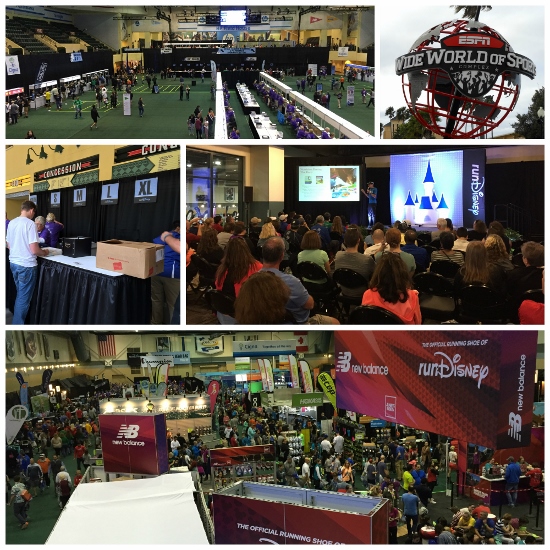 Before we got back on the bus to the BoardWalk, we stopped to get some pictures in front of the race weekend signage! 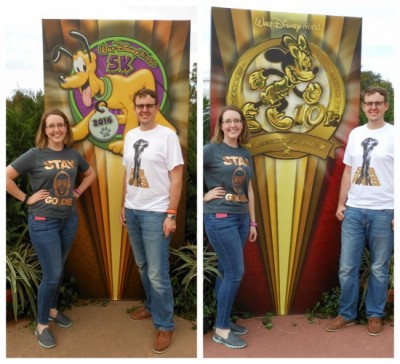 Because we knew that we would be getting up really early the next two days, we chose to have an easy rest of the day at Disney Springs and were in bed by 8:00 p.m.

The morning of the 5K started with us waking up at 3:00 a.m. The number one tip we had heard over and over again for race weekends is to be on the first bus to the race. Being the rule-followers we are, we heeded that advice. We got to the Epcot parking lot at 4:15 a.m. and followed the giant crowd as we walked toward the pre-race area. 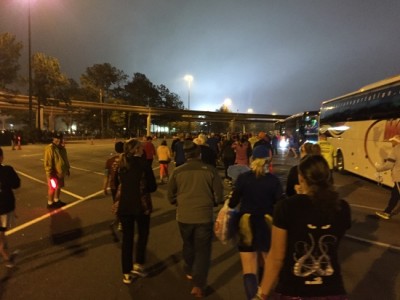 We didn’t have any bags to check, so we bypassed that line, and headed to the warm up area. A heads up for all the newbies out there: as we walked into the pre-race area, there were two small tables selling coffee, but they only took cash. It never occurred to us that we would need to bring cash for anything at Walt Disney World, much less for something at the race.

The pre-race area was a giant open space with a stage in the back with a DJ playing songs, multiple photo-spots with backdrops, and different tents lining the area. We walked around aimlessly for a few minutes and took a picture in front of the marathon weekend backdrop before deciding to go straight to our corral. 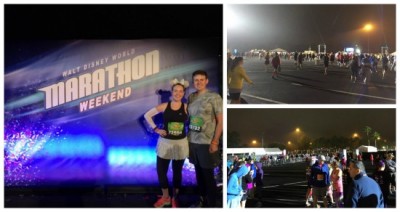 To enter the corral area, we had to show our bibs to the line of volunteers. The entire right side consisted of porta potties, in the middle were hand sanitizer stations and tables of water, and the corrals were on the left side. The corrals were labeled with giant white balloons that had the letter for the corral on them. 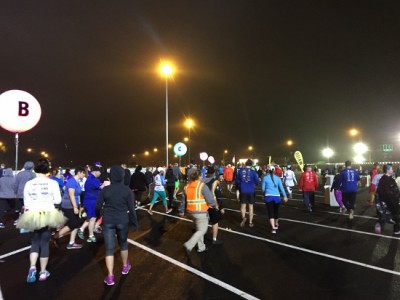 We entered corral D by showing our bibs to the 3 volunteers in front of it. (We were allowed to come and go as we pleased, as long as we showed them our bibs.) By this time, it was 5:00 a.m.  With an hour still to go before the race start, the corrals were empty! 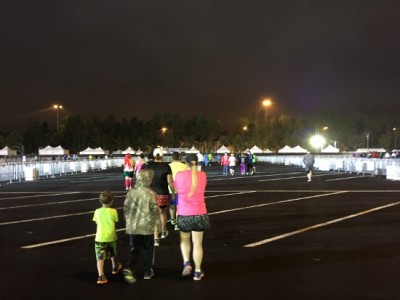 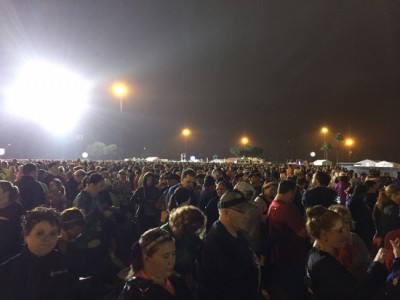 At 5:50 a.m. with 10 minutes to go before the start of the race, the wheelchair racers, the elite runners, and Corral A started walking past us on their way to the starting line. Each corral got their own countdown, fireworks, and race start. As soon as Corral C passed us, our volunteers opened up our gates and we walked very slowly toward the race start, walking past Corral E, Corral F, all the people cheering, and the race announcers. It was surreal being in the very front; I was one of the first people in our corral to cross over the starting line. 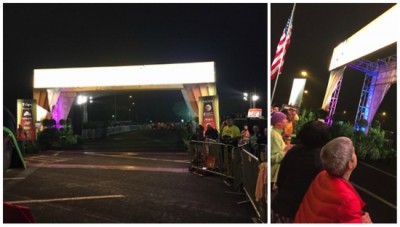 Our part of the race started at 6:25 a.m. With the excitement of it being my first race, combined with the odd feeling that I was inside and outside of Epcot at different times during the course, the race itself is pretty much a blur in my mind. 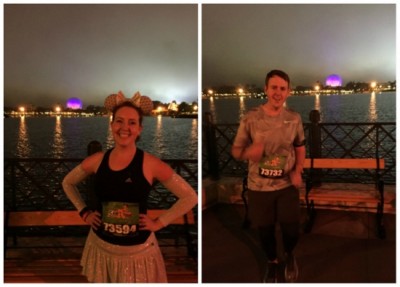 I purchased this photo from the Marathon Foto website. 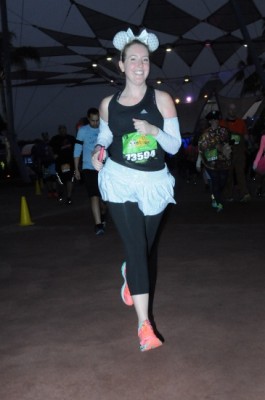 One thing that really surprised me during the race: weaving through all the other runners was more challenging than I had expected. During our training runs at home, we have to pass a couple of walkers, families, and other runners maybe three or four times during the course of a run. At the actual race, we were weaving in and out of thousands upon thousands of other runners and walkers!

Both the 5K and the 10K were more mentally challenging than I was expecting, just because I had to be paying attention at all times during the race. I was always looking ahead at who I would be passing, while also being aware of all the people passing me, because people were running and walking and weaving and bobbing everywhere.

We crossed the finish line at 7:08 a.m. and got our medals from Mike Scopa from the Mickey Miles and More podcast. 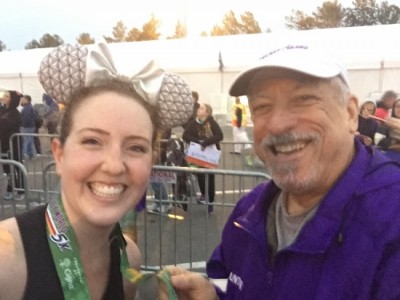 As we kept walking, there were tables lining both sides with volunteers handing out sports drinks and waters. At the end of this walkway, you could choose to go to the right and get your picture taken in front of the finishers photo backdrop or go to the left to bypass it. We chose to get our picture taken. 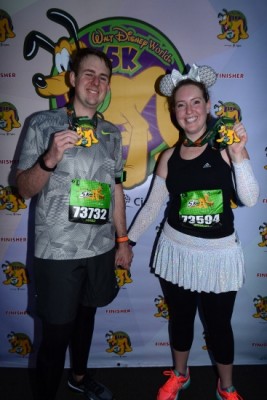 We continued walking, and we came to the tables with bananas and snack boxes. We grabbed ours and walked to the bus stop. The line for our bus was the longest line we experienced during the trip! It consisted of hundreds of people. Amazingly, this didn’t mean we had to wait very long for a bus. Soon after we got in line, 3 buses pulled up for us. 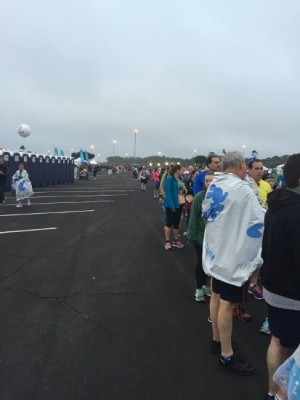 The rest of the day consisted of touring Epcot and Hollywood Studios, spending time at the quiet pool at our hotel, dinner at Kona Cafe at Disney’s Polynesian Village Resort, and drinks at the Belle Vue Lounge back at Disney’s BoardWalk. We were in bed by 8:15 p.m.

We started Day 3 the same way we had started Day 2: with our 3:00 a.m. wake up call. We were on the first bus by 3:37 a.m. and arrived at the race by 4:12 a.m. On this day, we didn’t waste any time walking around aimlessly; we walked straight to our corral, Corral E. We still had over an hour to go until the start of the race, and just like the day before, the corrals were empty.

One thing to note about this race: it rained the entire time! Thankfully, this didn’t bother us. We had trained in all types of weather throughout the year, and had ran in the rain multiple times. We joked that we were actually glad it had rained during one of the races because it validated all of those miserable training runs. 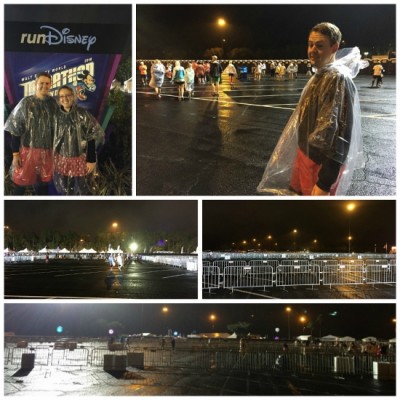 Apart from the rain, the 10K progressed pretty much exactly how the 5K had. We watched as the other corrals passed us on the way to the starting line, and then we were led to the start. Our part of the race started at 6:10 a.m. Again, we were at the very front.

The 10K course was the same as the 5K, except that in the beginning, we ran 2 full miles in the Epcot parking lot and on the highway, and the Epcot resort loop was added in at the end of the course, so we ran past the BoardWalk and Disney’s Yacht and Beach Club Resorts. I tried to take a picture at every mile marker, but I was on the wrong side of the road for Mile 3, so I didn’t get that one.

A few things about the 10K:

1. Because of the rain, a few of the characters were missing from the race, especially in the beginning of the course. We aren’t character people, so this didn’t bother us at all, but I imagine if you runDisney specifically for the characters, it would have been a big letdown.

2. During the highway portion of the race, we came across some hills. My husband and I thought nothing of them because we live in what is known as the “Hill Country” of Texas, so we are used to running them. We heard multiple people having conversations about how they were told by friends there weren’t any big hills on the course, and yet they thought those were some pretty big hills.

3. Running on the BoardWalk in the rain was challenging. The boards were slick, and more than once we saw or heard someone fall down. We chose to walk most of the BoardWalk.

4. If you see a porta potty and you think you may have to go, go! The restrooms were few and far between. 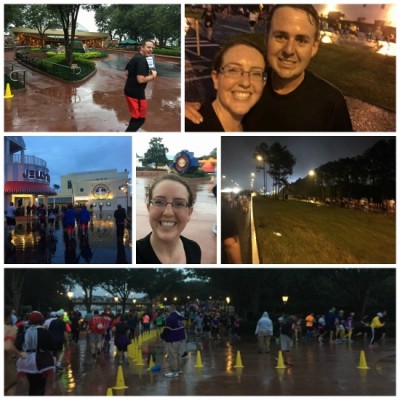 We purchased this next picture from Marathon Foto. I’m glad to have a picture of the both of us running that is not a selfie. 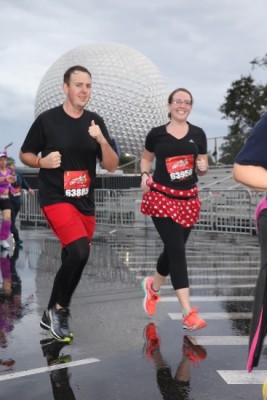 The end of the race concluded the same as it had the previous day. We crossed the finish line, received our medals and our sports drinks, and got a finishers photo. We didn’t have to wait in line for the bus this time, and we hopped right on. Once we got back to the room, I took a picture of both of our medals side by side. 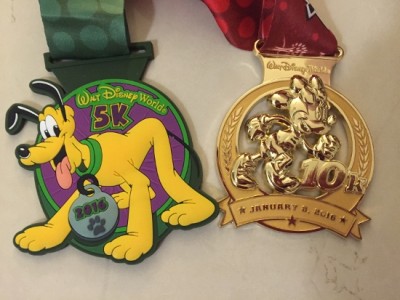 The race part of the trip was over. We were tired and soaked, but overwhelmingly happy and proud of our accomplishments. We had finished our first ever runDisney race weekend!

Have you completed the Walt Disney World Marathon Weekend 5K or 10K? Share your thoughts of your expeirence in the comments!