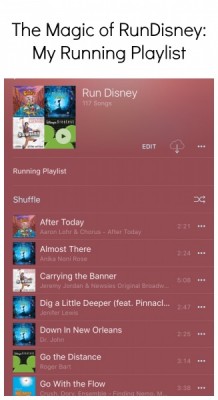 When I first started running, I wanted to do everything I could to keep my mind off of what I was doing. To accomplish this, I listened to podcasts during the first 8 months of my training. Listening to podcasts, and especially Disney and running podcasts, gave me invaluable information about runDisney events and running in general. On one particular episode, I heard Jeff Galloway talking about how listening to music while you run can help you keep a steady pace, and, depending on the song, can give you an even faster pace than you are used to. I had tried running to music a few times before that, but I always found myself getting bored and my mind would start to wander. Nevertheless, the next day I chose to run solely with music, and voila! I saw a definite increase in my pace. I still wasn’t a fan, though. I missed the Disney connection I was getting with my podcasts. That’s when I decided to add in some Disney songs to my playlist, and instantly I was hooked. Anytime a song came on that wasn’t one of my Disney songs, I was a tiny bit disappointed, and I couldn’t wait till another one played. Occasionally I added new songs, and I ran with this playlist from August to January’s Marathon Weekend.

After Marathon Weekend 2016 ended, I wanted to keep the Disney magic alive at home, so I created a new running playlist, consisting only of Disney songs! I love my running playlist now, because every song takes me straight to the theme parks in my mind, or into one of my favorite TV shows or movies. I hope my runDisney playlist contains a few songs that you can add to your own running playlist.

Songs That Take Me To The Disney Parks

Did I miss any songs on your playlist? Have I given you any songs that you might not have considered before? Let me know in the comments!