Where else but at Magic Kingdom could I see and hear all the presidents- we’ll start at the Hall of Presidents and end up at a place Walt Disney held very near and dear Main Street U.S.A..

When I was younger I liked this because it was air conditioned and I could rest for a while. Now, it means more to me. Each time I hear it, I seem to take away something new. Something I didn’t get the time before. I’m not a history buff. I don’t know many of those presidents by name. But I do know that it’s incredible that we can sit and watch and learn from it on the same day we’re having so much fun at the park. That was Walt Disney’s genius.

I feel I may have equal parts of dislike and like for this ride but as a good Disney freak I go on it like I’m supposed to. It drives me a bit mad but I feel guilty if I just say “No, I won’t do it.” It has its good parts. It’s just that song. Maybe if I’m working on that touring plan I talked about I should put this at the end of the day so the song doesn’t haunt us all day! Once again, hunting for Hidden Mickeys will get me through the tough times.

I’ll admit that this is an experience that in the past I’ve walked by as quickly as I could. I was raised that way and never gave it a chance.

This time around we’re trying new things and Country Bears are new to us. I know they are much beloved by many and I hope to add my name to that list soon. It feels like I’m making up for lost time.

Magic Kingdom has a new tour in 2011 called Walt Disney Marceline to Magic Kingdom. It is a walking tour that gives insight into some of Walt Disney’s inspiration starting with his home town. It is a three hour tour and I’m really looking forward to some behind the scenes information. It was the perfect tour for me to pick for us and at about $65 for the two of us it is also very affordable.

I need to find a joke to text in to Monsters Inc. as we are walking in. That would be a fun way to participate. I just DON’T want to be that person they constantly cut back to as comic relief. Maybe I shouldn’t sit by the cameras! I love Laugh Floor. Even if I know how it goes, each time something happens that makes it memorable. And I never, not once, have been with a crowd that couldn’t fill those laugh tanks with energy.

Main Street U.S.A. is such a special part of the park, not only because it’s the first part of the park we enter but also because of how it makes us feel nostalgic for the good old days. It was designed by Walt Disney and I think he knew what he was doing pumping in smells and sounds to help with the emotional reactions. My main street doesn’t look like this anymore but I sure have a part of me that wishes it did. It seems like only good things can happen here. 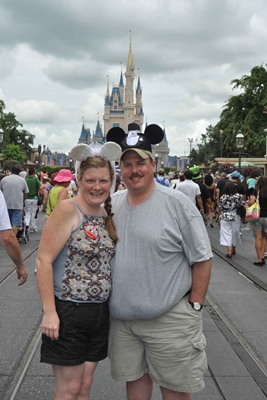 My next entry is filled with good times: space rollercoasters and birds that once sung that will soon sing again. Come back next time to find out more.