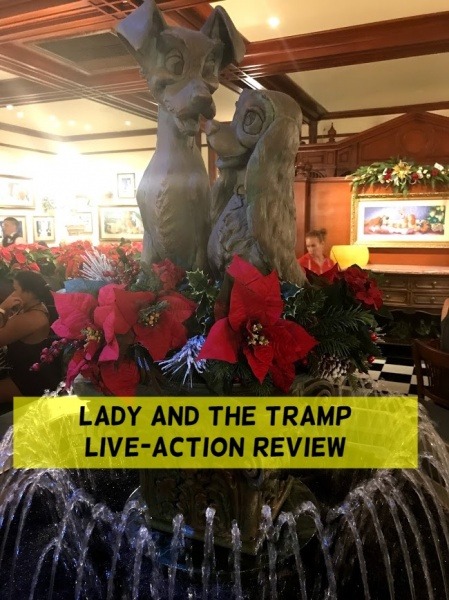 I recently watched the new live-action remake of Lady and The Tramp on Disney+. Before I share my thoughts and impressions, I wanted to give some context. The original Lady and the Tramp from 1955 is my all-time favorite Disney movie. I love the beautiful style of animation, the simple plot, and the playful score that brings these memorable characters to life. I am also a major dog lover, so this film naturally appeals to me.

When the news broke that Disney was making a live-action adaptation of this film, I was equally excited and apprehensive. I always long for more content and a different spin on my favorite stories. However, so much of what makes this movie a favorite of mine would be hard to translate to a live-action format. Needless to say, I was intrigued.

Much to my delight, the opening scene of the movie closely mirrors the original. We are introduced to a sleepy, turn of the century town on Christmas Eve. We see horse-drawn carriages and snow lightly falling, set to the score of an old-timey rendition of “Peace on Earth”. This nostalgic opening scene felt familiar yet fresh at the same time. This is a theme that really carries throughout this adaptation. Disney consciously honors the original story while breathing new life into it to ensure appeals to a modern audience.

The plot follows the original fairly closely, but adds extra scenes and dialogue, contributing an additional 27 minutes to the original. This allows the audience to become better acquainted with the characters and adds additional depth to some of the movie’s themes. This adaptation was a lot funnier than the original, and the characters appear to have more defined, flushed-out personalities.

Jim Dear and Darling, Lady’s owners, are played by Thomas Mann and Kiersey Clemons. In this version, this couple is featured more prominently, and the two do a wonderful job capturing the excitement and wonder of starting a family. Justin Theroux and Tessa Thompson lend their voices to Tramp and Lady, respectively, and add a modern flair and humor to their characters.

The animal actors were adorable and naturally captured the spirit of their original, animated counterparts. When the animals spoke, their mouths moved with the help of CGI. At first, this felt awkward, but I quickly grew accustomed to it. One wonderful aspect of making a dog-focused movie is that dogs are naturally very expressive, as opposed to other animals. Feelings of excitement, sadness, and fear are captured clearly, and these expressions felt natural coming from a dog.

Differences to the Classic

Fans of the 1955 classic will notice a few major differences in this adaptation. The character of Jock, a Scottish terrier and friend of Lady’s was renamed “Jacqueline”. She is introduced as a still life ‘model’ for her eccentric owner’s artistic ventures. Also, Aunt Sarah’s notorious Siamese cats still destroy the Darling’s house, making life difficult for Lady. However, their controversial “Siamese Cat Song” (originally sung by the great Peggy Lee) was replaced with a new title “What a Shame”. This is definitely an improvement as the original song certainly has not aged well.

The dog catcher plays a much more pronounced role as the main antagonist, relentlessly chasing after Tramp throughout the movie. This felt tiresome and, at times, ridiculous. However, I assume this was added to create some additional action and excitement that was missing from the more even-keeled original. I am happy to report that the spaghetti and meatballs scene was indeed featured in this remake. It is every bit as magical as the original, and perhaps more so?

This film also introduced a new, subtle theme with this iteration: homeless pet adoption. Throughout the movie, street dogs Peg and Bull are in and out of the pound and have no real intention of finding  families. They’re often shown stealing scraps for their next meal and living on the streets. By the end, these two street dogs are shown happily adopted by a loving owner. We also are given a glimpse of Tramp’s heartbreaking backstory of being abandoned when his family had a baby. Tramp does find his happy ending and is adopted by Lady’s family at the film’s conclusion.

The press for this Lady and the Tramp live-action adaptation also carried a similar message. Every dog that appeared in the film was rescued from shelters across the country. After production wrapped, every dog found a forever home. While this movie is far from perfect, my hope is that it connects younger viewers to this timeless story and even prompts them to discover the 1955 original classic.

Hi there! I'm a Midwestern native and lover of all things Disney. Walt Disney World was my favorite place to visit growing up, and I'm always counting down to my next trip! Currently, my favorite trips involve runDisney races. I live in the suburbs of Chicago with my husband and our golden retriever, Lady. Follow my adventures on Instagram @jessandladyrun