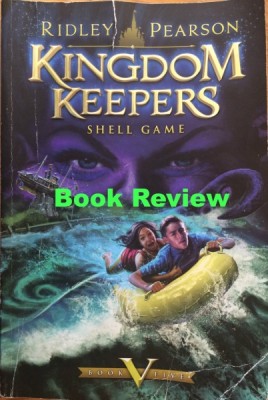 The Kingdom Keepers – Finn, Willa, Charlene, Maybeck and Philby – have been invited on the first ever Disney Cruise through the Panama Canal. Their DHI’s (which, just to confuse us, stands for both Disney Host Interactive AND Daylight Holographic Imaging) are going to be installed on the Dream, so that cruisers can interact with their holograms.

Sounds like fun, right? Well, the Kingdom Keepers know that there’s another reason they are on board. Wayne, the mysterious Imagineer who has been their mentor, has reason to believe that the Overtakers (those nasty real life Disney villains) have already infiltrated the ship.

The book does indeed begin in Walt Disney World, with a particularly exciting scene at Typhoon Lagoon. In this scene, Finn is attacked by Disney villains not in his holographic form, but in his much more vulnerable human form. This scene takes place in the dead of night after park hours, and as always, that adds to the tension and appeal of the series.

Once the kids are onboard the Dream, it’s as if the author is taking the readers on a virtual tour of Disney’s cruise ship. As the kids get to explore this huge floating city, so do we. This includes a stop on Castaway Cay, of course.

Part of the tension in this book is that most of it takes place on the ship – in other words, unlike the previous books, the kids are trapped. They have nowhere to escape, and constantly have to be on the lookout for the Overtakers.

Interpersonal relationships play a large part in this entry in the series. Since the Overtakers are able to cast spells, there is a constant paranoia about who might be under their influence. The kids have trouble knowing who to trust, especially after a family member and some classmates are brought under Maleficent’s thrall.

Add to that the enthusiastic young Cast Members aboard the Dream who want to help (and one of whom is definitely flirting with Finn) and the power struggle between Finn and Philby as to who is the alpha male of the group, and you’ve got some problems. Not quite as big as the problem of the Overtakers trying to steal Disney magic, but for a high schooler, pretty darn close.

To add to the kids’ angst, there are rumors that the DHI program is going to be upgraded. New servers, new holographic technology – does that mean new models for the holograms? New Disney Hosts Interactive? New Kingdom Keepers? As much as the kids don’t want to believe it, they’re beginning to realize it’s a very real possibility.

I found the fight sequences in this book to be somewhat more violent than in the previous books. With the idea that all the combatants are holograms, the threat of actual physical danger is lessened. However, the kids spend time swinging clothes hangers, swords, and other objects at their enemies quite a bit.

And here’s a warning for those who hate to wait – unlike the other books so far in this series, this one ends on a cliffhanger. So you might want to have Kingdom Keepers VI: Dark Passage on hand before you finish this one!

What are your thoughts of Kingdom Keepers: Shell Game? Let us know in the comments!