As with every good ride the experience starts with the queue. The queue for Skull Island: The Reign of Kong is no exception but what is amazing about this queue is that you will actually enjoy the time you spend in the queue. Be ready to be spooked as the line features lifelike animatronic figures and live haunted house-style actors that scared the hell out of me. As a matter of fact the mood is set right from the start with skulls everywhere and skeletons, similar to those in The Revenge of the Mummy. Even the stroller parking area is scary! 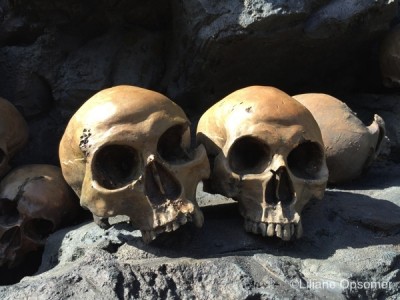 My favorite scene is the animatronic witch standing in front of a giant skull. 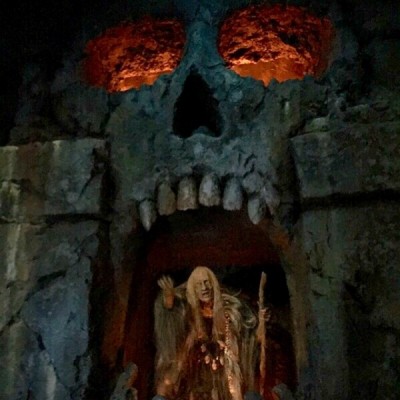 And I really loved the slug. I did not think that it was very scary though. It was more like a Harry Potter moment when you know that something is dangerous such as Nagini, the dementors, or even better Aragog. 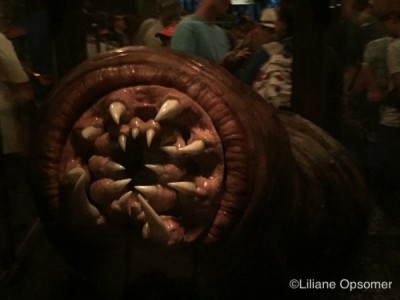 Next you board a 72-seat, open-sided expedition vehicle and after driving in a loop outside the doors of Skull Island swing open and guests embark on a 1930’s expedition.

Inside Skull Island you are caught in a clash between prehistoric beasts from which only one can save you: the King himself. When the larger than life King Kong roars to life be prepared to come face to face with a three stories tall ape. 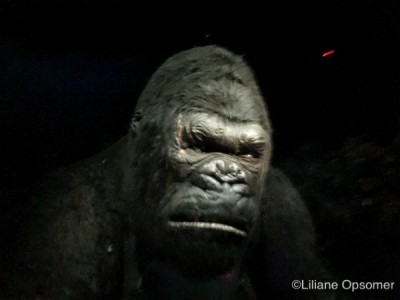 The multi-sensory, multi-dimensional ride is simply put, amazing. The King is back and Skull Island is his home. May he have a long reign!

Take a peek at Skull Island: Reign of Kong:

Kong Skull Island coming to a theater near you

So what is next? Kong: Skull Island the movie of course! The movie directed by Jordan Vogt-Roberts, and produced by Warner Bros. Pictures and Legendary Pictures, tells King Kong’s origins. The flick is currently in post-production and a trailer was just released at the San Diego Comic-Con. Staring Tom Hiddleston, Toby Kebbell, and Brie Larson the movie was filmed in Vietnam, the island of Oahu in Hawaii, and Australia’s Gold Coast. The cinematographer is Larry Fong of Batman v Superman: Dawn of Justice fame.

What is so amazing is that the movie announced in July 2014 at the San Diego Comic-Con is having a ride at Universal’s Islands of Adventures before it is even seen on the big screen.

Kong: Skull Island is scheduled to be released in the United States on March 10, 2017 in 2D,3D and IMAX 3D. But of course, you can always catch Kong at Universal’s Islands of Adventure. Are you excited?

For more information on the new ride and all happenings at Universal Studios Orlando and Islands of Adventure, check out The Unofficial Guide to Universal Orlando by Seth Kubersky.