Ryan loves Annie. Cole loves Starr. Spinelli love Lulu. And us? We LOVE THEM ALL!

The fans of ABC’s “soaps” are getting geared up for Super Soap Weekend, which will be held on November 10 and 11, 2007. This is the twelfth year for this event, which is held at Disney-MGM Studios in Orlando, Florida. Stars from all three ABC soaps (All My Children, One Life to Live, and General Hospital) make the trek to Orlando each year so that they can personally “meet and greet” thousands of their fans. And we love it!

Take it from a Super Soap Weekend (SSW) veteran: Although this weekend is all about fun, it’s also a lot of work! I’ve attended 10 of the past 11 SSW’s (I missed the very first one) and I will be there this year, too. So I wanted to take this chance to clue you in and give you some pointers on enjoying SSW to the fullest!

If you’re like most fans, you started planning for this event way in advance. You’ve got your room reserved. You’ve got your airline tickets. You’ve waited patiently (or maybe not so patiently) for the list of attending stars to be announced by ABC. And you’ve got a “plan” for the weekend. This is good. It’s all very good.  But having a “plan” just isn’t good enough. Don’t get me wrong. You do need a plan, but not just a Plan A. You’ll need a Plan B and a Plan C and most of all, you will need to be willing to throw all of these plans to the wind on just a moment’s notice.

Yes, you heard me right. Throw all of those plans to the wind! Are you wondering what on earth can happen to destroy not one, not two, but three plans? Well I’m here to tell you, confusion will do you in! It won’t be the confusion of the event itself. This event has been fine-tuned over the years and although there is always room for improvement, let me just say that SSW 11 was much, much more organized than SSW 2! The confusion that will send your plans to the wind will be caused by your overwhelming excitement. Once you step foot inside Disney-MGM Studios, you’ll wonder, “What should I do first?” and last week’s perfect plan may not make much sense anymore.

Where do you start?

Be realistic.
There will be so much going on during this event that you won’t possibly be able to see or do it all. No one can. Not even the veterans. But you can see and do a lot of it if you can keep your confusion down to a minimum.

Do Your Homework and Be Prepared.
You can find a list of attending stars, a link to the map of “On Location” Autograph Stations, and much, much more on our Super Soap Weekend page on the MFL website. This can help you with your pre-planning.

Digital photographers should be sure to bring plenty of “memory” and those who shoot film should bring plenty of that! Your opportunity for photographs is never-ending and you won’t want to miss a single shot. Don’t forget those extra batteries, either! Also, take lots of pictures. You’ll want pictures of yourself with your favorite stars, but be sure to get some candid shots, too.

Get a good night’s sleep the night before.
This is a must. You are going to be on your feet from the crack of dawn (or earlier!) until way past dark. You’ll walk from one end of the park to the other. And back. You’ll be pushed and shoved. You’ll be lugging around all sorts of odds and ends like your backpack, photo cards that have been signed, your Soap Opera Digest guide, souvenirs, and even toothpaste. Yes, toothpaste. Did I forget to mention that Colgate Total sponsors this event? Well it does, and they hand out goodie bags!

Dress Comfortably.
You will be doing a lot of walking and standing this weekend, so be sure to wear comfortable shoes. The weather may be warm during the day but it will be cooler at

night. Come prepared for both.

Get to the park early.
If you are planning to take part in an “On Location Autograph Session” by meeting your favorite stars personally, you’ll need a FASTPASS to do so. Getting a FASTPASS means standing in line. A long line. A long, long line! Over and over. (The things we do for love!) These lines form very early in the morning, outside of the gates of MGM. Be sure to grab a Soaps In Depth magazine on your way in to the park. This contains the schedules for the entire weekend, along with other juicy information about the ABC soaps and their stars. They make great souvenirs, too. 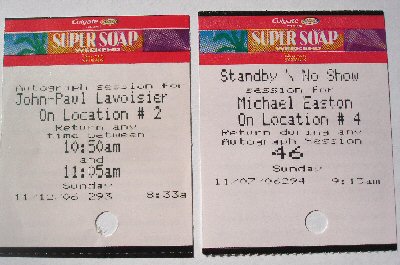 A Guaranteed FASTPASS (left) shows the time window for you to return for your autograph. The Standby FASTPASS shows your assigned number. People are taken at either session, in numerical order.

Know how FASTPASS works.
Once the gates open, you will be directed to a separate line for each soap. These lines will proceed to the FASTPASS location for that soap. Here you’ll wait until 8 a.m. when the first FASTPASS is issued. You must be in line, holding your own park entry ticket, to get a FASTPASS. You cannot send your ticket with another member of your party. Once you get your FASTPASS ticket, you can stop there or you can get back in any line to get another. You’ll continue to do this until all of the FASTPASS tickets have been distributed or you have all of the FASTPASS tickets that you want. A limited number of FASTPASS tickets will be distributed for each autograph session.  After that, a limited number of “standby” tickets will be made available. Standby tickets do not guarantee an autograph. Standby ticket-holders will be taken if there is time remaining in a session after all FASTPASS ticket-holders have received their autographs. They are numbered and good for either autograph session.

What Next?
Your FASTPASS will have the time and location of your personal autograph session on it. Your sessions are secure and all you have to do is show up, so now is the time for planning. You can see where you need to be and at what time, so get out that Soap Opera Digest with the schedule of events and fill in your available time with motorcades, talk shows, shopping, or walking around taking photos.

Don’t forget food.
This will be an extremely busy weekend for you and you’re going to need lots of energy! Throw some snacks in your backpack so that you can nibble without using much time or energy. Once you’ve collected your FASTPASS tickets for the day, look at your schedule and decide on a good time to eat at least one substantial meal.

Now that we have the basics out of the way, we can discuss the specifics. There’s something for everyone this weekend! 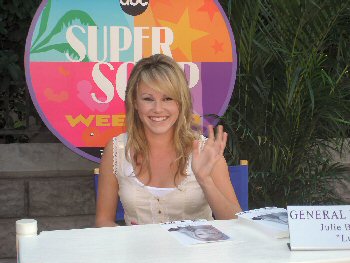 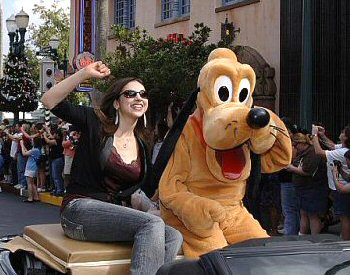 Eden Riegel (Bianca Montgomery, AMC) and Pluto in the motorcade down Hollywood Bouldvard. 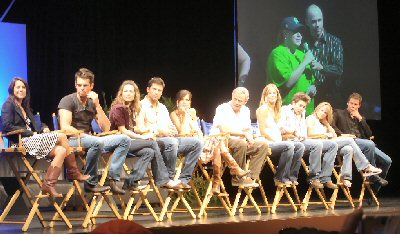 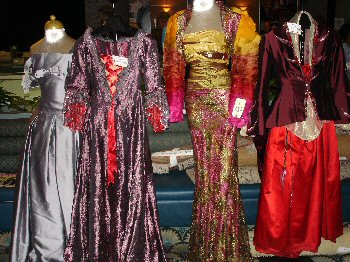 Some of the costumes available at Soap Central. 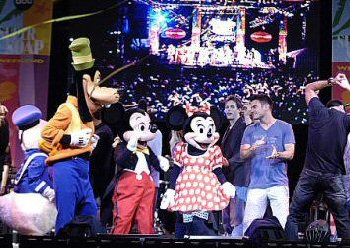 Jammin’ at the Street Jam.

All of this and more is included with your theme park admission to the Disney-MGM Studios. You’ve just gotta love it! I do, and I hope to see you there!