Walt Disney’s love for the “Iron Horse” – the train – is well-known, and there’s evidence of that affection in the trains we enjoy riding at Disneyland and the Magic Kingdom.  But Walt also loved real flesh-and-blood horses – he was a skilled rider and an enthusiastic polo player – and evidence of that passion can still be seen at Walt Disney World. 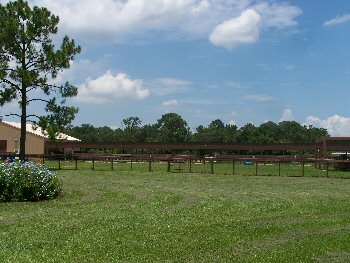 Recently Darcy Cormier, a horse-owner herself and the publicity representative for Fort Wilderness, took me on a tour of the WDW stables. All the horses at Walt Disney World live in the Tri-Circle-D Ranch at Fort Wilderness, which has two sections, one at the front of the resort where the trail rides depart, and the other near the boat docks. Visitors are welcome to tour the barns near the docks between 7 a.m. and 7 p.m. There you’ll see a stall that has been converted to a small display, with photos of Walt and some of his horses and information about the equine population of WDW.

The Ranch is home to several different breeds, including the large draft horses who pull the Magic Kingdom trolleys – black, grey and dapple Percherons, Belgians and Clydesdales.  The horses used for the trail rides include Quarter Horses, Arabians, Paints, a few mixed breeds, a draft horse cross and one Gypsy Vanner. The pony herd (including the sets of white ponies who pull Cinderella’s coach) is comprised of Shetlands and a few miniature horses.

(I’ve seen the white ponies pulling Cinderella’s carriage during the Christmas parade, but also saw them recently transporting a bride to her wedding at the Grand Floridian. They don’t move very quickly but I can’t imagine a more elegant way for a bride to arrive.)

Even devoted horse lovers might not have recognized one of those breeds. Bon Jara is the Gypsy Vanner gelding who came to live at Tri-Circle D Ranch when he was just ten months old. He was added to the herd to showcase this unusual breed which is rarely encountered in America. This European breed is a small draft-style horse, black or brown and white in colour, with long manes and tails and long hair on their lower legs (called feathers). They’re also known for their wonderful temperament. Bon Jara is currently used on trail rides.

While the trail ride horses stay in Fort Wilderness, the others need to be moved to the Magic Kingdom or other locations for their assignments. To accomplish this, the Tri-Circle-D Ranch uses several different types of horse trailers, including a custom designed and built aluminum 5th wheel designed with three 8X8x28 stalls that can be used to transport up to 3 draft horses or 6 ponies or some combination. (And that’s a BIG horse trailer!)

You probably won’t be surprised to hear that at the Tri-Circle-D Ranch, the health and happiness of the horses is top priority. Darcy Cormier explained to me that not only are their veterinary needs catered to, but also their emotional well-being.  For example, the trail horses are broken up into smaller herds or “strings” of approximately 6 horses.  Each small herd lives and works together to maintain the naturally occurring hierarchy of the animals – something that is very important to horses.  The horses are fed on a strictly regulated feeding regime that was developed by the head Animal Nutritionist for WDW, who also oversees the feeding of  Disney’s Animal Kingdom’s more than 1000 exotic animals.

And of course, where there are horses there is horse manure. The manure spreaders found at most local farms are not used at WDW; instead the manure is collected and transported to a facility where it, along with other organic material from all over WDW property (including Disney’s Animal Kingdom) is combined and transformed into compost.  In 2006, over 3,000 tons of manure was sent to the compost facility, and about 50,000 pounds of compost are produced daily.

I asked Darcy how the horses are taught to behave so calmly in crowds and when confronted by giant mice and tigers that walk on two legs. Her answer: “Training, training, training.” She added that guests should not pat the horses (including the horses pulling the trolleys) because, just like guide dogs or other service animals, the horses are working and shouldn’t be distracted.

You’ve probably encountered the horses who work in the Magic Kingdom, but there are many other opportunities for a little “equine interaction” at WDW, including:

If you’re interested in the trail ride, you might find it reassuring to know that no riding experience is required, as this is a slow-paced ride with quiet horses. It covers two miles and lasts about 45 minutes, taking the rides through lush Florida landscape.  Much of the trail is “off the beaten path” where the environment is virtually untouched.  Guests may encounter any assortment of native Floridians, such as deer, armadillos, bald eagles, fox and bobcat, among others. (Of course, these are wild animals, so they may or may not choose to show themselves at any given time.)

And one last encounter of the horsey type: The Headless Horseman is rumored to have been spotted in the Magic Kingdom and also Disney’s Fort Wilderness Resort & Campground around Halloween time.  The horse he rides looks amazingly like the big black Percheron, Ike, who is typically seen pulling a Main Street Trolley.

Knowing that Walt loved horses, I see the beautiful equines at WDW as a reminder of him and part of his legacy to us. They bring a sense of history, romance and elegance to the parks and their presence is one of the things that makes WDW unique.