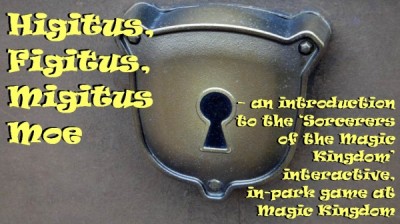 There is magic afoot and it is not all Pixie Dust and bibbidi-bobbidi-boo.  Hades – yep, god of the dead, ruler of the underworld – has decided that the Magic Kingdom will make a good vacation home.  After all, it is understandably difficult to get a good tan in the underworld.  Of course, Merlin and the other good sorcerers of the Disney universe think that this is a less than perfect plan.

I suppose that I should have expected it.  That if there was a magical war going on around us, that my family would be dragged in.  As we walked down the crowded Main Street discussing where we could go first, none of us saw the first warnings.  But as we entered the outskirts of Liberty Square on our way to the Haunted Mansion, this appeared: 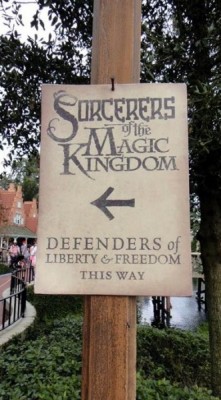 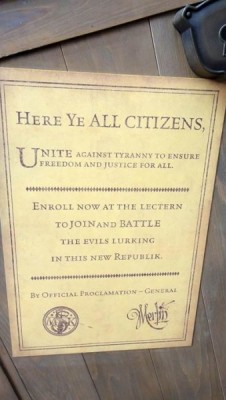 These signs just appeared before us; we knew we were being called.  We headed to the lectern located at the back of the Ye Olde Christmas Shoppe.

The enlistment for Sorcerers of the Magic Kingdom was quick and easy.  We walked up and indicated that we were ready to use our magic for good.  Our recruitment officer scanned our MagicBands and then gave us a special key card.  We were all on the same key card and thus were able to play one game together (we took turns).  She also gave us our first sorcerer’s kit (one pack of cards each, a map, and our key card). 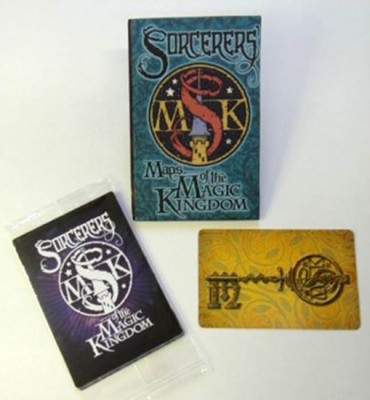 Next we headed to the training portal with our recruiter.  She showed us how to access the magic of the portals and how to use our spells to defeat the villains that we would encounter. It wasn’t difficult and as long as you are able to follow along with the story, you should be able to play the game.  In fact, we met many fellow sorcerers along our way.  The youngest was perhaps 4 or 5 and the eldest…well, age really does not matter in the Magic Kingdom now does it?

At the end of our training we headed out to protect the Magic Kingdom from Hades.  We had received our next portal when we finished our training, we used our map and headed that way. As our story continued to unfold and we visited Fantasyland, Adventureland, Liberty Square, and Main Street, we learned to have our spells ready.  I am not going to tell you the story as we heard it, but I will give you a bit of helpful information we found out as we hunted the villains.

Finding the next portal can be challenging for some sorcerers, so having a park map to refer to as well as the game map is helpful.  Be aware that some of the portals are not obvious – and that the portals in Adventureland are not the same as the A Pirate’s Adventure ports.  If the other people in front of you have large pirate’s maps, keep looking.

To open your portal, look for the lock; swipe your key across the keyhole.  Now it is time to stand on the portal ‘spot’ and see what will happen next.

As you watch the portal will open.  You might be asked to cast a spell, or use your sorcerer’s crest (the back of any spell card), or just to learn something that will help you later on.  It is important that whoever in your group is casting the spell (sorcerer’s crest) keeps the card squarely over the Sorcerers of the Magic Kingdom circle.  This is very important in dim lighting, like at night.  If the card is not working, take a step back and try again (Why does this work?  Have a look at the spoiler section at the end of this blog post).

What happens when you fail?  Do not worry.  Your guide will send you to another portal and you will get another try there.

Each villain program takes about 30 to 45 minutes to complete.  This can be much longer if you play during heavy play time – basically the mid-part of the day or during parades/fireworks on Main St. – when the lines at the portals can be long.

This game is free with admission.  Each person in your party is eligible to received one pack of cards (5 cards in a pack) a day.  Each person much attend the recruitment center to get their cards and your group must play at least one portal between packs of cards (only one portal needs to be played on your key card for everyone to get their pack).  If you beat Hades, you will get an additional pack of cards (thus two packs of cards that one day). 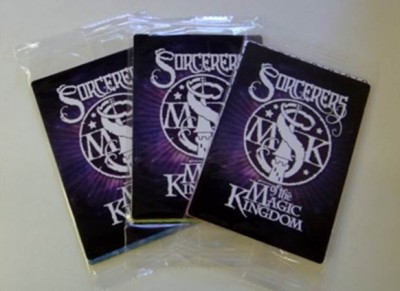 There are nine classes of Sorcerers of the Magic Kingdom cards – Animal, Fairy, Hero, Machine, Monster, Mystic, Princess, Toy, Warrior – and there are seven types of attacks – Charming, Energy, Flying, Gross, Quick, Strong, Wishful – These details are printed on the cards and are only important at the medium and difficult levels.

There are 70 cards (plus an increasing number of special cards that are given out at special events).  Cards 1-60 are available in the free packs.  You will not know what you will get in those packs until you open them.  Cards 61-70 are only available in the 7-card booster packs (see below).

Some things in life are not free:

You can purchase a few Sorcerers of the Magic Kingdom related products.  There is a card holding folder ($34.95 + tax).  This folder has pages of plastic card holders and is a good way to keep your cards straight and safe.  It also has a pocket for the ‘disks’ for the at home game (sold separately). 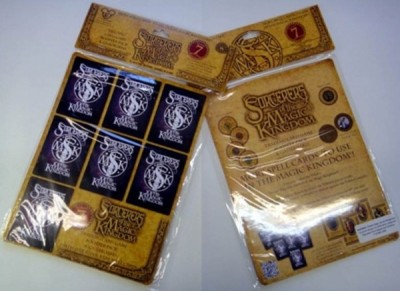 There are Play At Home/booster packs ($13.95 + tax), which include a random mix of the following: 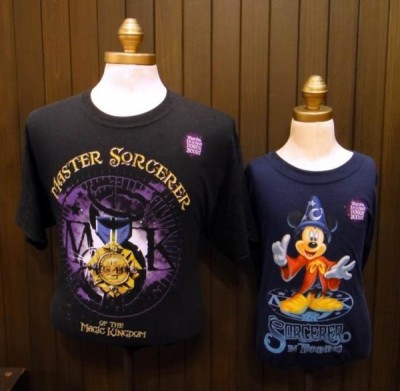 Currently, the final thing available for purchase is the grand master t-shirts.  These shirts give bonuses in game play. 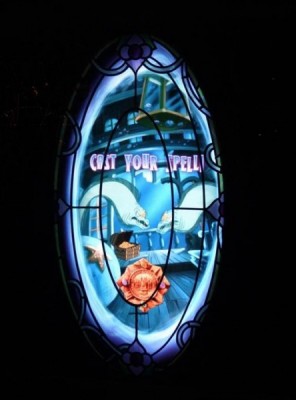 The bonus is an increased percentage buff to your spell attack, thus making defeating the villains easier. The bonus is indicated on the lower part of your ‘cast your spell’ window. 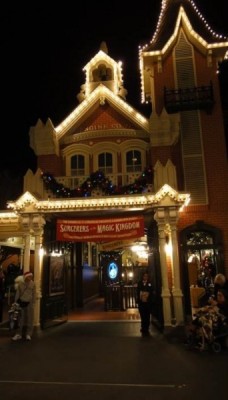 We did not complete the easy level in one day (or even in our first week at the parks).  Do not fear to leave the game midway through.  As long as you use the same RFID media (magic band, ticket, card), you can pick up where you left off.  Forgotten exactly where that point was?  Stop by the recruitment office and they can remind you exactly where you need to go.  They can also supply new maps, and if you have played a portal since you picked up cards and it is a new day, a new set of cards.

I hope that you enjoy this interactive game as much as we did.  The storytelling is wonderful and there is definitely magic to be had.

There are four villains per level that much be defeated before the endgame (one for each area of the map).  You will have to defeat Hades to complete the level.

The portals use cameras (one on each side of the screen) to see your card.  They are focused on the space above the Sorcerers of the Magic Kingdom maker on the ground.  In low light – like at night – it is very important to have your cards over this marker.  If not, the camera will not read the cards.  Some portals are more difficult than others.  If you take a step back from the marker, it will help with the shadow of your body over the card and the card might then be readable at these portals in low light conditions.

Have you attempted to play Sorcerers of the Magic Kingdom before? Which is your favorite set of portals?