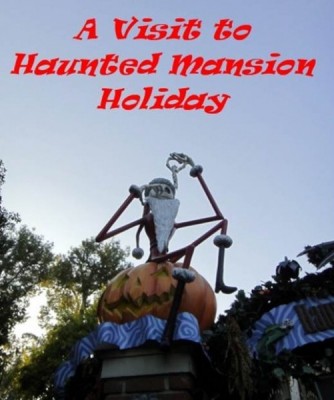 One of the favorite Disneyland attractions is, undoubtedly, the Haunted Mansion.  Its eerie exterior beacons the adventurous to enter and escape its ghostly inhabitants.  But for a few months in fall and winter, the mansion plays host to a different sort of adventure – a happily haunted holiday happening. 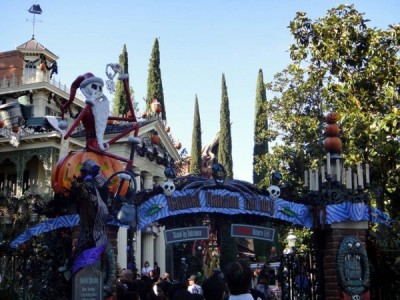 This is one holiday [attraction] you will want to survive. 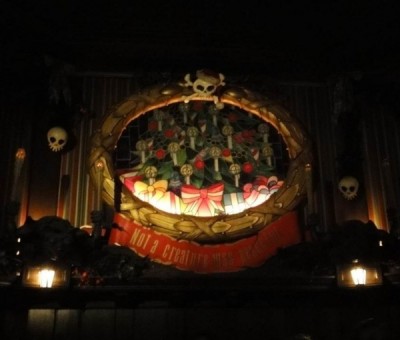 At first Disney Imagineering toyed with the idea of bringing A Christmas Carol into the Haunted Mansion.  Although the story fit the Christmas holiday requirement of the new overlay, there were several problems with bring this story into New Orleans Square.  That’s when several Cast Members got creative and cobbled together the idea of the holiday overlay for the Haunted Mansion and a shelved ride idea based on the Nightmare before Christmas.  The result was an instant success that has a near cult following. 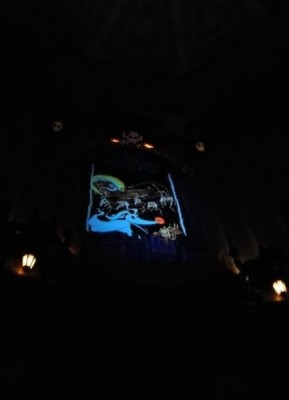 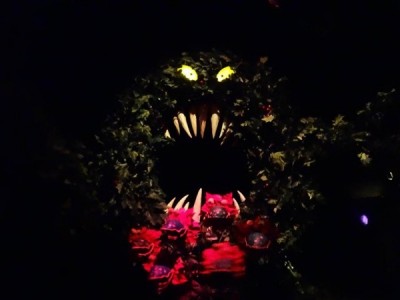 The first year music for Haunted Mansion Holiday was composed by Gordon Goodwin.  His score was more reminiscent of the Haunted Mansion than Nightmare before Christmas and was most notable for his scarols (Halloween Town’s version of our favorite Christmas carols) that played in the queue lines in the pet cemetery. 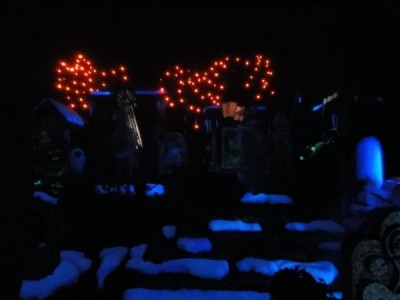 The following year (2002), John Debney was asked to readdress the music for the overlay.  He created an adaptation based on Danny Elfman’s original score for the movie which was far more familiar to and popular with the guests visiting the attraction. 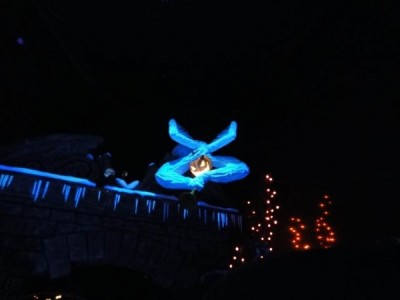 Goodwin’s music still plays in the stretching room and exit crypt for those interested in trivia.  Sadly, Goodwin’s scarols have been relegated to the pages of yesterland. 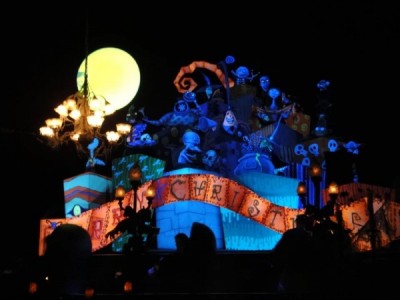 As one could imagine, Jack and his Halloween Town Holiday Committee have made a few notable décor modifications to the mansion and its grounds.  From long before reaching the gates, some of these changes can be seen.  Pumpkins, Halloween garlands, and black and white striped bows bedazzle the mansion and the grounds.  For several years, Sparky’s gravestone has appeared in the pet cemetery.  As you enter the mansion, Jack’s team has been busily working to bring holiday cheer to the old house.  Christmas lights, jack-o-lanterns, a huge Christmas tree, presents, snow, and good cheer have been loaded in. 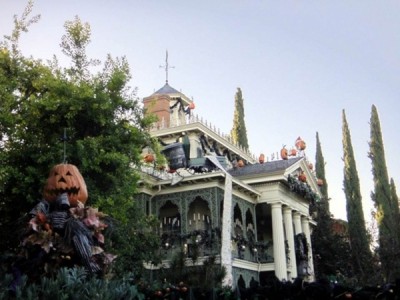 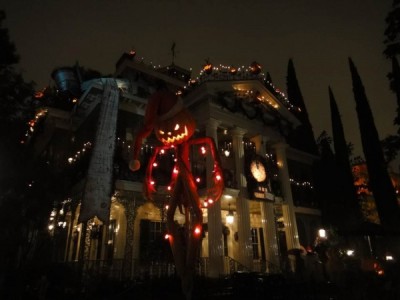 The most anticipated surprise each year is the gingerbread house.  Never the same twice, this standard fare from American Christmas holidays, dwarfs the ballroom dining table.  The smell of ginger and sugar floods your senses as you turn to take in the cookie masterpiece – have a look at the Disney Parks blog for this year’s creation. 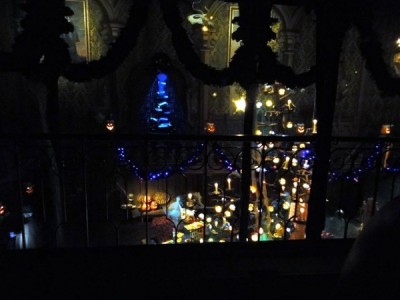 Our Ghosts Change their Skins

Each year several audio-animatronics swaps are made.  Notably the ravens seen throughout your Haunted Mansion tour have been replaced by Teddy (the vampire teddy bear from the Nightmare before Christmas).  Do not be surprised to see Zero drop by in the most unexpected places; and be prepared for other Nightmare before Christmas characters – such as Lock, Shock, and Barrel, Oogie Boogie, and Jack himself – who take over some of the plinths of the notable Haunted Mansion characters. 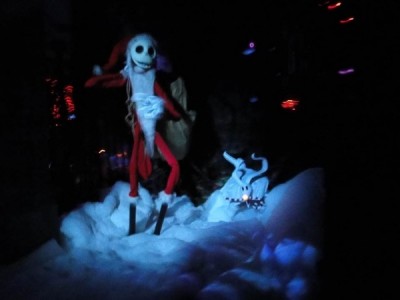 In Madam Leota’s séance room, the medium recites the 12 days of Christmas as she floats above her table.  Have a look at her tarot cards spinning around the room.  Her ghoul love is very generous. 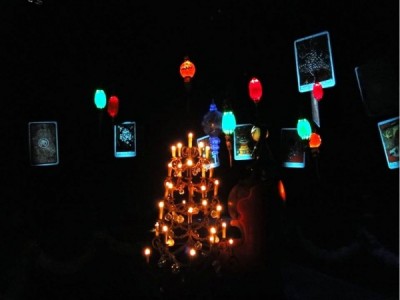 This year, the big question was, ‘Will Hattie be joining in the holiday celebration?’  It can now be reported that, though his bride is vacationing, the Hat Box Ghost has stayed on to enjoy his haunted holiday.  So, those of you traveling during the overlay time who wanted to see Hattie can still see him.

Stories Have to be Told

The old story goes: It was only last year that Jack, slightly misguidedly, unleashed his version of Sandy Claws on the world.  He learned a bit on that night’s ride and agreed with Santa that perhaps Christmas was best left to those of Christmas Town.  But it was so much fun that Jack has found a happy coincidence.  Here at Disneyland, in the old ghostly mansion, there are 999 happy haunts who might just appreciate Halloween Town’s take on the cheery holiday.  So, as a bit of fun, Jack and his friends have set the stage for the best ghost Christmas party of the year.  Guests to Disneyland are invited to the party as well.  As the guests enter the mansion, they are welcomed by the Ghost Host and Jack who guide them through the Halloween Town Christmas. 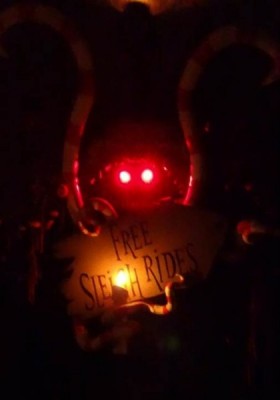 For those who love the movie, Haunted Mansion Holiday has quite a few Easter eggs.  Make sure that you look around you when you are able, you never know who you may find…or when (for example, the Halloween Town Band is often found in the windows of the portrait hall but they are visible only when lightning strikes). 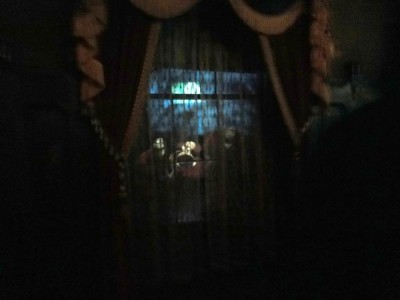 Some guests have heard of Oogie Boogie’s Holiday Tricks and Treats Scavenger Hunt.  This used to be a sheet that could be picked up at City Hall and would give clues as to where you can find Oogie Boogie hidden in the attraction.  Now Oogie Boogie is front and center, but you can still find Oogie hidden in other areas if you look.  Check the moon for Oogie’s shadow and have a good look through the cluttered attic, there is an Oogie clapping toy in there. 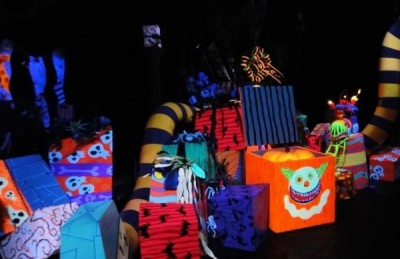 This overlay is a family friendly romp through a mashup of the Haunted Mansion and the Nightmare before Christmas.  Haunted Mansion Holiday has made a place for itself in the Disneyland pantheon of holiday offerings and is quickly becoming a classic Disneyland attraction. 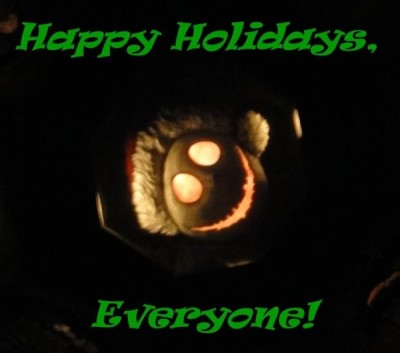 What is your favorite part of Haunted Mansion Holiday? Share in the comments.