A couple of years ago, the Walt Disney Company did a campaign where you got in to the parks for free on your birthday.  I think this was an awesome idea and if you were a Florida resident, it was probably easier to coordinate than it was for those of us around the country.

I’m sneaky.  My birthday is the first week of December which happens to be a fairly low-crowd time of year and I have managed to spend quite a few of my birthday’s skipping around the theme parks.  When you’re a kid, every day at Disney is magical; there are activities that are geared just for you.  For us adults?  Not so much.  We can’t really get make-overs at the Bibbidi Bobbidi Boutique; we cannot take part in the Pirate tutorials.  But when it’s your birthday?  Mickey rolls out the red carpet no matter what time of year!

My first birthday trip was for my 30th birthday.  I chose to spend that day in the Magic Kingdom.  I stopped and got my complimentary “It’s My Birthday” pin and then basked in the glory of having cast member after cast member wish me a happy birthday.  We ate lunch at the Crystal Palace where Pooh and Friends brought me out a special birthday cupcake (complete with candle!) and a signed birthday card.  For dinner, we ate in Cinderella’s castle and the table was decorated with Mickey confetti and I received a complimentary sundae with a chocolate crown on it!

The next birthday trip was a little less celebratory (no big number) but I enjoyed some of the same perks from the previous trip.  Then we took our son to WDW for his 16th birthday.  This was quite possibly the most amazing trip for him.  It started out waiting for the Magic Kingdom to open and a CM came over and started talking with us and when we told her it was his birthday, she sprinkled him with Pixie Dust (Mickey confetti) and told him he would have good luck all day.  And you know what?  We did!  We walked on to every ride, he received birthday wishes all day and when we ate dinner that night at O’Hana’s, they brought him out a special dessert with his name spelled out in hot fudge!

The people who took our ADR’s must have made a special note on all of our dining choices because for the entire week, my son received special birthday treatment everywhere that we ate!  He was thrilled!  We have pictures of him with multiple cupcakes and desserts and he is just grinning like a loon in each of them.

For my 40th birthday, I truly felt honored.  In my room, after arriving back at it late on my birthday night, was a giant solid white chocolate Mickey Mouse surrounded by gourmet cookies and chocolate covered strawberries with a card from Minnie herself!  Who knew she could get in to our room!  I felt like that was the ultimate birthday gift and the fact that Disney makes a big deal out of birthdays of all ages – not just kids – makes them even more special.

Don’t be afraid to let them know what you’re celebrating.  When making your reservation and they ask, don’t be shy!  You might be surprised at what Disney has in store for your special day! 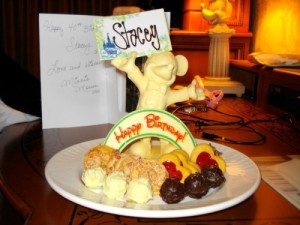