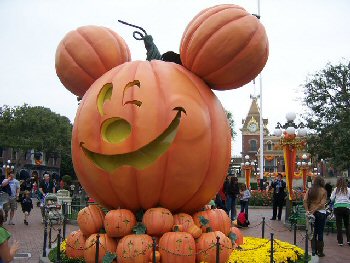 It’s HalloweenTime at the Disneyland Resort (or, as the kids say on a Northern California Disneyland radio commercial, “It’s HalloweeeeeeeenTime!”) and both Disneyland and California Adventure have got orange-and-yellow highlights. I wasn’t expecting the crowds I encountered on my recent visit, but even when sharing the park with lots of visitors, a weekend in Disneyland is always a treat! Read on for a peek at some of the Halloween goodies I encountered on my last visit. 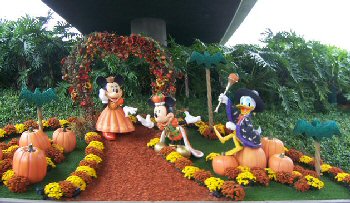 It seems that HalloweenTime is no longer the park’s off-season, at least judging by the cars already filling the massive Mickey and Friends parking structure. But, at least the characters on the levels’ signs are dressed in costume, and you’ll start getting into the spirit on the tram ride over to the park. I’m always impressed that the Disneyland landscapers can make the underside of an overpass look so adorable and festive! 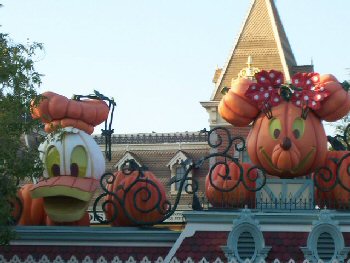 The ticket booths at Disneyland’s entrance are topped by familiar-looking “pumpkins.” While waiting in line, I contemplate how I could make my own jack-o’-lantern look like Donald Duck (I think it would involve a staple gun). 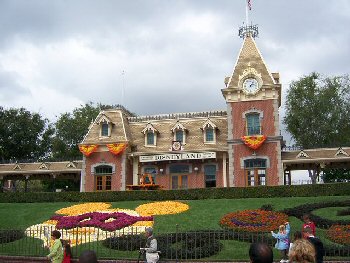 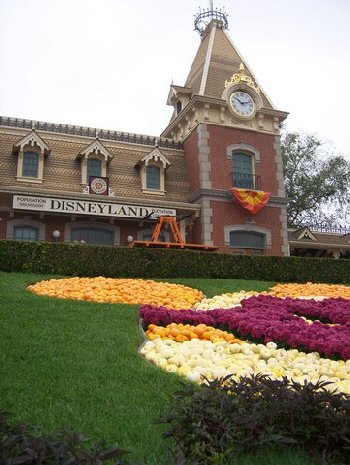 ….and has a trick of its own: the “flowers” that make up Mickey’s ears and face are actually mini pumpkins! (More than 5,000 of them, according to the Backstage Pass Annual Passholder magazine.) 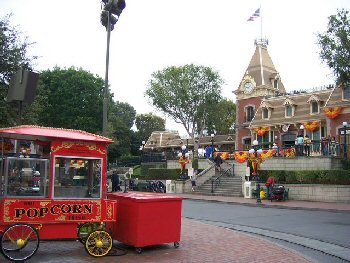 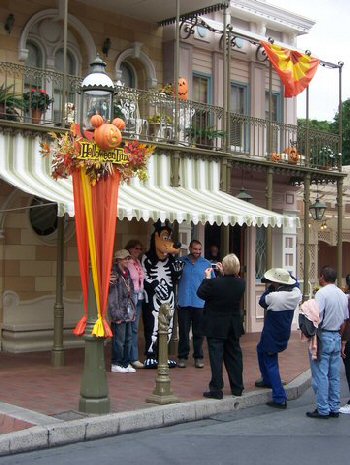 …and favorite characters dressed in costume. Here’s Goofy as a skeleton. However, I didn’t go near him to pose for my own photo. I have a long-standing fear of “life-size” Goofy, especially when he’s dressed as a skeleton. 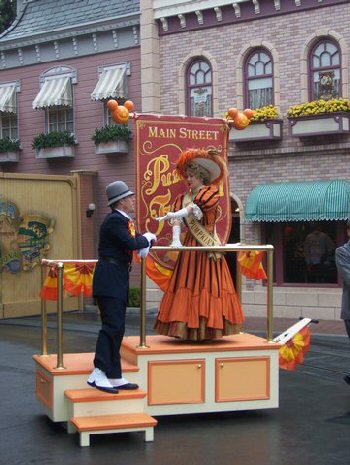 The Pumpkin Festival show’s performers sing a song about Halloween safety in front of the Fire House. 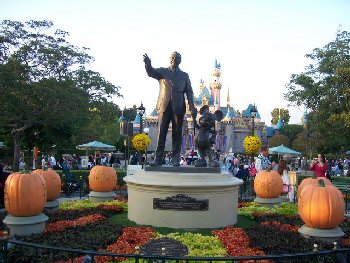 The Hub gets pumpkin-fied. Each pumpkin is adorned with a character representing each land. 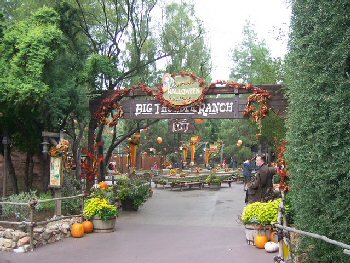 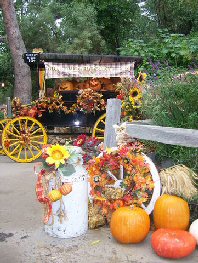 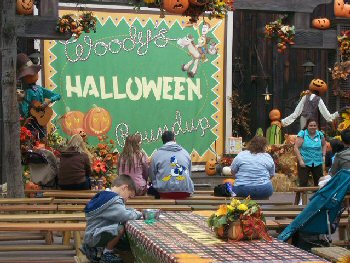 Woody’s Halloween Round-Up consists of a show, scary stories, and arts and crafts. Although a show wasn’t happening when I strolled through the Round-Up, this youngster keeps himself entertained with some coloring. 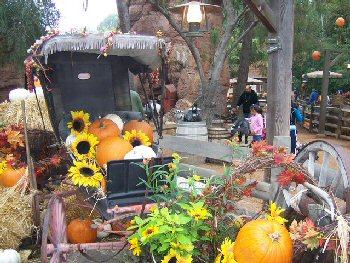 You can also find a pumpkin-decorated petting zoo area (or “petting boo” area, as the park calls it), with mellow goats and lots of smiling kids (of the human variety). 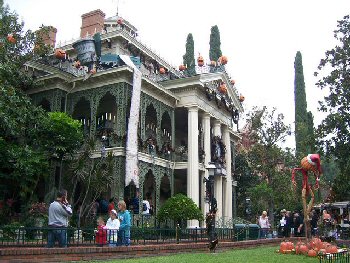 The Haunted Mansion gets its annual Nightmare Before Christmas makeover, which Backstage Pass says features “more than 300 candles, over 76 lighted jack-o’-lanterns, 7,000 square feet of snow in the graveyard, and 1,000 orange lights in the trees.” It’s an impressive, shimmering sight at night, but the Mansion looks good at any time. 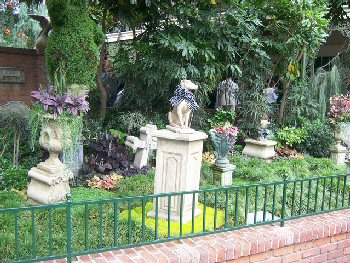 Even the Mansion’s pets get some seasonal “costumes.” 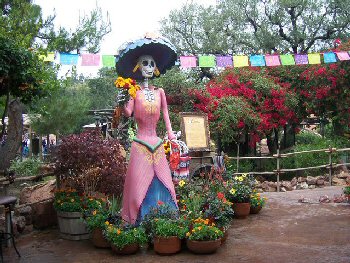 Back in Frontierland, the tranquil patio space near the Rancho del Zocalo restaurant is all dressed up to celebrate Dia de los Muertos. It’s a lively and colorful area, both by day… 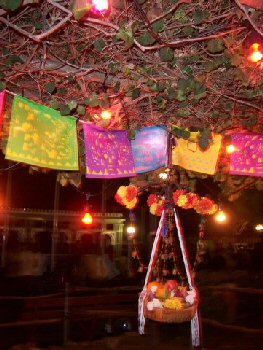 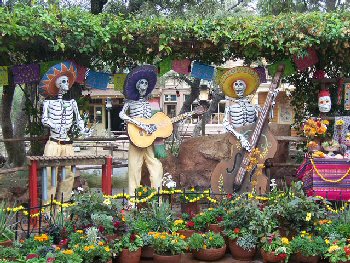 Somehow, these skeletons are less scary to me than Goofy in his costume. Maybe it’s time to head to California Adventure. 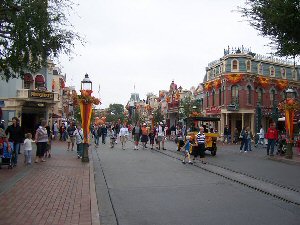 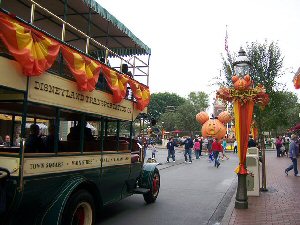 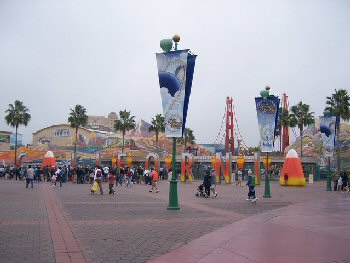 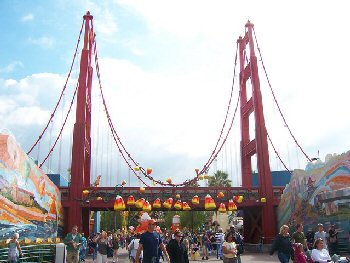 …as has the Golden Gate Bridge. But that’s nothing compared with… 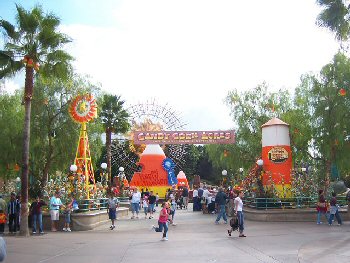 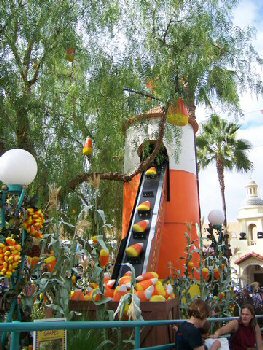 Okay, so “acres” isn’t exactly a fitting description. (Candy Corn Acres is all contained within the Sunshine Plaza area of California Adventure, at the main entrance.) Still, it does have an abundance of candy corn! 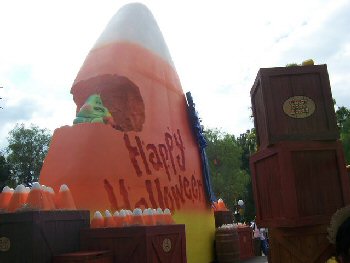 The Backstage Pass says there are “more than 6,000 pieces of candy corn” in this area. It’s a good thing Heimlich is sticking to only this big one. 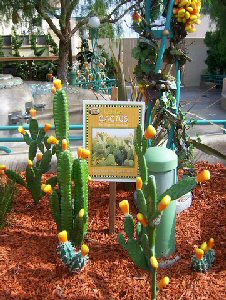 My favorite part of Candy Corn Acres: the “crops” that have grown candy corn! I never appreciated how candy-like cactus flowers do really look.

California Adventure also has a Halloween-themed Golden Screams show (in the Golden Dreams theater, featuring Disney Villains), and the Tower of Terror has received some spooky decorations. However, for me the only thing scarier than a skeleton Goofy is the Tower of Terror (whether it’s HalloweenTime or any time!), so I didn’t experience that one myself.

If you haven’t gotten enough HalloweenTime fun from the parks, buy a ticket to Mickey’s Halloween Treat. Kids can “trick-or-treat” in California Adventure by visiting treat stations. Tickets cost $29 if purchased in advance, and $39 at the gate, but hurry and get them fast, because some of the most popular dates have already sold out. 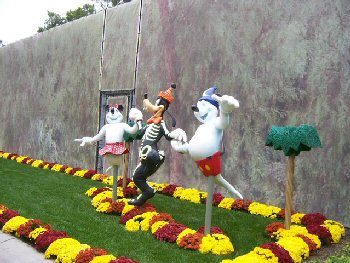