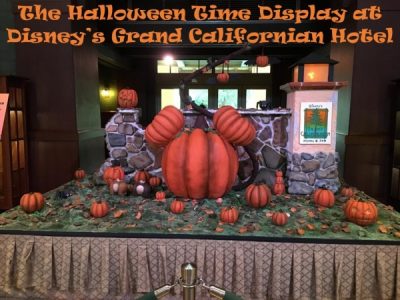 This year, the display is the Halloween Pump-“Cake” Patch. 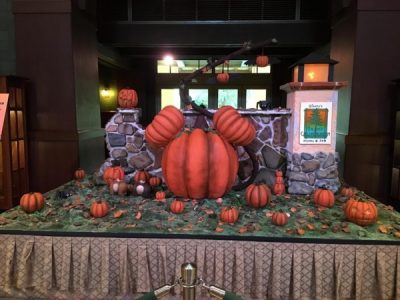 The display is edible, hence the ‘pump-“cake”’ in its name. Talking with a Disney Cast Member who spends his days in the foyer, we were able to get details on the construction of the large display. The patch sits on a couple of flat-folding tables and then an internal structure for the larger elements were added to the table.  This included a Styrofoam frame for the wall and the largest of the pumpkins.  Next the design team brought in the Rice Krispy treats! This ‘sculpting media’ was used to create the other pumpkins, the chipmunks, and spiders.  The Rice Krispy treats were also pressed on the outside of the Styrofoam forms. Once the Rice Krispy treat rough forms were finished, the team began to use special tools to shape the designs of the pumpkins, animals, walls, rocks, and so on.

After the bases for the sculptures were prepared, the team draped fondant on the display.  Some of the fondant was already colored and once pressed into the waves, angles, and bulges of the sculptures, the team used sculpting tools to finalize the details of the elaborate pumpkins, wall, and animals. 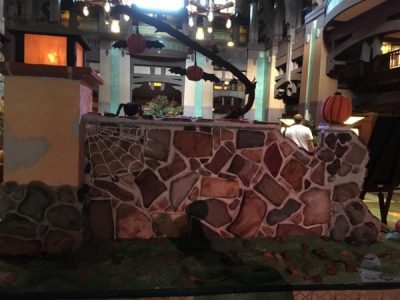 Once the main pieces were finalized, the details were added.  This included the manufacture and placement of a multitude of fondant leaves scattered over the autumn scene and detailed airbrushing (using food paint of course) to create highlights and lowlights as well as to accentuate the rocks in the large patch wall.

The Disney’s Grand Californian Hotel and Spa sign is made of fondant and hangs below a confectionery light (that really shines with Disney magic).

The most amazing information shared with us was that all of this work was completed in only two work days!

A sign beside the display boasts that there are 85 pounds of Rice Krispy Cereal, 48 pounds of Marshmallows, 34 pounds of butter, 55 pounds of chocolate, 180 pounds of fondant, 300 pounds of powdered sugar, and 54 pounds of egg whites required to make the display. So if you want to recreate this display in your lounge room, it is going to take a rather large shopping trip.

For any normal amusement park hotel, this display would be miraculous as it is; however, this is Disney and Disney means something a bit more. Hidden within the Halloween Pump-“Cake” Patch are Hidden Mickeys. For those unfamiliar with Hidden Mickeys: these hidden treats can be found throughout Disney’s parks, stores, hotels, and movies. What you are looking for is the likeness of Walt’s famous mouse. They can be the popular three circles or they can be more ‘lifelike’ depending on what the imaginer envisioned. 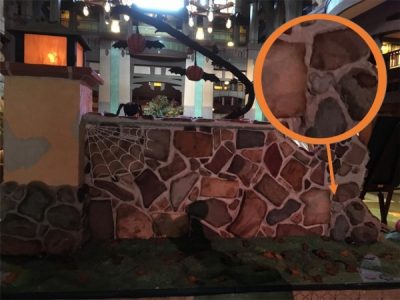 Within the Grand Californian’s Halloween Pump-“Cake” Patch, there are 13 Hidden Mickeys.  Some are very obvious and others are well hidden.  It took my daughter and I about 15 minutes to find them all (and the last one was found only with the help of the Cast Member we had been speaking with). My advice to finding them all, look on all four sides! Also, a majority of the Hidden Mickeys are located in or on the wall.

As the display is the foyer, the display is available to everyone.  You do not need to be a guest of the Grand Californian to undertake the task of finding that which is hidden. The display is a nice way to spend a half hour away from the hustle and bustle of the parks. 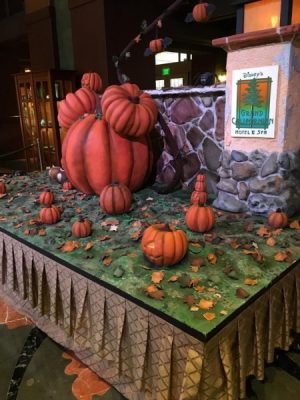 Have you stopped to experienced the Halloween Time Display at Disney’s Grand Californian Resort? Let us know what you think in the comments!