Missy, from The Mouse for Less list and of Minnesota mom’s runaway to WDW fame, one of Mic’s BFF’s

Day 12, Port of Call Gibraltar, United Kingdom, off the southern tip of Spain

Mic here again from the bridge, going a day or so out of order.   We are skipping some of the sea days at this point as well as while they were awesome, not so much excitement to put in a trip report.   We had set up another private tour for Gibraltar for one main reason; we wanted to get in depth with the history. 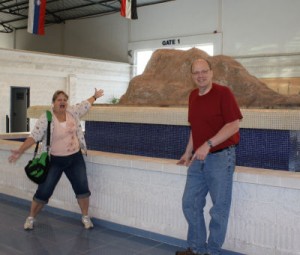 We were scheduled to meet our tour guide at 9am for party of 3 for a total of 250 pounds.    We were already a bit concerned about the pounds issue was we only had Euros, but Disney had told me when I called that they had all currencies available for exchange onboard (wrong they did not have pounds).   So we went with our Euros and hoped it would work out.   We left the ship about 8:30 figuring the British would be prompt, and wandered back and forth trying to find our guide.  Finally after speaking to some other taxi guide drivers we were connected up with the man who had arranged our tour Mark.   He told us the vehicle was running a bit late due to a large group that came down late from the ship, was supposed to be out at 8am but didn’t make it out until 8:30am.   To make a long story short, by 10am we were frustrated and done with Mark’s lies and excuses for why our driver was late and said forget it we will find someone else.   He talked us into letting him hook us up with another driver, and thank goodness we got THAT driver rather than our originally planned one.   Our driver was great, however we did not get what we requested from Mark (no guided tours in the tunnels or the caves), and on top of all that the driver picked up two more people who were stranded at St. Michaels cave, so much for our private tour, and refused to drop our cost even though he was now making more money from them as well.   As the driver did a good job, and was really caught in the middle we didn’t push it.   At least in the end we did get a good driver although not all we planned on and it cost considerably more to pay him in Euro’s.  (I believe Missy figured we paid an additional $80 USD).

But enough of that, on to the good.   We first drove over to see the “frontier” where Gibraltar meets Spain, the border, which has the airport runway in the middle of it.  Interesting set up.   Not necessarily something we needed to see. 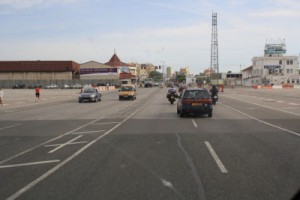 We next headed to the east side of the island to visit the lighthouse.   Everywhere we drove was evidence of the siege tunnels, gun holes and fencing etc. 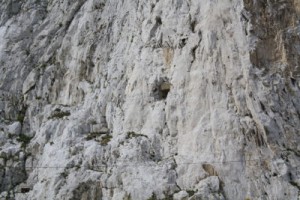 While we were looking at the lighthouse from a distance (no you do not get close up) our driver Douglas told us an interesting story about how when the island was cut off from the mainland (Spain was refusing any trade with them), they had no place to dispose of things like old cars, so they would just push them down a ramp into the ocean. 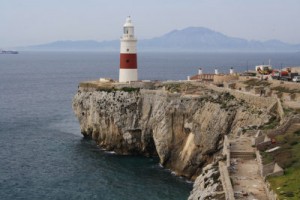 There was a mosque built right next to the lighthouse that a Saudi Arabian king had built there, originally he was denied permission when it was all military land, but when the land was turned over to Gibraltar he approached them again and was granted permission.    He built a large expansive mosque which was attended by some people from the “mainland aka Spain” emmigrated from Kuwait for a time, but had not been used recently.  The explanation we were given is that the Muslims living in Gibraltar were mostly from Morocco and did not believe in opulent worship halls so mostly worshiped in each other’s homes.

We next drove along the south side and saw where Gibraltar had turned many of the old war buildings and bunkers into homes.  I asked Douglas if mold was ever a problem and yes, apparently it can be.   We arrived at the 100 ton gun and went inside for a self guided tour.   There is a static display, followed by a trip up on the roof to see the actual gun.   The gun was never fired in anger. 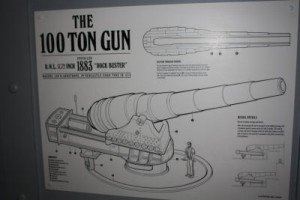 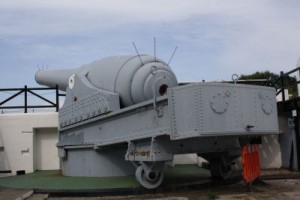 After this we headed up to St. Michaels Cave.   Very awesome and incredible, there is one area they have turned into a big theatre where they will hold concerts and shows.   You pretty much wander around the caves on your own checking things out. 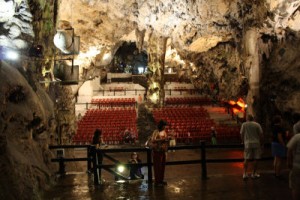 After leaving the caves we picked up our two new passengers, a nice couple from Germany, although the wife had lived in this area of Spain many years ago so was able to share things with us when looking out from the rock.   We stopped, in my opinion much too briefly at the Apes Den.   The Barbary Apes are the only wild primates living on the European continent.   They are all over Gibraltar and will sometimes wander into town and take things as well that are left unattended.    They were most likely brought over with the Moors from Africa over a thousand years ago.  The apes are wild animals and you are instructed to be careful, leave bags in the vehicles and not to have food on you as they will come after you.   We took lots of pictures and some videos.   At one point Ross went to touch one of the monkeys and was given a look of such indignation that it was hilarious.    As I was straggling back to the car to get a few more pictures one jumped on my shoulder as if he intended to come home with me, as it startled me I screamed and he scampered off right away. 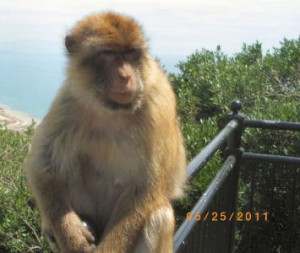 The roads up and around the rock are fairly narrow, barely two lanes.  The taxis will line up, and have you get out and walk up, and when your taxi catches up to you, it’s time to go.

Our next stop was the great siege tunnels.   These as well had a static display and while some people were getting a tour, we were not.  This was disappointing as there was really too much to read in a short time in the displays, so you are just skimming and not really sure what you are reading after a point.  In addition the signs keep telling you that the walk down is easy, but do not forget you have to walk back up again, so I believe we only went about halfway down.  It was also very crowded and several tour groups were in the tunnels at the same time, just not a real enjoyable experience.  The other set of “tunnels” we read about on Gibraltar were the World War 2 tunnels.   I believe that if I returned I would get a ride to those tunnels and take one of their guided tours rather than doing the more popular siege tunnels.   (and get more time with the apes, although I think Ross and Missy were okay with the short amount of time spent with the apes).     After this we drove towards the Moorish castle and Douglas asked if we wanted to go in (um yeah as it’s part of our tour).   This was pretty neat, but thankfully they had built more modern stairs inside (although you could see the old ones further below).  There were areas with the baths that were used by the Moors, as well as a prayer room that had later been used as a prayer chapel by the Christians.   Later in life the building had been used as a prison as well, I cannot imagine conditions were too good for the prisoners. 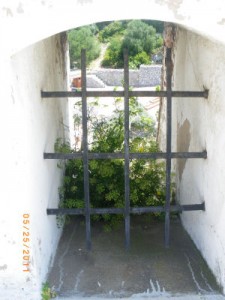 After this we headed back to town and were dropped off at the end of Main Street.   We stopped in a café called Latino’s to eat Fish and Chips (yes the irony was not lost on us).   We stopped in to visit a church and light some candles, picked up some postcards and a few other souvenirs, visited an old church and finally found some Gibraltar beer to bring back with us.   We walked to the end of Main Street and caught a shuttle back to the ship for 2 Euro’s each.

There was a sail away party up on deck as were leaving; it was pretty neat to be able to see Africa, Spain and Gibraltar all in one shot.   Gibraltar’s main business is tourism and as a transfer port for ships and/or goods going to or from the Med and Atlantic.    As such there were many ships docked in the bay area, and the port itself was very industrial looking with large fuel tanks.  (one of which exploded the following week injuring some passengers returning to a Royal Caribbean ship).

As we have done Gibraltar now, and our tour experience was less than stellar,  I would definitely do it on my own next time around, leaving more time with the monkeys, doing the WW2 tunnels, and perhaps some of the museums.

Cheers, Mic, Missy and Ross signing off from a small piece of the United Kingdom