I had some favorites in each area. In the character development area, a pastel of the “mine-mine-mine” seagulls had served as a reference for the final colors of the scene in the movie. A funny storyboard illustrated the storyboard process itself—it was a Joe Ranft pencil sketch, poking a little fun at the genius of John Lasseter as the story creator slaved over his ideas, only to have to redo everything once Lasseter took a look at it, but with the story creator still looking forward to starting on the next project at the end.

Toy Story and Toy Story 2‘s area featured early sketches of Buzz and Woody, who initially looked to be a ventriloquist dummy. In the Bug’s Life area, a blue-and-white thistle study was a stunningly realistic reminder of the old cyanotypes I’d studied in photography class. An acrylic painting of the “bug world as observed by humans” had a colorful, playful, Alice in Wonderland quality to it. Door concept drawings for Monster’s Inc. stood out to me for their playfulness, and looked a lot like the final art in the opening credits of the movie. I was impressed with a simple sketch of Sullivan and Mike, which looked like it was done with a fat marker, and recreated the usually highly detailed characters in just a few blocky lines. I liked that in a pencil sketch of Roz, the artist had to add another piece of paper to the end to get all of Roz’s tail in.

The Finding Nemo area was most striking because of the giant, wall-covering display of hundreds of fish, who were grouped into the same body types but each had a unique color, pattern, or texture, making them all look different from each other. Their digital filenames were printed under each fish, which was also funny to read, since they seemed to be named after characters on ’70s and ’80s TV shows, i.e., “UncleJesse_26.tif.” from Full House. Those wacky Pixar artists.

The sculptures I’d seen of The Incredibles characters turned out to be called maquettes, and were created before the characters were made digitally. The heads of Edna Mode were a little disturbing, since they were covered in grids, with each square marked with a one or a zero. I was surprised that it looked like her oversize glasses actually had clear lenses in them. 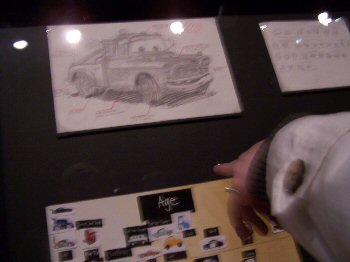 In the Cars area, I got a kick out of the car chronology, a timeline noting the earliest models of cars seen in the movie through the newest. Lizzie, Sarge, and Fillmore were on the far end, with Sally and Lightning as the most recent. A race car color study consisted of scraps of bold colors torn from what looked like magazine ads, cereal boxes—anything with a color that had inspired the artist to think it might work for a race car. I also liked reading the notes on an early sketch of Mater, called “Zeb” in the drawing. Pointing into Zeb’s truckbed, a note read “lots of stuff that seems impossible to draw.”

We watched a short film, Artscape, which used the art on display and seemed to bring you into the drawings and paintings. It was about 15 minutes long, presented on a wide, theater-sized screen. It was a brilliant idea, but ended up making us dizzy, so we headed out for one last peek: digital paintings of the new Pixar film Ratatouille. The “paintings” looked like Impressionist work, and were a great ending to the show. They seemed to combine the hand-drawn with the digital in the best way. They were so beautiful that I can’t wait to see the movie.

The Pixar exhibit has been featured at the Museum of Modern Art in New York, and I think is headed to Australia next. I’m glad we came across it, in such an unexpected place!

…and Mary Poppins in England 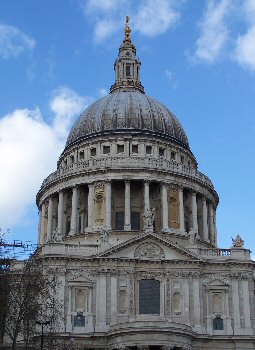 Okay, so the Mary Poppins musical debuted in London in late 2004, and in New York in late 2006, but I hadn’t seen it, so it was fresh and new for me. Plus, how could we resist visiting Mary Poppins in her home country?

We bought tickets to the show the day before, and spent that day sightseeing. Of course, we couldn’t completely ignore the Mary Poppins influence, and we had to visit St. Paul’s Cathedral in honor of the scene that still makes me cry every time, “Feed the Birds.” 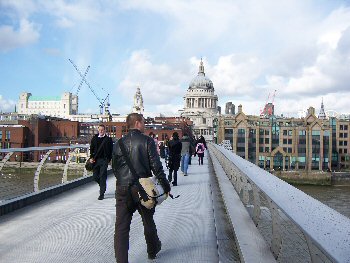 This doesn’t quite look like the neighborhood in the film! 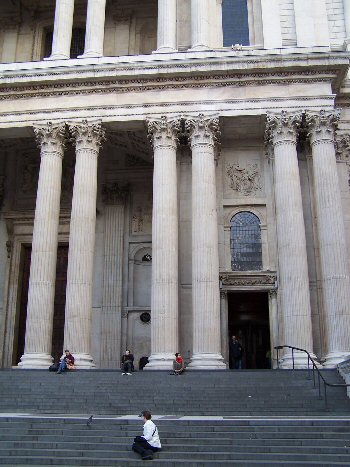 However, I think feeding the pigeons is discouraged here (I guess we’ll have to stick with the metaphorical meaning of the song instead). But I had to covertly sneak a couple of pigeons some crumbs from my sandwich. I refrained from breaking out into song. 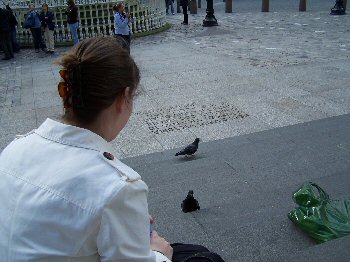 I fed the birds! I just did it a little more sneakily than I wanted to.

After our outing, Poppins night had arrived and I couldn’t wait for the show. I also couldn’t wait to hit the “Poppins Shop” in the beautiful lobby. 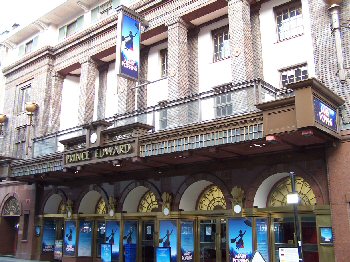 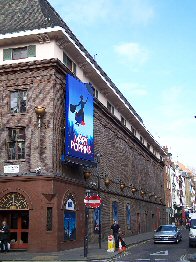 There is no question which show is playing at the Prince Edward Theatre! 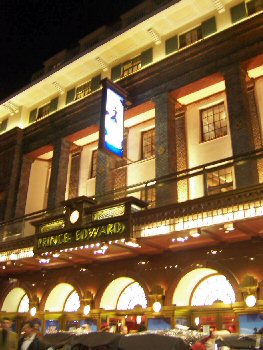 The theater dazzled us even more at night. 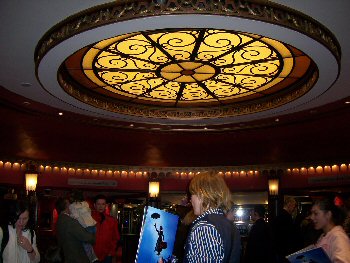 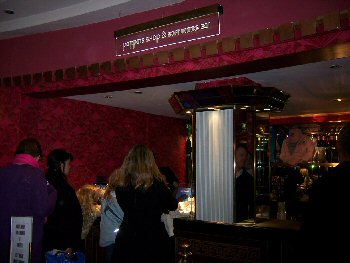 Lovely architecture and Disney merchandise—a great start to any evening.

The theatre itself was gorgeous—and we had great seats (in the center of the stalls), so we could see all the action practically perfectly. We had fun just waiting for the show to start—and after looking around the theater, I decided we needed to see more shows in such luxury. 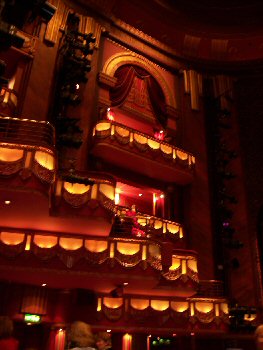 I was thrilled to hear the live orchestra play the beloved songs, and some new ones, too. I was so impressed with all of the actors in the show—we especially liked Bert, who had a great energy and enthusiasm. We were close enough that we could see all of his expressions, and he even had a Dick Van Dyke kind of style at some points, while also bringing his own attitude to the character. We found out later that it was actually Bert’s understudy we saw, Howard Jones, and I’m so glad he was performing that night—even with the magnificent set, lavish costumes, and new songs, we both thought he was the best part of the show. It was a little strange to see some of the events in a different order from the Disney movie, or to find some plot lines eliminated altogether, but overall, we really enjoyed our holiday with Mary in the West End.

Now, we’ll just have to plan a trip to New York so we can compare the States’ version of the show to the UK’s. It would be another non-Disney-oriented trip, but I’m sure that Disney will find us wherever we go. 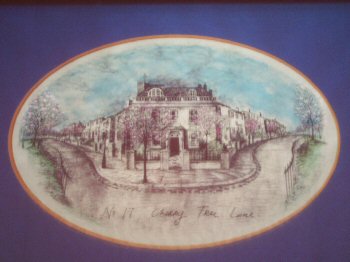 The curtain shows a drawing of Cherry Tree Lane before the start of the show.