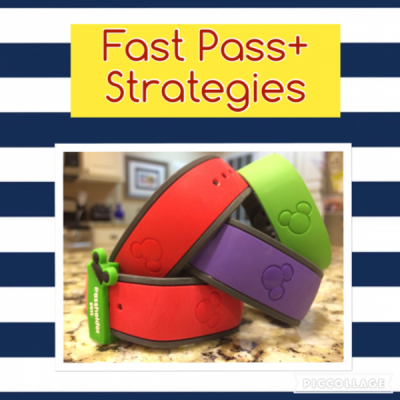 Your family is headed to Disney World.  You have put time into planning dining arrangements and hotel accommodations.  However, there is one more task to tackle at home before the big trip– planning FastPasses!

FastPass+ is Disney’s ride reservation system.  It comes free with your tickets to the park, and you are able to access the reservations on your My Disney Experience app and website.  For example, you can make an appointment to ride “it’s a small world” at 1:10PM on May 25.  While this system can be super exciting for folks who love planning, it can be daunting for others.

There is no right or wrong way to plan your FastPasses and there is no one-size-fits all!  Depending on your touring style, you’ll want to think through your own strategy accordingly?  Are you early risers or night owls?  Do you like to park hop?  Do you leave the park in the middle of the day for a break but come back?

Jocelyn and Missy are both seasoned Disney World planners.  Check out our planning strategies below as they both enjoy touring the parks differently.  We both have slightly different approaches as to how we go about planning our FastPasses!

Missy: For Magic Kingdom, I like to go in the mornings and the evening.  Ideally, getting to Magic Kingdom at park opening avoids the need to FastPasses in the morning.  Trust me, it is early, but it is definitely worth it.  You can generally walk on to the Fantasyland attractions and lines are short for the headliners.  I like to plan FastPass+ for this park starting around 5 or 6 p.m.  This is after we have taken a nap or a swim back at the hotel pool.

For those of you traveling with small children (too short to ride the coasters), I think the best choices for FastPass+ are a character meet & greet (we like Mickey Mouse), Peter Pan’s Flight, and Enchanted Tales with Belle.  We were able to get these starting at 5 p.m. and ending around 8 p.m.  These three choices are all either in Fantasyland or on the way to Fantasyland from the front of the park.  Since the locations are close to each other, it is easy to get a spot for the fireworks afterward.  You can also get a quick counter service dinner in between rides at Columbia Harbor House or Pinnochio’s Village Haus.

If you are traveling with older and taller children (or adults who love the thrills), I would use the FastPass+ on the Magic Kingdom mountain range– Space, Big Thunder, and Splash.  I would try to get on Seven Dwarfs Mine Train at park opening or park closing.  Personally, I love Seven Dwarfs, but my crew are not fans.  They think the carts are too small for their legs and the ride is too quick to waste a FastPass on it.

Jocelyn:  I, like Missy, like to get to the MK early!  Unless it’s our arrival day, we almost always rope-drop Magic Kingdom.  My three children are young, but my oldest two (7 & 6) are tall enough to do all of the Magic Kingdom attractions, and my youngest (3), can with the exception of Space, Splash, & Thunder.  Our typical touring style is to spend the day in the parks, but we eat an early dinner, say between 4 & 5 o’clock.  So we don’t usually leave the parks midday.  For us, we will schedule our advance FastPass+ reservations for midday.  We will get as much done early in the morning, typically in Fantasyland and New Fantasyland and use our FastPass+ passes for Seven Dwarfs Mine Train, Splash Mountain, and Thunder Mountain.  Since my little one isn’t tall enough for the last two mountains, I will reserve different FastPass+ for her and my husband (who isn’t a fan of any of the mountains).  I’ll start scheduling these around noon after the park has been open for a few hours.  If we are still in the park after we use our initial three passes, we will book more for whatever is available.  The reason I select these three is that 7DMT always still has a very long wait, and Splash & Thunder are not in Fantasyland where we spend most of the morning.  This strategy also works well when my youngest needs a nap – they may get one of their alternate FastPass+ done, then she’ll nap in her stroller for 1-1.5 hours and then they’ll get the last FastPass+ in.

Missy: FastPass is tricky at this park.  Because of the tiered system, you cannot get both headliners (Soarin’ and Test Track) for one day.  However, right now, Soarin’ is under refurbishment which means that Test Track can be your headliner attraction.  I would try to get this FastPass early in the morning and hit all of the attractions in Future World before 11a.m.  Then, at 11 a.m., you can head to World Showcase for some snacks and touring!

Jocelyn: When we plan our Epcot FastPasses, we generally have more than one day planned at the park as it’s one of our favorites!  This eliminates the need to choose between Soarin’ and Test Track – we select one on each day we’ll be there!  While you didn’t need a FastPass for many other attractions, the new system has spread out the crowds so sometimes it’s good to have your Tier 2 choices be Spaceship Earth & Journey Into Imagination.  Once we see where the Anna & Elsa meet and the Frozen Ever After attractions fall in terms of which Tier (guessing they’ll both be Tier 1), we’ll have to re-strategize!

Missy: Grab a FastPass+ for Toy Story at whatever time you can get!!! Then, you can plan the rest of your day accordingly.  Toy Story is super tough to grab since it is one of the few attractions at the park that ANYONE can ride.  (Although, I did take my 9 month old son on it and there might have been some vomit after we got off the ride… it’s a little swervy! ;0) I would use single riders for Rockin’ Roller Coaster.  For the other two FastPass+, I would pick Star Tours and Tower of Terror.  I would try to keep my FastPass+ times close together.

Jocelyn:  What Missy says… grab a FastPass for Toy Story Midway Mania ASAP!  Since Hollywood Studio also uses a tiered system, you have to really prioritize what attractions you want to grab a FastPass for.  Our must-do’s in the park (besides TSMM), are Tower of Terror, The Great Movie Ride, the Frozen Sing-along, Beauty and the Beast Live,  and the Disney Jr. show, therefor our Tier 2s are usually Tower or Terror and the Frozen sing-along for now.

Jocelyn:  Our go to plan for Animal Kingdom is to book an early ADR at Tusker House for breakfast – as close to or before 8:00 a.m. as we can.  We enjoy a delicious breakfast and hopefully exit by about 8:45 a.m., and are positioned extremely close to the Kilimanjaro Safari queue.  The Cast Members will keep you in this area until the guests start coming over the hill into Africa from the front of the park, but we’ve ended up on the first Safari Jeep many times doing this.  This frees up a FastPass unless we choose to ride again later in the day.  While the Festival of the Lion King is my all-time favorite attraction, we don’t ever need a FastPass for it.  We would use them for Kali River Rapids, Everest Expedition, and depending on what else we want to do for the third, it may vary.

Missy: We like doing the Animal Kingdom in the afternoon, right before the park closes, around 3 or 4.  Sometimes, we don’t even make Fast Passes for our Animal Kingdom day!  However, with the new nighttime experiences coming to Animal Kingdom, we are definitely going to make FastPass+ reservations for our upcoming trip.  Our FastPass+ choices in this park would be Kilamanjaro Safari, Kali River Rapids, and Dinosaur.  We often use the single rider for those who like to do Expedition Everest.  For the shows, we just make a plan to get in line about 15 minutes in advance of the show.  Finding Nemo the Musical is our favorite show in the whole resort!!

Overall, if I were planning a park hopping day, I would likely plan my FastPasses for my second park.  But my best piece of advice, is to book a FastPass for the attraction(s) you have to do, the one(s) you’d be really disappointed if you didn’t.  Then you’ll secure that you can experience them, and have a minimal wait to boot!  Don’t book three FastPasses for things you think will have long lines hoping your favorite attraction won’t.  Especially at the Magic Kingdom where there are the most options.  If you or your child must ride It’s a Small World, book that FastPass!
Good luck everyone!  May the FastPass+ Force be with you!

What are your tips for utilizing FastPass+? What strategies work best for you? Share in the comments section.

Missy is a life long Disney World fan. Her favorite mode of transportation is a monorail, and her favorite color is a royal purple pigment. When Missy is not at Disney World, she is planning her next trip to Disney World. When she is not planning a trip, she is working toward her PhD in Instructional Technology at Georgia State University. You can find Missy on Instagram as @missyballa