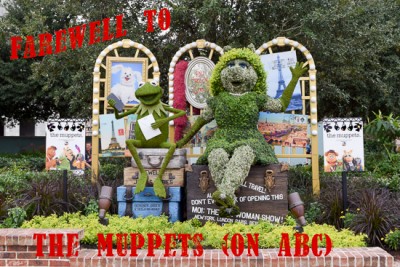 At the end of last week several of the TV networks officially cancelled some of their shows on the bubble. For readers here, the cancellations of the Captain America spinoff “Agent Carter” and the Alan Menken headed “Galavant” probably came as sad bits of news. For me, the saddest, even if not surprising, news was the cancellation of “The Muppets” on ABC.

As I mentioned in several of my episode reviews, especially toward the end of the season, the Muppets started with fantastic ratings, showing that there was interest in the Muppets in popular culture. However, that interest did not match up with what this show was offering. By the time the showrunners retooled and refocused midway through the season, the larger audience was already lost. By the end of the season, the ratings were still fine, but considering the other shows that were cancelled and the reported expense of producing “The Muppets,” those ratings just didn’t cut it.

But for now, let’s look back at some of the best moments of this short-lived series, and also look to the future of the Muppets.

We had Animal and Dave Grohl drum battle:

Great interplay between Rizzo and Pepe’:

The whole last episode arc and all the throwbacks to the Muppet Show:

But some of the best things about the Muppets were the one-liners. A few of my favorites:

Kermit: “Welcome to the morning meeting everybody, or should I say the whenever you decide to show up meeting.”

Fozzie: “You wouldn’t know anything about the City of Brotherly Love, Kermit. Probably because you live in the City of Meddling in Someone Else’s Relationship.”

Uncle Deadly: “Based on my experience, that’s Reno.”

And my personal favorite, after Kermit says that he feels awful:

And now, to the future…

First, one thing we know is happening is that Dr. Teeth and the Electric Mayhem will be making their live performance debut at the Outside Lands Music Festival in San Francisco:

Additionally, the Muppets continue to pop up in random places, most recently with Animal participating in a Drum Off at the Radio Disney Music Awards.

In the parks, with Muppetvision surviving the Hollywood Studios construction, the renaming of their area to the “Muppets Courtyard” on park maps, and the closure and refurbishment of Pizza Planet, there are consistent if unconfirmed rumors that we will be getting a Muppet themed restaurant sometime soon (please oh please oh please oh please).

If nothing else, the Muppets Studio Youtube Channel has continually made fun and entertaining videos over the years, and hopefully that will continue, whether it is through music videos:

Or just throwbacks to old sketches:

The sort of short sketch/song-based entertainment has always been the Muppets’ strength, so they could continue to succeed in this area.

And who knows, with Netflix, Hulu, Amazon, Yahoo, and everyone else wanting to produce their own content, the Muppets could still have a second-life on TV.

Either way, don’t put those lights away just yet:

For the time being, you can still check out clips and episodes of the Muppets here .