On our last vacation we took advantage of visiting the parks later in the day and night and sleeping in each morning to avoid being out in the heat of the day.  While doing this we found out that you can do some pretty awesome things during the late hours at the parks, especially Magic Kingdom!

During marathon weekend in January, the parks close earlier (8:00 p.m.) so we learned that if we wait in line for the Seven Dwarfs Mine Train we can get lucky and ride the train during the fireworks show!  It’s pretty incredible to be riding a roller coaster and having fireworks exploding in the sky right above you!  That is a memory we were able to make with the children, my husband and my parents.

Another fun thing we found by accident, is if you stay until the end of the night, the Main Street Vehicles will transport you to and from Cinderella’s Castle to Main Street to shuttle people back to the front of the park.  This was incredible.  One night we rode in the Omnibus, which is a gas-powered open-air 2-story bus.  They also bring out a Jitney which is an early automobile without a roof, a replica of a Fire Engine and some days the horse-drawn street car,an old-fashioned trolley pulled by a horse can be seen transporting guests. We had such a blast doing this, that we made sure to stay late the next night so we could ride these cars again! 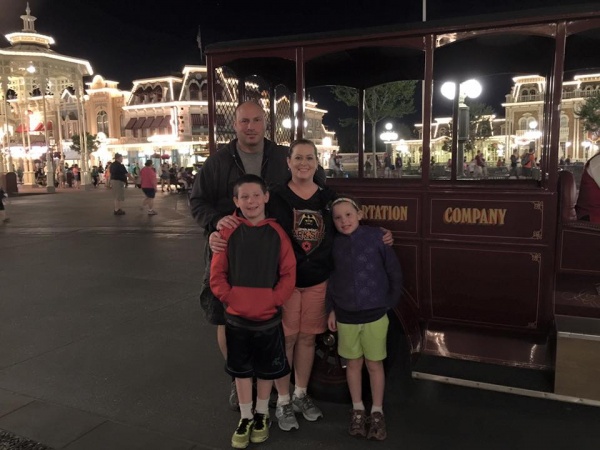 As the night is coming to an end and the park is closing, many people are rushing to the gates to get out to the monorail, ferry and buses. We have learned that this is a great time to get a Mickey bar or some popcorn and have a seat.  Take in the scenery, stroll around and take pictures.  Many areas will be less crowded because everyone else is trying to get back to their hotels.  I know of some friends who ran the runDisney races and were able to take photos of themselves with their medals while laying on Main Street with no one around!

So next time you are at the Magic Kingdom when it is closing time; don’t rush out.  Stick around and find out what happens when everyone else is leaving and you might find a little magic of your own!

What are some of the special things you like to do as the Magic Kingdom closes? Share them in the comments!