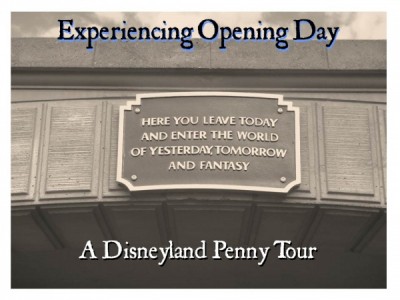 Sixty years ago the happiest place on earth, Disneyland, opened.  By most accounts, it was a difficult day.  There were many trials (plumbing strikes, excessive heat of over 100 degrees Fahrenheit, a tight building timetable, a live-to-air TV show, and counterfeit tickets that took the anticipated 6,000 guests to an estimated 28,000).  This day would later be called ‘Black Sunday’ because of the media outcry.  Some may mark this as a disaster, but that opening day and its TV show propelled the Disney theme park into history and made it both a pop icon and an industry leader that many others are emulating around the world.

And now, sixty years later, the world is currently celebrating their diamond anniversary.  But how can the average guest embrace a sense of history while immersed in the modern park that Disneyland has become?

Sadly, long gone are the admission tickets of $1.00 for adults, $0.50 for children 12-years and under – all required taxes included.  The ticket allowed its bearer to roam the grounds of the park and enjoy the free shows in each land.  There were restaurants and shops to explore, and, of course, the grand sets of the park itself.  There was an extra charge to ride the attractions; each ‘properly priced’ and the tickets were available from ticket booths in the various lands.  All of this is reasonable, but not available to the modern park goer.

So, while you await the special entertainment of your 60th anniversary visit you might like to travel back in time and visit all those attractions still found within the park’s walls.

Let’s begin our tour at the beginning…

“To all who come to this happy place: Welcome. Disneyland is your land. Here, age relives fond memories of the past, and here youth may savor the challenge and promise of the future. Disneyland is dedicated to the ideals, the dreams, and the hard facts that have created America, with the hope that it will be a source of joy and inspiration to all the world.” ~ Walt Disney, 17 July 1955.

Passing through the tunnels under the railway tracks (and their plaques reminding you that ‘here you leave today and enter the world of Yesterday, Tomorrow and Fantasy’) you enter Main Street.  The flagpole here features the dedication plaque. 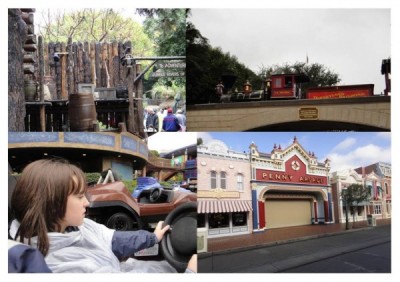 “Main Street, U.S.A. is America at the turn of the century – the crossroads of an era. The gas lamps and the electric lamps, the horse drawn car and the auto car. Main Street is everyone’s home town … the heartline of America.” ~ Walt Disney, 17 July 1955.

Here you can visit City Hall, the Fire Department, the Emporium, and any of the other buildings on Main Street.  They were all there, although many have changed their wares and their names.

Take a journey on the Horse-Drawn Street Cars (morning only), or take in an original Mickey Mouse cartoon at the Main Street Cinema (say ‘hi’ to Tilly.  She is one of Walt’s original employees, still doing the same job today that she did back then).

The Main Street Penny Arcade has long since lost most of its penny amusements in favor of the sweets from the candy shop one door down; however, some of the old amusements still reside here.  Have a look for Esmerelda, she is always happy to tell you your future.  Here too are some of the ‘tin men’ dancing machines, music machines, and flip movie machines.

And, of course, let us not forget that the train station on Main Street, USA is the beginning of a grand circle tour of the park.  If you want the most authentic tour, look to the #1 engine – the CK Holliday, or the#2 engine – the EP Ripley.   These two engines were there, pulling guests on the first day.  The rolling stock is considerably changed from those early days.  They are far more comfortable and many have been retrofitted with inward facing seats.  The wonderful Grand Canyon Display between Tomorrowland and Main Street stations is a newer add-on.

“Here is adventure. Here is romance. Here is mystery. Tropical rivers – silently flowing into the unknown. The unbelievable splendor of exotic flowers … the eerie sound of the jungle … with eyes that are always watching. This is Adventureland.” ~ Walt Disney, 17 July 1955.

Adventureland has undergone many facelifts since opening day, but those stout of heart can still journey the great rivers of the world on the Jungle Cruise.  Okay, it’s true that back on opening day the skipper’s spiel was much more like a Disney’s True Life documentary (with none of the groan-inducing jokes), but you can still ride Ganges Gal or Congo Queen – the two riverboats that traveled the rivers back in the day.

Moving on to Frontierland

“Here we experience the story of our country’s past … the colorful drama of Frontier America in the exciting days of the covered wagon and the stage coach … the advent of the railroad … and the romantic riverboat.  Frontierland is a tribute to the faith, courage and ingenuity of the pioneers who blazed the trails across America.” ~ Walt Disney, 17 July 1955.

Frontierland too has gone through many changes since those first days.  Long gone are the stage coaches and pack mules; even the Golden Horseshoe Saloon no longer runs its brand of good old Wild West entertainment.  You can, however, stroll the wooden walkways of the old Davy Crockett Arcade (now Bonanza Outfitters), Frontier Trading Post, and the Golden Horseshoe Saloon.

You can partake in one attraction from opening day: the Mark Twain Steamboat.  A steamboat has featured in Walt’s very early drawings of Disneyland.  He even privately financed the steamboat when the bank refused to extend finance for it and held his wedding anniversary party on the boat just days before the park opened.  Back on opening day, there was very little to see from the steamboat; this has been improved substantially over the years. 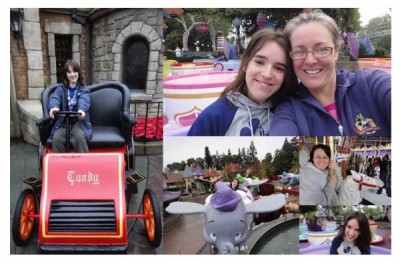 The drawbridge to Fantasyland

“Here is the world of imagination, hopes and dreams. In this timeless land of enchantment, the age of chivalry, magic and make-believe are reborn and fairy tales come true. Fantasyland is dedicated to the young at heart — to those who believe that when you wish upon a star, your dreams come true.” ~ Walt Disney, 17 July 1955.

The drawbridge did lower on opening day.  Through the arched portcullis the painted ponies of King Arthur Carrousel drew the children in.  Here is a mixture of the old and new.  Originally, the facade of the inner castle courtyard was decked out in medieval faire style (unlike today) and several of the attractions have been moved from their original locations.

The first attraction, as noted above, was the King Arthur Carrousel.  The beautiful white horses that adorn the deck today were once rows of bay, black, tawny, grey, and chestnut steeds – their coats given the eye attracting white in the 1980’s remodel.  Spinning nearby was the whirling Mad Tea Party.  The Storybook Canal Boats were known as the Canal Boats of the World.  Mr Toad and his Wild Ride were there to greet the children of 1955; as was, Snow White’s Adventures (now called Snow White’s Scary Adventures).  Changes to Snow White’s ride to include Snow herself.  Originally, the guest lived the adventures as the princess.

The last original attraction in Fantasyland was Peter Pan’s Flight.  Like the other attractions, Peter has had a few facelifts.  His last has just recently opened, included with amazing effects, pixie dust, and an entirely (well, mostly) new London. The ride is as innovative and special as it was on opening day.  For those of you looking for the original in the attraction, make sure to wave at Nana in the nursery.  This amazing, wonder dog is the same animatronic as opening day.  Also, the ‘stone’ statue in London park has been keeping sentinel the full sixty years.

Alas, some of our old time favorites – such as Dumbo the flying elephant – were not included in the opening day extravaganza.  But if you are happy to include later opening 1955 attractions, considering they will also celebrate their sixtieth birthdays through the year, then you could ride Casey Jr Circus Train (opened July  31, 1955) and Dumbo (opened August 16, 1955).

The ever elusive Tomorrowland

“A vista into a world of wondrous ideas, signifying man’s achievements … a step into the future, with predictions of constructive things to come. Tomorrow offers new frontiers in science, adventure and ideals: the Atomic Age, the challenge of outer space and the hope for a peaceful, unified world.” ~ Walt Disney, 17 July 1955.

A land based on the technology and knowledge of tomorrow was a colossal undertaking.  How do you keep it fresh and current when advancements in science happen every day?  This is still a challenge for the Imagineers today and this land has been gutted and re-imagined more than any other in the park.

History buffs can look for the only other ‘opening day plaque’ at the entry to Tomorrowland.  Then head to the far end of the land and take a ride on Autopia.  Make no mistakes, the drive has changed substantially from those first days, but the excitement of being a kid and able to drive your own car still entices children of all ages.

As with the beginning, so is the end

There are so many little things still around in the park today.  Several of the guided tours delve into this history.  For those of us who have decided to do the penny tour above, make your last stop for the night at the Fire Department.  Here, on the second floor, is Walt’s apartment.  Look up into the window and you will see a light burning brightly (during Christmas season the light is swapped with a small twinkling Christmas tree).  Some believe that Walt still resides here, so make sure to thank Uncle Walt for sharing his dream and then say ‘goodnight’.

What are your favorite memories of some of Disneyland’s original attractions?