Walt Disney’s dream for Disney World included a self-contained town, E.P.C.O.T, where people could work, live, shop and play. Although his dream was not achieved as envisioned, the Walt Disney World we know today has come pretty close. You can shop, dine and play throughout the resort. But, in Downtown Disney (DTD) you can do all three, and there is no admission fee (except for some of the “adults-only” venues).

The Lake Buena Vista Shopping Village officially opened on March 22, 1975. The area has undergone many changes over the years. During the evolution, the name was changed to the Walt Disney World Village and later The Disney Village Marketplace. In 1996 it took the name it still has today: The Downtown Disney Marketplace. The entire complex, which is now comprised of three distinct sections, has evolved into over 120 acres of shops and restaurants surrounding the 35-acre Buena Vista Lagoon.

During the late 1980s, Disney officials saw a need for a place where adult guests and locals could enjoy evening activities. They created Pleasure Island, which opened in 1989. Surprisingly, it is not named after the Pleasure Island in the Pinocchio story, but has its own backstory. Imagineers created a fabricated history based on the fictitious character Merriweather Adam Pleasure. As the story goes, Pleasure was a businessman who owned the buildings as part of his shipping company. A storm destroyed the business, Mr. Pleasure vanished, and the buildings were left in ruins. The buildings were refurbished from the run-down waterfront into bustling nightclubs.

Like the Marketplace, Pleasure Island has also undergone its share of changes. For example, there used to be an admission fee to enter and it also used to be closed during the day. In 2005, Disney got rid of the admission fee and gates and since then has only charged to enter the nightclubs. As a result, guests can stroll unobstructed from one end of DTD to another (previously Pleasure Island was a closed roadblock between the Marketplace and West Side, which were open all day). On the downside, the carefully crafted backstory is no longer a part of the area. The adults-only area has moved to a more family-friendly atmosphere.

Another expansion in the ’90s saw the opening of the West Side. This entertainment side features an AMC movie theater, Virgin records megastore, DisneyQuest and the Cirque du Soleil theater.

With the many changes throughout the years, Downtown Disney has remained a must do for most WDW visitors. What is it that keeps people heading to DTD? Simply put: it is fun!

First things first: How do you get to DTD? Well, that depends on where you start. From Saratoga Springs, Port Orleans or Old Key West, you can get there by boat. From all resorts you can catch a bus; often during the day the bus also goes to Typhoon Lagoon. There are two bus stops once you get to DTD: one at the Marketplace and one at Pleasure Island. Although busses run one hour after Pleasure Island closes, we prefer to drive. Parking is free and we always seem to get a great spot near the World of Disney. Plus, we do not want to lug all our purchases onto a bus.

So, now that you’re there, via boat, bus or car, what exactly is there to do at DTD?

Shopping: Let’s begin our journey through DTD with one of my favorite activities: shopping. There are so many unique and interesting places to shop. My first trip to DTD, I was surprised how many stores were there. One of the best times to visit DTD is Sunday morning. Everyone is either in church or asleep. No crowds, great shopping.

The most popular signature stores are:

World of Disney: if it’s a Disney product, it’s probably here
Bibbidi Bobbidi Boutique: inside World of Disney, where your child (or the child in you) transforms into a princess
Once Upon a Toy: Mr. Potato Head and lots of toys
Virgin Megastore: two huge floors of music, movies and more at the West Side
Lego Imagination Center: The most awesome Lego store ever

And now in alphabetical order:

Whew! Although you will not find any theme park-specific merchandise (you will have to buy that in the parks), most every other kind of souvenir you could think of can be found here. Also, if you are an Annual Passholder, you get a 10% discount at the World of Disney and Basin. I love shopping in DTD. 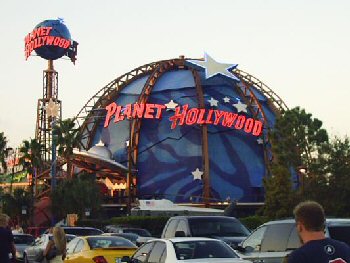 Restaurants: Now onto my next favorite thing to do at WDW: eating! There are many great restaurants in DTD. Again, to get a feel for the number of diverse eateries, there is a list below. If they are on the Disney Dining Plan, there is a “DDP” next to the name. For Location, MP=Marketplace, WS=West Side, PI=Pleasure Island. And away we go…

Now for the quick service restaurants in DTD: 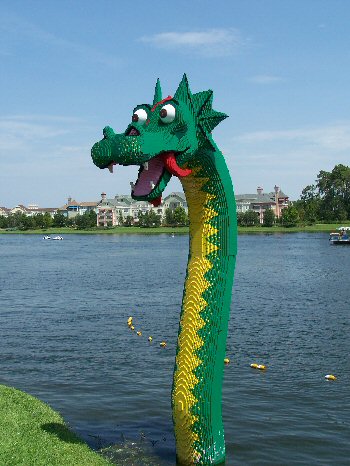 Play: So you say you want to have some fun after all of that great food and the theme parks aren’t enough for you? You don’t want to spend a day’s theme park admission but still want a diversion on property? You got in your nap in the afternoon and you are ready to go?  You want the nightlife, you want to boogie? DTD has all of that too!

Fun for all ages:

AMC Movie Theater: largest theater in the Southwest- all the latest release movies, all stadium seating and very comfortable.
DisneyQuest: it’s virtual magic, a theme park in a “box”!
House of Blues: great live shows, plus a tasty gospel brunch on Sundays!
Cirque du Soleil: with La Nouba, a special made-for-WDW performance. Outstanding!
Let’s not forget the Carousel and Train Ride for the little ones. There is a fee for them, but the kids like them so much, we usually go at least twice.

So you got your groove thing on, and want to shake it:

As if all of this isn’t enough, Downtown Disney is host to several special events during the holiday season:

So now that you know about all the wonderful things to do at DTD, I am sure you want to know the hours of operation. Although they vary slightly by season, here are the basics:

Downtown Disney is a wonderful place to relax, dine, shop and play. I love the theme parks, but DTD is the perfect place to spend the day doing three of the things we love to do while at Disney. It is part of the Magic that should not be missed. And since there is no admission fee, anyone can grab some Magic anytime.