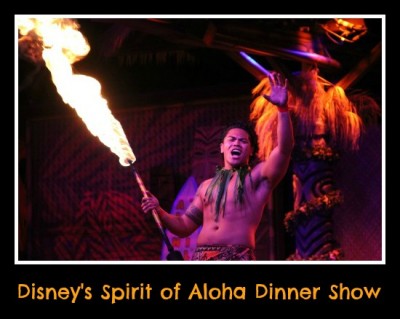 The Spirit of Aloha dinner show is a unique dining experience at Disney’s Polynesian Village Resort that combines music, dancing, and food into an entertaining evening for guests of all ages.  You won’t find another show like it at Disney World!

After making a reservation online a few weeks ahead of time, we arrived at the Polynesian around 7:30 to check in for our 8:15 show. The quick and easy check-in left us with some time to kill before the show began, so we walked around and explored the shops in the hotel. 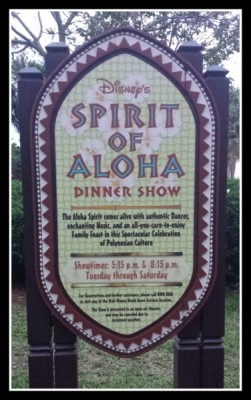 At 8:00 p.m., we headed outside and entered the outdoor theater where we were each given a lei to wear to get in the spirit of the show.  Though we didn’t dress up, many guests did.  Feel free to wear your Hawaiian shirts; you will fit right in!

After our photo op, we were escorted to our table.  When I made the reservation, I was able to choose the section that I wanted to sit in, but not an individual table.  Prices vary depending on the level you choose.  We were on the main floor and had a pretty nice view of the stage.  Although I don’t think there is really a bad seat in the house, it would be a nice option to be able to choose an exact table. 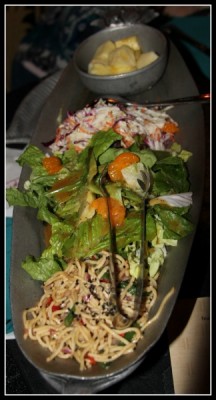 A variety of appetizers

An appetizer platter was waiting for us on the table when we arrived.  The platter included salad with mandarin oranges, soba noodles, coleslaw, fresh pineapple, and pineapple-coconut rolls.  I really enjoyed the noodles and the salad, but the rolls were my favorite part! So unique and yummy. The only thing I wasn’t crazy about was the coleslaw, which was surprisingly bland.  Although the meal is all you care to enjoy, we did not feel the need to ask for seconds as we were nearly full from the appetizers…and there was more food coming!  A selection of soft drinks, sangria, and some beers are included with the price of the meal which is nice. 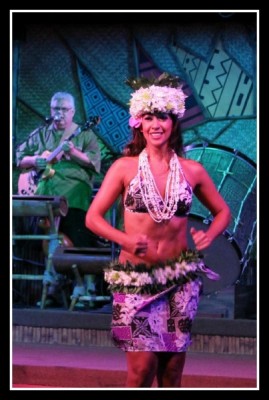 Soon, the show began.  The first part was very light-hearted and included some voluntary audience participation.  There is a storyline to the show about one of the local girls moving away, but unfortunately, it was hard to hear because of the noise of the restaurant and I found it a little difficult to follow.  I wished that the sound had been turned up a bit for the dialogue. 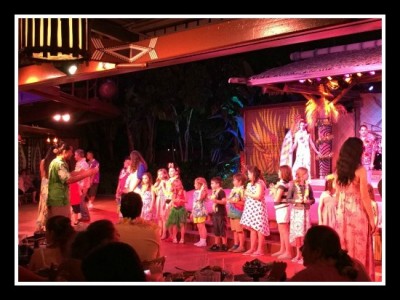 The kids learn the hula

The cast invited the kids to the stage (and the adults if they felt so inclined) to learn how to hula.  A little later, I found myself up front as well when the cast called everyone who had a birthday that month to come up. I am not usually one to hop up on stage, but this was silly and fun so, why not?  (Plus, there were about 30 other people up there, so I wasn’t the only one celebrating my birthday with a hula!)

Sometime after the kids’ dance and the birthday celebration, the house lights came up and our main course arrived.  If you are a meat lover, this dinner is for you!  Our platter included chicken, pulled pork, ribs, vegetables, and steamed rice.  The chicken was tender, but the pork was a little on the dry side.  I discovered that the rib glaze made a good sauce for the plain, white rice.  We made it through about half of the platter and we were stuffed…and dessert was coming soon!

Before I knew it, our server announced last call and we ordered our final drink refills. Dessert arrived and when I saw the portion of pineapple-caramel bread pudding that we were served, my first thought was that there was no way that the 2 of us were going to finish all of it.  It was delicious, however, and I continued to pick at it throughout the remainder of the performance. By the end of the show, we had indeed eaten all of it! 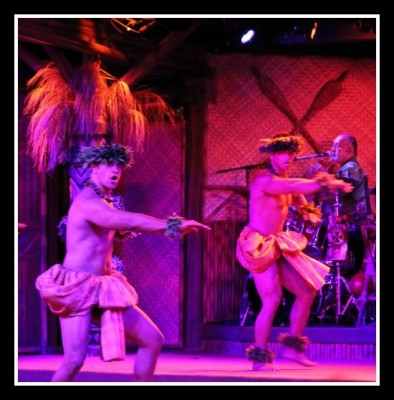 The second half of the show included more of the traditional dances and costumes that I had been looking forward to.  Of course, they save the best for last, and at the end of the show was the fire dancing.  Everyone was in awe! It was so exciting! 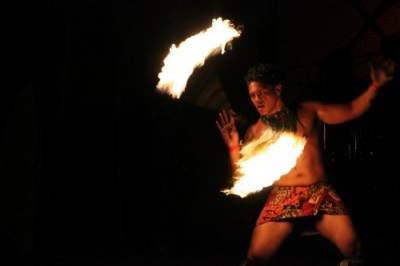 The fire twirling was amazing

The show ended around 10:00 p.m. and as we exited the theater, the Wishes fireworks show was just beginning at the Magic Kingdom.  We hurried over to the beach at the Polynesian Resort and caught part of the show.  It was an unplanned grande finale! 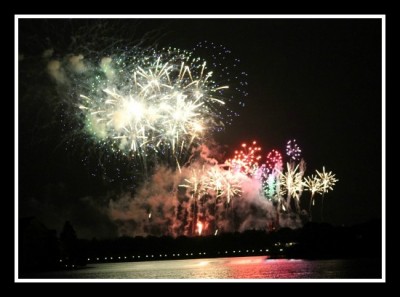 One thing to keep in mind when booking a reservation for this show is that the theater is outdoors and weather may affect the performance.  I saw the show in April and it was still very pleasant outside.  I was a little worried that it would be hot, but there were fans that helped quite a bit.  In July or August, it may be too hot for comfort. However, occasionally, the show will get cancelled in the winter months due to cold temperatures.

Overall, I enjoyed the show.  The fire was especially thrilling and the dances were entertaining.  There are so many things at Disney that I like to do and see again and again, but I wouldn’t put this show in that category.  I really enjoyed it, but I think once was enough for me.

Have you seen the Spirit of Aloha show at Disney’s Polynesian Resort?  What did you think?