Kringle is a very lucky manatee.

Just before Christmas of 2008, Kringle, who was really just a baby, got lost. Somehow he ended up in northern Florida, alone, in water that was unexpectedly cold. Manatees don’t do well in cold water, and Kringle was ill and weak when he was spotted at a marina on Christmas Eve. The Manatee Rehabilitation Partnership sent people out to find him, and when they did he was in rough shape. They took him quickly to a place where he’d be cared for, treated by vets with manatee expertise — and have plenty of visitors.

Kringle probably doesn’t realize quite how lucky he is. Many of us would LOVE to live where he does: right inside Epcot. Of course, he doesn’t get to go on any rides or get his picture taken with Mickey. Kringle’s “recovery room” is in The Seas area, on the second floor level observation area. He’s had thousands of visitors since he was brought to Epcot, and probably very few of them know about Kringle’s story — or about Disney’s involvement in animal rescue.

Manatees are large, gentle (they eat only plants) marine animals who live in the Florida waterways and coastal waters and are considered to be at risk of extinction primarily because they are so often injured or killed by boaters. The Manatee Rehabilitation Partnership connects state and federal government organizations and organizations which can provide homes and care for injured manatees until they can be released. Disney is one of those partners. Each of the manatees you’ll see in Epcot was brought there as part of this rescue program, and will be treated by Disney vets and prepared for release by Disney animal caretakers.

Jane Davis, Aquarium Curator, Disney’s Animal Programs, The Seas, shares the story of Kringle’s arrival at his new home. Lou, an older manatee who has been at Epcot for many years (and who probably will not be able to be released, due to the severity of the injuries he received during an encounter with a boat propeller) had until recently shared his tank with Bock. Bock had been successfully released into Blue Spring State Park (you can follow Bock’s travels since then at http://www.wildtracks.org/Florida/hp_boc.html). Now Lou was alone, and Davis says nobody was quite sure how he’d react to Kringle’s arrival. 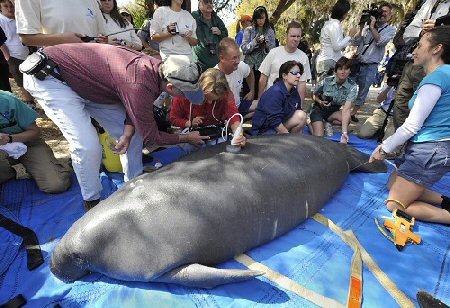 Bock on his release day.

“We’re just beginning to understand how manatees behave socially and how they communicate,” Davis says. “They are not generally aggressive animals, but you never know.” Kringle was moved into the tank and everyone watched anxiously. Lou observed Kringle from his side of the tank for a few minutes at first, then gradually swam closer. The two manatees slowly swam around each other, a bit warily. Then Lou moved in to the much-smaller Kringle and wrapped his fins around him, holding him tightly in a manatee-style hug.

“At first we thought ‘oh no’ but then we realized he wasn’t attacking, he was accepting him,” says Davis. Lou then took Kringle on a little tour of the tank. “It’s like he was showing him, see, here’s where we eat, and here’s where you can go to rest, and this is the backstage area,” Davis recalls. After that, their friendship was solid. After his months in Disney’s care, Kringle is growing well and catching up to his buddy Lou in size, but you can still see them sometimes playing together in their tank.

Kringle is missing a front flipper but does just fine without it. He’s recovered well from his time in the cold water and is healthy enough that plans are already being made for his release. Part of the planning involves teaching the manatees the skills they need to live in the wild. This will be easier with Kringle, Davis says, than it was with Bock, because Kringle’s had some previous experience. Bock was rescued as a very young baby along with his twin sister Amber, and had no real experience of life in the wild, so the group spent extra time preparing him and watched him closely once he was released. Not only has Bock done well, he’s actually met up with Amber again and the two of them have spent time just hanging out together in the Florida waters.

Lou and Kringle are just two of the rescued animals being cared for in Walt Disney World. A large number of sea turtles are also brought to the Seas each year, many of them with their shells injured by run-ins with boats. The turtles are cared for by the veterinary team, rehabilitated in the Seas, and then released back into the ocean. Research conducted at the Seas has developed new treatments to help the injured turtle shells regrow more quickly and with fewer complications. 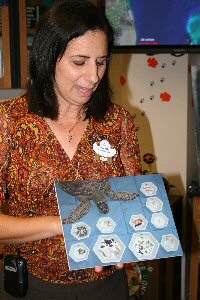 Other turtles end up in need of rescue because they make themselves sick eating garbage. Not the fast food and candy type of garbage — real garbage, the kind that is unfortunately floating around in large quantities in the ocean. In Rafiki’s Planet Watch, you can see a display of the many pieces of plastic and packaging that were removed from just one sea turtle’s stomach. Disney CM’s named him “Little Crush.” When Little Crush was released, a monitor attached to his shell allowed the researchers to track his movements and see how far he traveled — adding to our understanding of sea turtle behaviors.

Disney also takes responsibility for the wild animals found throughout the Walt Disney World property. One snake, for example, had surgery to remove a golf ball from his digestive system — apparently, he thought it was an egg with a harder-than-average shell.

So next time you’re at the Seas, and have finished singing along with Nemo and his friends about the “Big Blue World,” take a minute or two to visit Lou and Kringle. For us, it’s a chance to see these fascinating creatures up close, but for the manatees and other creatures who are rescued and rehabilitated at WDW, it may be their only chance for survival. Knowing how much Walt cared about the wild animals of the world, I think this is something he’d be very proud of.