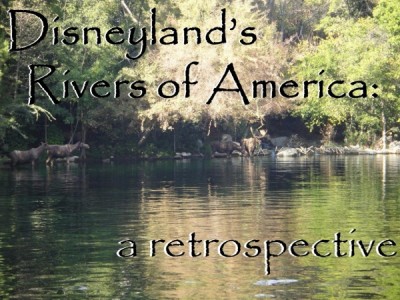 ‘The Rivers of America to close for Star Wars Land’ was the headline on the info-splash my friend tagged me in on Facebook.  My heart stopped. After all, one of the many things that make a ‘Magic Kingdom’ park is the brilliant use of water.  In Disneyland (the prototype of these types of parks) you will encounter many ponds, pools, rivers, and other forms of water.  The water adds to the ambience because of the connection between water and adventure.

My friends know my love of the Rivers of America and the experiences found there (a quick look at my past posts will confirm my interest on the Disneyland waterways).  Hence they wanted to warn me that my beloved waterway and its attractions were closing.  Over the months before the Rivers’ closing, the press releases filtered through and I found that the grey clouds over the waters were not as dire as originally portrayed…but there would be change.

“Disneyland is like a piece of clay: If there is something I don’t like, I’m not stuck with it.  I can reshape and revamp.” ~ Walt Disney, as quoted in The Quotable Walt Disney by Dave Smith

Walt Disney had every intention to continue to change, improve, and develop Disneyland as demonstrated often in his interviews, inter-office messages, and letters.  The Rivers of America were no different from the other areas of the park.  In this blog I thought that we should take a trip around the Disneyland Rivers of America as it has changed through time. 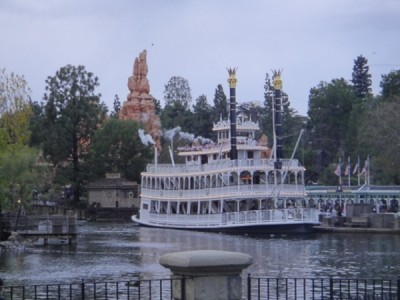 From the earliest concepts of a ‘magical little park’, Walt Disney had three consistent attractions.  The first two were a train and a ghost house; the third was a lake with a reproduction of a river steamboat.  This park, originally envisioned for a small lot beside the Disney Studios is often referred to as the ‘Riverside Drive Park’, the ‘Studio Park’, or ‘Mickey Mouse Park’.  Whatever you call it, Harper Goff worked on beautifully detailed maps of the small amusement area that shied away from the normal amusement fair and included green ways, relaxation, and cleanliness, eventually became Disneyland.

Many Disney fans have heard that Walt and his team built Disneyland in 12 months – from ground breaking to opening day.  What some may not know is that Walt took a personal interest in what would become the Rivers of America and the iconic Riverboat, Mark Twain.  Both of which were part of the opening day back on July 17, 1955.

It was decided as the plans began to transform from Mickey Mouse Park into Disneyland that the ‘lake’ idea for their boat adventure might not hit the mark.  Walt wanted a bit more of an adventure. He was so focused on this attraction that Walt mortgaged his family home to pay for the Mark Twain to be financed.

As with many things related to the very beginning of Disneyland, who drew up the original designs for the River of America is hazy.  But we do know that Walt was not wholly satisfied with the outcome.  Reports say that he sent the plans back for ‘fixing’ several times but still did not agree with the design.  So, the night before the ground breaking for what would become the Rivers of America, Walt took the project home and worked on the design himself.  The paper plans that he brought back the next day were the ones used to make the waterway.

Once the banks where settled, the river (or rather, a large pond with an island in the middle) was filled with water.  The sandy substrate of the pond, allowed the water to run straight out, so a clay layer was added to the river to help hold the water in.  This clay clouded that water and hid the tracks of the largest attraction in the water, the Mark Twain.

The Mark Twain and the Rivers of America actually hosted guests before the official opening of Disneyland.  On July 13, 1955, Walt and Lilian Disney celebrated their 30th wedding anniversary with a party in Frontierland.  This included guests sailing on the river boat and enjoying the entertainment in the Golden Horseshoe.

Your only option for touring the rivers on opening day was to travel on the Mark Twain Riverboat.  Back then, your tour would have been very different to now. The waterway was the same, the track the Mark Twain took was the same, but the scenery would have been very different.  The banks of the river (and the island as well) were bare mounds of turned ground because there was no time to add any landscaping to the banks. 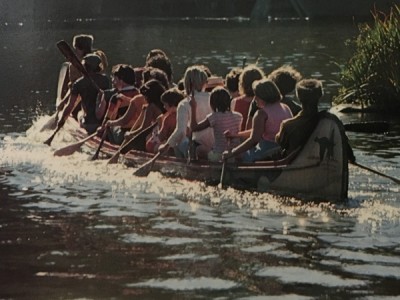 As the year progressed, the Mike Fink Keel Boats began their run.  By December 1955, both the Gullywhumper and the Bertha Mae were chugging round the yet unnamed Island.

1956 marked the addition of the Indian War Canoes (now called the Davy Crockett Explorer Canoes).  This attraction allowed Guests to expend some of their excess energy to power their way around the island.  This was also the year that the central isle of the rivers was opened for visits. 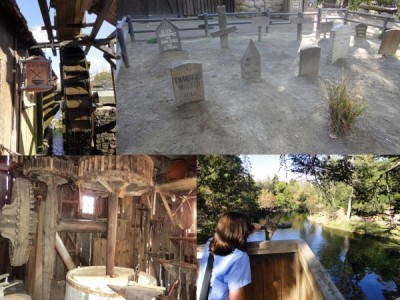 Tom Sawyer Island was hand designed by Walt Disney.  He wanted to add the excitement of childhood adventure found in the books by Mark Twain, with caves, treasures, barrel bridges, treehouses, an old mill, and a fort where younger (and older) guest could shoot the marauding Indians.

Also arriving in 1956, the Rainbow Caverns Mine Train steamed along the Living Desert.  Parts of this ride could be seen from the river boats. 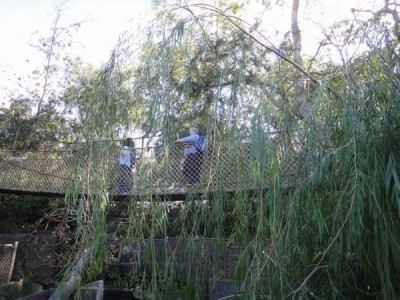 The river way was still very popular.  To increase the number of people on the water and to include another portion of American history, Disneyland added the Sailing Ship Columbia in 1958. 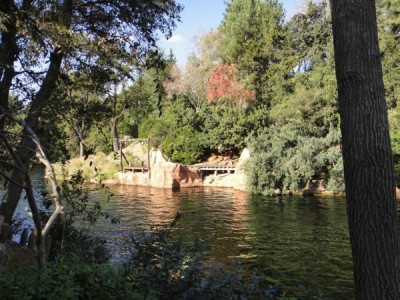 The Rainbow Caverns Mine Train was refurbished and the track lengthened to include a loop along the Rivers of America’s banks.  The attraction was renamed the Mine Train through Nature’s Wonderland.  With the track upgrade, the Rivers’ bank was upgraded to include waterfalls, trestles, and caves. 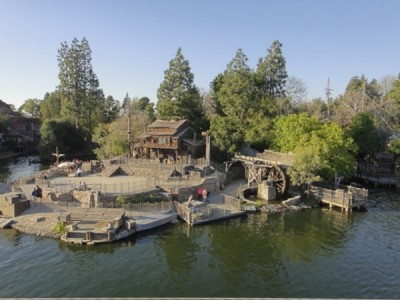 The next big change:

It was 1992 and a buzz hit Disneyland.  In September, Fantasmic! the night-time spectacular came alive on the waterways.  This came along with early closing of the Island on show nights and a refit of the section of the Island closest to New Orleans Square.

The Mike Fink Keel Boats continued to run until May 17, 1997.  This date is famous amongst fans of the Rivers of America, because that is the day that the Gullywhumper rocked and then tipped over with a full load of guests.  Neither the Gullywhumper nor the Bertha Mae ever sailed again. 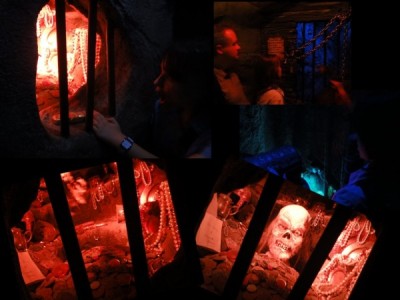 And the Pirates invaded:

Tom Sawyer Island was updated again in 2003 when the pirates from across the waters came to hide their treasure.

And that brings us to January 2016, where major changes to my beloved waterways.  Star Wars Land is forcing the change of route of both the train and the Rivers of America.  Tom Sawyer Island will lose some of its land and the river will be reduced in length substantially; however, we will be getting a return of the trestles and waterfalls.  So, bring on the changes.  We will miss the Rivers as they used to be, but we will embrace the new adventures in a galaxy far, far away. 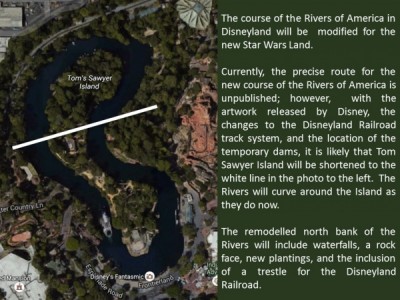 What are your thoughts of the Rivers of America at Disneyland and the proposed changes?